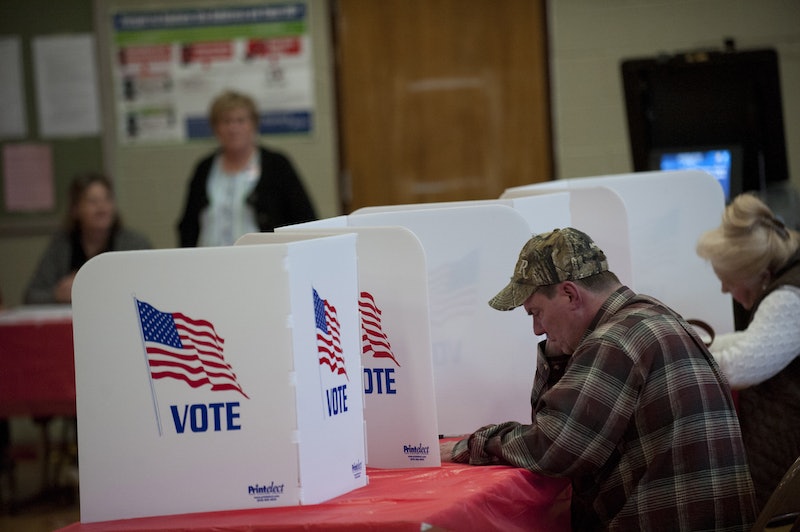 Tuesday morning, the city of Brussels was hit by three terrorist attacks, which killed dozens and injured more than 200. That same day, Utah, Arizona, and Idaho are voting in Republican and Democratic presidential primaries, deciding which candidates will receive the states' delegates at the party conventions this summer. Following the news that three Americans from Utah were wounded in the violent assaults, the attacks in Brussels could affect Western Tuesday.

The Church of Jesus Christ of Latter-Day Saints issued a statement identifying three Mormon missionaries from Utah who were seriously injured in the attacks: 66-year-old Richard Norby, 20-year-old Joseph Empey, and 19-year-old Mason Wells, all of whom were serving in Paris. The missionaries were near one of the explosives in the Brussels airport, and were subsequently taken to the hospital.

As news emerged of the American victims' identities, GOP frontrunner Donald Trump encouraged voters in Utah to vote for him because he's "proven to be far more correct about terrorism than anybody." He didn't acknowledge the Utahans injured in the brutal attacks, but he was clearly trying to take advantage of the situation to gain votes in one of the few states which Ted Cruz is slated to win. The question is: Will it work?

Utah was more affected by the Brussels attacks than most states because of the three natives injured (not to mention how it happened the same day they take to the polls), so voters may very well take candidates' counterterrorism plans into account more than they would have just yesterday.

However, this isn't likely to result in voters switching their preference from Cruz to Trump, as the two Republicans' plans to prevent a similar attack in the U.S. are pretty parallel — namely, stopping Muslim refugees from entering the country and using extreme force to halt ISIS' power. Trump claims to be the toughest candidate when it comes to national security, but Cruz's plans are just as violent (he said Tuesday that his plan for ISIS following the Brussels attacks would be "carpet-bombing them to oblivion").

If anything, these attacks will probably encourage more Utahans to vote in the two primaries. The world has been terrified by ISIS' violence since the Paris attacks in November, and the incidents in Brussels only reminded Americans of the threat. The sudden increase in fear could propel more people to go out and vote for the candidate they think will best protect them and the nation. Whether that's Trump, Cruz, John Kasich, Hillary Clinton, or Bernie Sanders will become clear once the votes are counted Tuesday night.