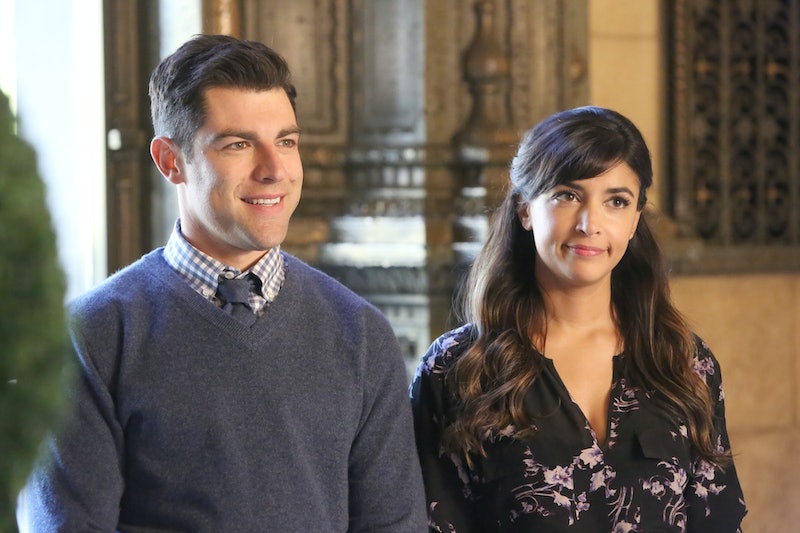 Ever since the show began, fans have constantly found themselves asking one very important question: What is Schmidt's first name on New Girl ? And yet, time and time again, the writers have refused to give us an answer. However, now that Schmidt and Cece's wedding is just around the corner, the odds of that elusive name finally being dropped has reached an all-time high. In fact, series creator Liz Meriwether recently admitted to TVLine that, when it comes to revealing Schmidt's identity during the upcoming nuptials, she and the writers are definitely "leaning that way." But until that time comes, the writers are clearly having a good time trolling us, which was more than proven during Tuesday night's episode "D-Day" when Schmidt was trying to select a wedding invite.

Right off the bat, Schmidt was holding up two different wedding invitation options for his friends to choose between. And while one of the choices only had the word "Schmidt" in the announcement, the other clearly had his first name on it, though, it was conveniently covered by Schmidt's own finger. But that wasn't the only time the writers toyed with our emotions. When Schmidt'd dad, Gavin, arrives at the apartment to meet up with Jess, he stumbles upon the wedding invite that contains his son's first name, which is — what do you know — obstructed by a piece of paper and later under Gavin's finger.

It was basically like the writers were waving the name right in front of us, only to snatch it away at the last minute. We were thisclose to learning Schmidt's first name only to be foiled by well-placed objects and fingers time and time again. (Well played, New Girl. Very well played.) So for me, this has to mean that they intend for us to find out the answer soon. Otherwise, all of this teasing is just downright cruel. We just need to have a little more patience, that's all. Then hopefully we can finally put this never-ending mystery to rest. But in the meantime, let the speculations continue!

More like this
Does 'Locke & Key’s Ending Mean There Could Be A Season 4?
By Sophia Moore
Every Horror Movie Reference In The 'PLL: Original Sin' Premiere
By Alyssa Lapid
'The Sandman’s Ending Is A Departure From Neil Gaiman’s Comic Book Series
By Kadin Burnett
Netflix Just Rebooted A Classic ‘90s High School Drama
By Maxine Harrison
Get Even More From Bustle — Sign Up For The Newsletter