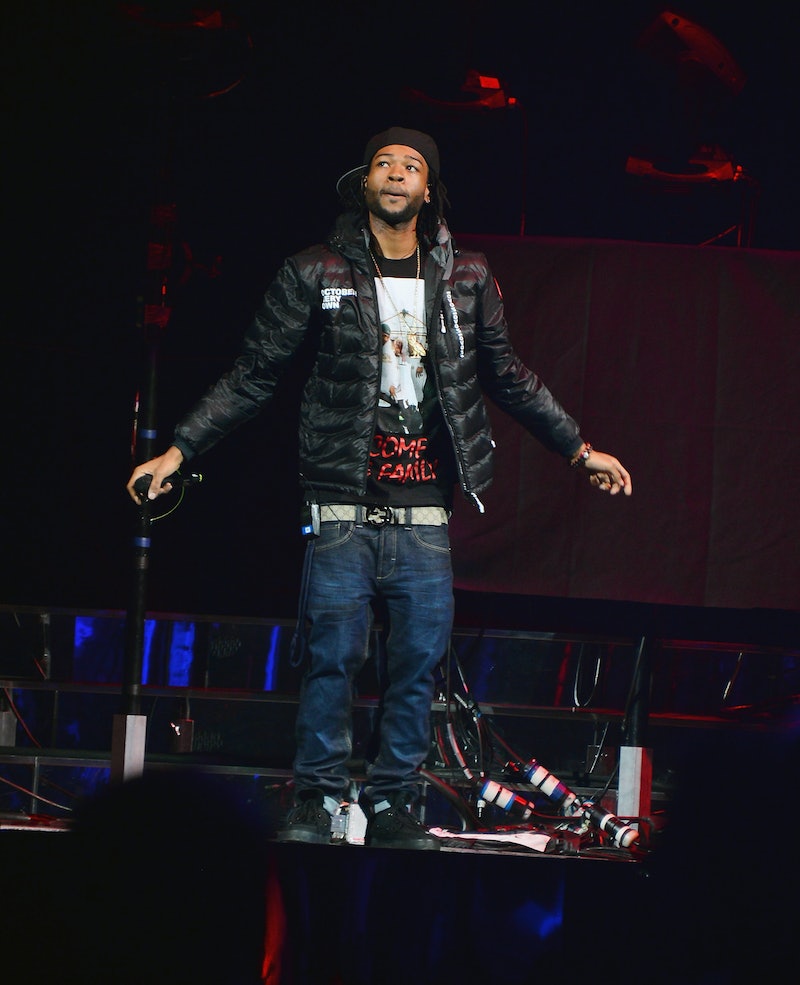 If you're still impatiently awaiting Drake's Views From The 6 (dear god Aubrey, where is it?!) and you've listened to "Work" by Rihanna on repeat for his verse (which pales in comparison to the goddess that is RiRi), don't worry: Drake is featured on a new track by PARTYNEXTDOOR, "Come And See Me." The single, which was released last week, is not the first collaboration between Drizzy and PARTYNEXTDOOR (real name: Jahron Brathwaite). But who is PARTYNEXTDOOR, besides a friend of Aubrey Drake Graham?

Even though he came onto the scene in 2013, it appears PARTYNEXTDOOR never actually did an interview until 2015, but he's been called the best part of OVO Sound for his varied talents and evocative, emotional brand of hip-hop.

Like Drake, PARTYNEXTDOOR also hails from the north and is a native of Mississauga, Ontario. His mother is Jamaica and his father Trinidadian, and PND told Fader that he appreciates how diverse Canada is: "You'll see an Asian person with the strongest Jamaican accent and you won't even look at him funny in Canada, cause you understand."

The 22-year-old R&B vocalist signed to Drake's label OVO Sound back in 2013, but the singer/producer/writer was mixing music long before that under a different name, Jahron B.

Despite growing tons of fans for his lush mix of hip-hop, R&B and EDM, PND had been very under the radar until his Fader story in 2015. But the singer said he wasn't trying to stay out of the public eye. "I would never call myself mysterious. The word I use is 'private," he said. "I'm not hiding from pictures. When you see me, I'll say whassup." Or, as MTV put it after he gave them his first recorded interview in May 2015, "PND is only here for the music."

Though he's only 22, PND has actually been working his ass off in music for years. Growing up in the suburb of Mississauga, PND was actually discovered by a manager who found his music on his MySpace page, according to his Fader interview. After that, he moved to Los Angeles, and got a deal to write songs for acts like Justin Bieber, but none of them were produced.

All the better, because PND ditched that gig soon after when he realized it wasn't what he was supposed to be doing, and started making extremely personal music of his own, eventually trying to get a deal as a solo act: "[I said] just let me sing my songs and sign me as an artist. Cause this is the only music I'm going to make. I created my own world, and you're gonna have a hard time shopping this," he told Fader. That is, until he was discovered by OVO Sound's co-founder Oliver El-Khatib through an email. When Drake first heard him, he apparently said: "Yo, that Party kid's nice."

The announcement of his signing to OVO Sound was low-key, with the release of "Make A Mil" on the October's Very Own blog in 2013. PARTYNEXTDOOR's first single, "Over Here," featuring none other than Drake himself, peaked at number 47 on the Billboard Hot R&B/Hip Hop chart. The rest of 2013 was just as sweet for him: In October (when else?) the singer released his first self-titled mixtape, which he produced himself, followed up by his first full-length studio album PARTYNEXTDOOR TWO in 2014.

PND was also featured on two of the best tracks on Drake's Nothing Was The Same,"Come Thru" and "Own It." On If You're Reading This It's Too Late, PND produced "Legend," "Preach," and "Wednesday Night Interlude" — the last a song that's all his own, the only one on the album that doesn't feature Drizzy himself.

When asked by MTV what he thought it was about his music that helped him connect to his fans, PND said, "By giving them everything. Hopefully, things that they haven’t seen." He also said that his music was 100 percent a product of his personal life: "If I'm not going through something, I don't record. I can make beats all day and wait for me to lyrically fill that vibe and void, but if I have nothing to write about, I’m not going to write anything."

PARTYNEXTDOOR is working on a new album, P3, but there's no release date yet. Until then, you can listen to his new track with Drake on SoundCloud: