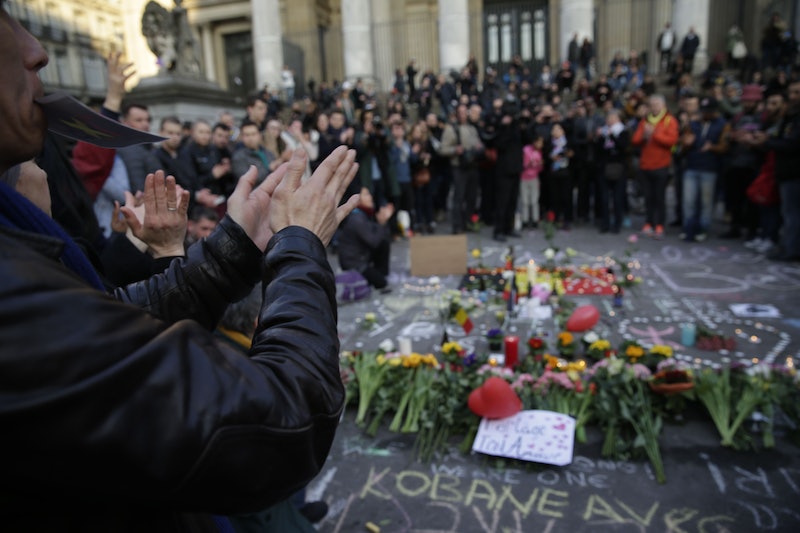 Grief in the age of the Internet is such a complex animal. When we're faced with tragedy, particularly one on an international scale like the deadly Brussels attacks that struck early Tuesday morning, it's become commonplace to see Facebook and Twitter feeds explode with posts, colorful profile picture filters, and hashtags offering condolences and solidarity. It's also just as common to see reminders that violence, destruction, and hatred occur on a greater scale in places beyond the West — and that such instances are seldom given the same attention.

After all, it is heartbreaking to see that such an outpouring of love and support was not afforded to the people of Turkey following attacks on Ankara and Istanbul which occurred earlier this month (and resulted in scores of fatalities). The same thing also happened when both Paris and Beirut were both attacked in November 2015, just a day apart. Dozens were killed in Beirut, but that attack received almost no attention or grief compared to the Paris attacks the next day.

It's crucial to start these kinds of conversations about which countries and which incidences we mourn for without invalidating people's right to publicly grieve and without sounding like you're voicing an insensitive "well, actually ..." kind of message when people are confused, scared, and hurting. Just the same, it's important to highlight our shortcomings and the double standards that plague our media coverage. It's not as simple as telling the people who didn't tweet support for Turkey that they have no right to express sadness at Brussels (because policing grief is really, really uncool). And it's also not okay to try to silence the people who are (justifiably) upset about the underwhelming response to the attacks in Turkey. Navigating this situation requires a bit more nuance.

We mourn differently in 2016. We do a lot more externalizing. We write on the social media walls of lost friends, we share intimate memories with strangers through digital elegies, and we process unimaginable things by shouting into the void. At times, it's easy to forget that behind every post, there's a person grappling with a world that's senselessly violent and unfair.

If we're going to be honest, social media doesn't make it easy to tell whether someone's sharing a genuine, vulnerable moment or if they're simply slapping a hashtag or filter on their post to earn some extra likes. If you're prone to cynicism, it's easy to dismiss all such posts as hollow platitudes (or worse, a kind of social currency move) — especially when there are obvious disparities as to which people receive that public sympathy.

But ultimately, it's important to remember two things:

Especially in times of tragedy and suffering, it helps to remember that the world holds countless complex, painful truths at the same time. We need to keep talking (and listening to marginalized voices when they speak up) about why these stories matter, and how the lives lost in Turkey deserve the same attention as the lives lost in Brussels. We can't stop looking complexly and critically at ourselves, and that includes the ways we grieve and the ways we consume media.

Most importantly, though, we can't forget to be kind to one another — in person and through our screens.

More like this
Windrush Victims Are Still Waiting For Compensation
By Sam Ramsden
For These Abortion Clinic Volunteers, Going TikTok Viral Is A Risk Worth Taking
By Audra Heinrichs
5 Ways To Stand In Solidarity With Women In America From The UK
By Sophie McEvoy
How To Fight For Reproductive Rights, Based On How Much Time You Have
By Courtney Young
Get Even More From Bustle — Sign Up For The Newsletter