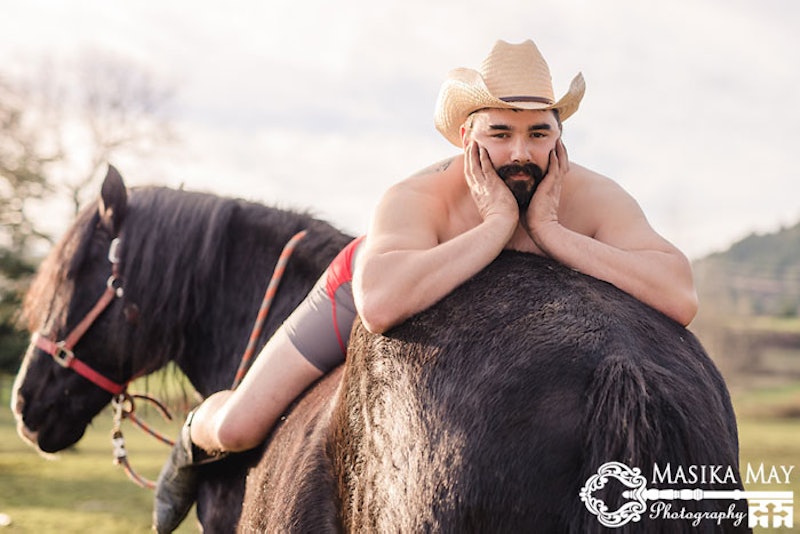 Over the last five years, Canadian photographer Masika May has shot plenty of weddings and family portraits, but the photos that have garnered her national attention are a little more risqué. She knows that more than just a speedo and buckets of courage are necessary when a man does a "dudeoir" boudoir photo shoot and now her latest farm-themed series of intimate dudeoir pics has gone viral. The featured model, Patrick Barry, was encouraged by his wife, after seeing Masika's previous dudeoir shoot, to take these sexy photos. Using the farm they own as a country backdrop, the results are almost better than apple pie straight out of the oven.

Masika May's journey with “dudeoir” photography started in January when Brendon Williams commissioned a sexy photo shoot as a gift for his wife's birthday. Well-versed in typical boudoir and pinup photography, Masika took her skills for showing off women’s curves in lacy lingerie and applied them to her male client. “I posed him almost exactly how I pose my female clients and these photos are the result. He made them into a photo book for his wife and she was pretty much ecstatic about them,” Masika May told Design Taxi. Sporting a beard, hairy chest, banana hammock, and little else, Brendon’s shoot was refreshingly real.

After posting the pictures on Facebook, the photos were reported, leading Masika to crop them and repost the album. Once again the photos were reported, and frustrated fellow users began posting comments coming to her defense. “They show pics & videos of people being tortured & murdered etc, this is just innocent fun, nothing wrong at all. Its some keyboard warrior too afraid to voice or show themselves but like to spoil it for everyone else,” wrote Debbie Faulkner on the thread.

Many pointed to the inherent sexism of Facebook's policies, such as Deanna Quesnel who wrote, “I'd like to also say that in a way it's sexist that Facebook would take them down! It would totally be okay of it was a woman and not a word would be said! Shows how much people judge the different genders!” The media soon joined the fight against the revealing photo double standard, and Facebook conceded, reposting the original photo album.

Undaunted, Masika plowed ahead with her second dudeoir shoot, and it may be even better.

If you search "dudeoir" online you will find most of the men featured have washboard abs and the razor sharp cheekbones of a professional model. May's photos go against the mainstream ad aesthetic, featuring regular guys with “dad bods.” She wants to highlight their “voluptuous beauty” and share this “sensual masculinity” with the world.