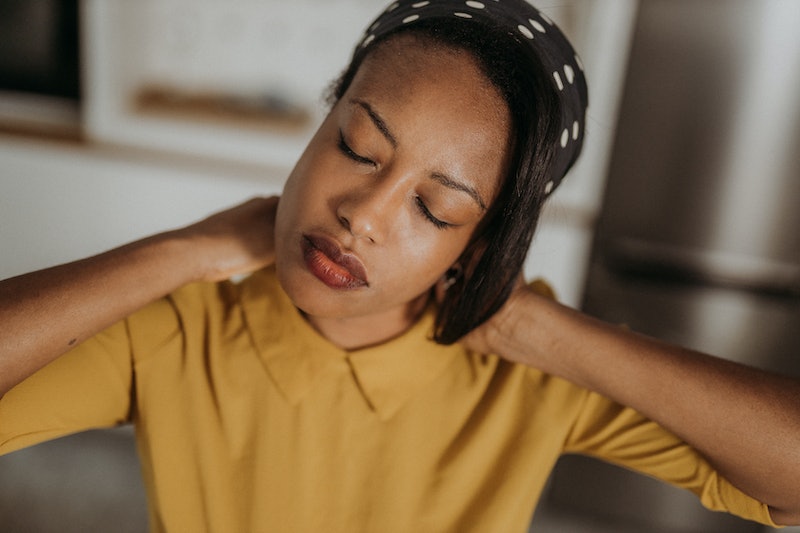 Though you may feel terrified after learning that you have endometriosis, it's important to remember three things: it's incredibly common (according to some estimates, up to ten percent of women of reproductive age have endometriosis), it's not infectious, and it's not deadly. Endometriosis doesn't "develop" into cancer or do anything nasty that will end up seriously injuring you. That's not to diminish the suffering of a person with endometriosis, though. Cases can range from mild to severe, and all areas on the scale have their own particular agonies. It's also a highly misunderstood and not-often-discussed disease; because it's a "women's issue," it's been ignored and often misdiagnosed for many decades, and we're only now beginning to see it emerge into the spotlight.

A lot of famous women have come forward about their endometriosis lately; Lena Dunham devoted an issue of her newsletter to the illness, while Padma Lakshmi revealed that her ex-husband Salman Rushdie's negative attitude towards her endometriosis — she wrote in her memoir Love, Loss, And What We Ate that he called her a "bad investment" due to side effects from the illness — contributed to their divorce. Many of these accounts carry an undertone of frustration regarding how little people understand about the condition and its impact on daily life and health — something we need to set about changing.

So here's your chance to get fully educated about endometriosis. The nine facts below will help you sort misconception from fact, and support anyone in your life suffering from endometriosis (or help you explain to others how to best support you, if you have endometriosis yourself).

1. It's Caused By Uterine Tissue Growing Outside The Uterus

The uterine lining is made of a very particular kind of cell. Endometriosis occurs when that cell type spreads beyond its natural place (inside the uterus) and attaches itself to other organs. The serious symptoms of endometriosis occur because those cells do exactly what they'd do if they were inside the uterus: they thicken and then shed as a "period," except that there's nowhere for the shed tissue to go. Repeated shedding can cause scar tissue, blood build-up and serious inflammation.

2. It's More Common Than You May Think

The most common assessment of endometriosis sufferers is that it affects 10 percent of women of reproductive age. If you think that adds up to a spectacular number, you're correct. Endometriosis likely affects 176-178 million women worldwide, and 5.5 million of them are in the USA alone. So why don't we know more about it?

Most specialists attribute this to the fact that women's reproductive issues have been hidden behind a veil of secrecy for a lot of human history, and that "lady problems" are still poorly diagnosed, rarely discussed and little-understood in many parts of the world. A Guardian investigation into endometriosis treatment in the UK found that many women went undiagnosed for years and had their reported symptoms disbelieved or underplayed by medical professionals and friends. The fact that some doctors tend to take women's reports of pain less seriously (The Atlantic did a damning exploration of that issue in October 2015) because there's an underlying perception that women exaggerate or are "hysterical" probably contributes. If you have a number of female friends, chances are strong that at least one (and likely more than one) is suffering from endometriosis.

3. We're Not Entirely Sure Why It Happens To Particular Women

A lot of myths about endometriosis have abounded over the years. Some medical theories in the '70s and '80s suggested that endometriosis was only really an issue for Caucasian women who'd delayed having children; many people still seem to believe that it's not really an issue for young women. Both of these myths, as it happens, are complete nonsense; endometriosis can happen to women of all races, ages, and reproductive statuses — teenagers, young women, older women, people who've had kids and people who haven't. Endometriosis generally doesn't seem to respect any kind of boundary. But why does it occur at all?

As it happens, we're not clear on that one, either. A number of possible causes have been suggested for endometriosis, though it seems likely that multiple factors probably contribute to how and when it pops up. One of the most likely, according to the Mayo Clinic website, is retrograde menstruation, which happens to most women and involves a bunch of uterine tissue that should have been expelled in a period instead traveling backward into the body. Why it might get stuck there in some ladies and start to grow is, however, a bit of a mystery; one theory is that something called metaplasia — a cell development where the retrograde menstruation "prompts" other cells to become uterine lining cells, too — happens.

Other suggestions about endometriosis's causes include genetics, a problem with the immune system, something special about the lymphatic system or bloodstream that allows the cells to spread through it, and uterine cells being accidentally spread by surgical incisions. There's also a theory that an environmental toxic substance, dioxin, might prompt endometriosis, but while studies suggest it might cause illness in some animals, there's been no research conducted about what it does to humans.

4. It's Not Just About Painful Periods

Chances are that if you're a non-sufferer, what you've heard about endometriosis revolves around periods: that they're painful, heavy, cramp-filled and generally deeply unpleasant. But it's important to point out that periods aren't the end of the story when it comes to endometriosis, and some women who deal with the illness don't actually experience all that much pain during periods at all. Rather, endo is more about a spectrum of symptoms, including pain at other points in the menstrual cycle.

Symptoms of endometriosis beyond painful periods include painful sex, general abdominal pain, bleeding through the menstrual cycle, fatigue, rectal bleeding, difficulty getting pregnant, and possible digestive issues, like bloating or indigestion. It's not a tick-box condition, though; you can have only one of these symptoms and still be an endometriosis sufferer.

5. Its Impact On Fertility Is Complicated (But Not That Bleak)

The "endometriosis = infertility" equation is actually a lot more complicated than it looks. Though it does seem that the condition (particularly the scar tissue it forms) can have an impact on your fertility, one thing we do know is that endometriosis doesn't necessarily mean you can't become pregnant. By some estimates, as many as 70 percent of women with endometriosis are fertile.

6. Hormones Can Play An Important Role In Managing Endometriosis

This is an interesting one: if you're diagnosed with endometriosis, you may not realize that your options involve hormonal treatment. Doctors may recommend hormones, including hormonal contraception, as a treatment for endometriosis for two reasons: regulating or diminishing the menstrual cycle will obviously help reduce the pain of uterine tissue shedding all over the body during a period, and estrogen levels seem to be linked to the growth of uterine lining tissue. The more estrogen one has in one's system, it seems, the more uterine tissue is prompted to grow — so a hormonal course of treatment, whether it's the combined pill, progesterone, GnRH agonists or Danazol (those last two are designed to block the menstrual cycle from happening at all), may be a reasonable treatment option.

7. Hysterectomy Is A Last Resort

There is no cure for endometriosis. Remember that, because there are many myths about things that might make it vanish that are actually quite misguided. One of them is the idea that removing your uterus will fix things.

But a hysterectomy won't actually solve your endometriosis problems, so if you're diagnosed, don't immediately agitate to have your uterus taken out. People who believe this myth are forgetting something pretty important: the real issue for endometriosis sufferers is the uterine tissue outside the uterus, so getting a hysterectomy won't take away the real source of the problem, as long as you still have hormone-producing ovaries.

The only hysterectomy type that can actually stop the issue is the removal of your ovaries as well, but this won't actually be recommended as a first line of defense (and if it is, seek a second opinion).

8. Pregnancy Does Not Cure Endometriosis

Here's another myth to be wary of: Pregnancy isn't a method of "curing" endometriosis. Rather, it just removes the menstrual cycle's periods for a time, without prompting the removal or changing of the rogue tissue causing the issues. After a baby's born, the symptoms will begin to recur. If your doctor recommends that a baby will "cure" endometriosis, their resources are outdated and you should seek another source of advice.

9. Getting Diagnosed Can Be Tricky

So now you feel educated about some of the key issues of endometriosis, and ready to take on the problem. But you may be unprepared for the complex process of diagnosis. If somebody says they "might" have endometriosis, it doesn't mean they're hedging their bets; it means that they're probably in the process of having things investigated.

Endometriosis can only be absolutely diagnosed with surgery — namely a procedure called a laparoscopy, a type of keyhole surgery in which the surgeon examines and sometimes takes small samples of potential endometriosis tissue. However, before they get to that point, many women have pelvic exams, ultrasounds and MRIs to see if there's another culprit behind their issues. Only if other problems have been ruled out does a surgeon recommend a laparoscopy, and further diagnostic tests may still be needed thereafter. So don't hurry anybody with a potential diagnosis to say yes or no; they're likely investigating every option they've got.