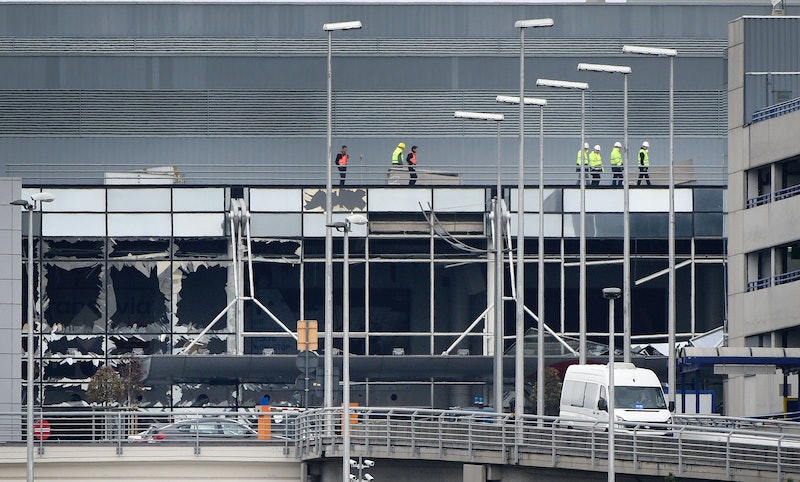 Since police announced the manhunt for Najim Laachraoui on Monday, he has become a key figure in the terror investigations in both Belgium and France. First he was connected to a Paris attacker, Salah Abdeslam, and the suicide belts used in Paris, then he was identified as a suspected Brussels attacker caught on security camera footage — but then a Belgian prosecutor said he may not be. His alleged arrest even made the news, although those reports were proven incorrect. Now, he is still on the run.

Other details about Laachraoui — such as comments from friends or family — have not yet emerged. As the search continues more details may arise about his background. Meanwhile one thing is clear: despite all the confusion he's a key suspect in both the Brussels and Paris attacks.

The alleged ISIS bomb maker had long been mentioned in public — but by his alias, Soufiane Kayal. The 24-year-old Belgian traveled to Syria in 2013 and used fake identity documents with that name after returning to Europe sometime before September 2015, when he went through a border check on the Austria-Hungary border. At that time he was traveling with Abdeslam and a third individual.

Then, someone using that same name went on to rent a house about 30 miles south of Brussels that was searched in connection with the Paris attacks. Furthermore, since the November attacks, investigators have found his DNA on all the suicide belts used there. It was also found in the house where the bombs are believed to have been made which was also near Brussels. The Paris connection is clear.

Then, on Wednesday, Belgian media reported that one of the suspects shown on the airport's security camera was Laachraoui — the man dressed in white on the right. The individual was seen leaving the airport just before the blasts. But a Belgian prosecutor Frederic van Leeuw denied that it was Laachraoui at a press conference Wednesday afternoon.

Hence the confusion. It seems what van Leeuw said on Monday seems to hold true:

The role of each one, is still too early to confirm. We have a lot of pieces of the puzzle and lately, more pieces have found their place, but we are still far from having completed the puzzle.

But, despite the stumbling by Belgian media, there is little doubt that Laachraoui is connected to both plots — even if that's not him in the photo. In the same car with Laachraoui and Abdeslam in September at the Austria-Hungary border check was Mohammed Belkaid. He was shot dead by police at a safe house in the Brussels suburb of Forest on Tuesday. That's the raid that led authorities to Abdeslam's arrest.

Well, who rented the house? Khalid El Bakraoui did, using a false name. He's one of the two brothers connected to the Brussels attacks. Prosecutors confirmed that he was the suicide bomber on the metro Tuesday. His brother Brahim was one of the suicide bombers at the airport. More details will surely clear up all the links, but one thing is for certain: Laachraoui is a key person of interest.

More like this
It Took Investigators 23 Years To Correctly Identify Helen Wilson's Real Killer
By Brad Witter
For These Abortion Clinic Volunteers, Going TikTok Viral Is A Risk Worth Taking
By Audra Heinrichs
5 Ways To Stand In Solidarity With Women In America From The UK
By Sophie McEvoy
How To Fight For Reproductive Rights, Based On How Much Time You Have
By Courtney Young
Get Even More From Bustle — Sign Up For The Newsletter