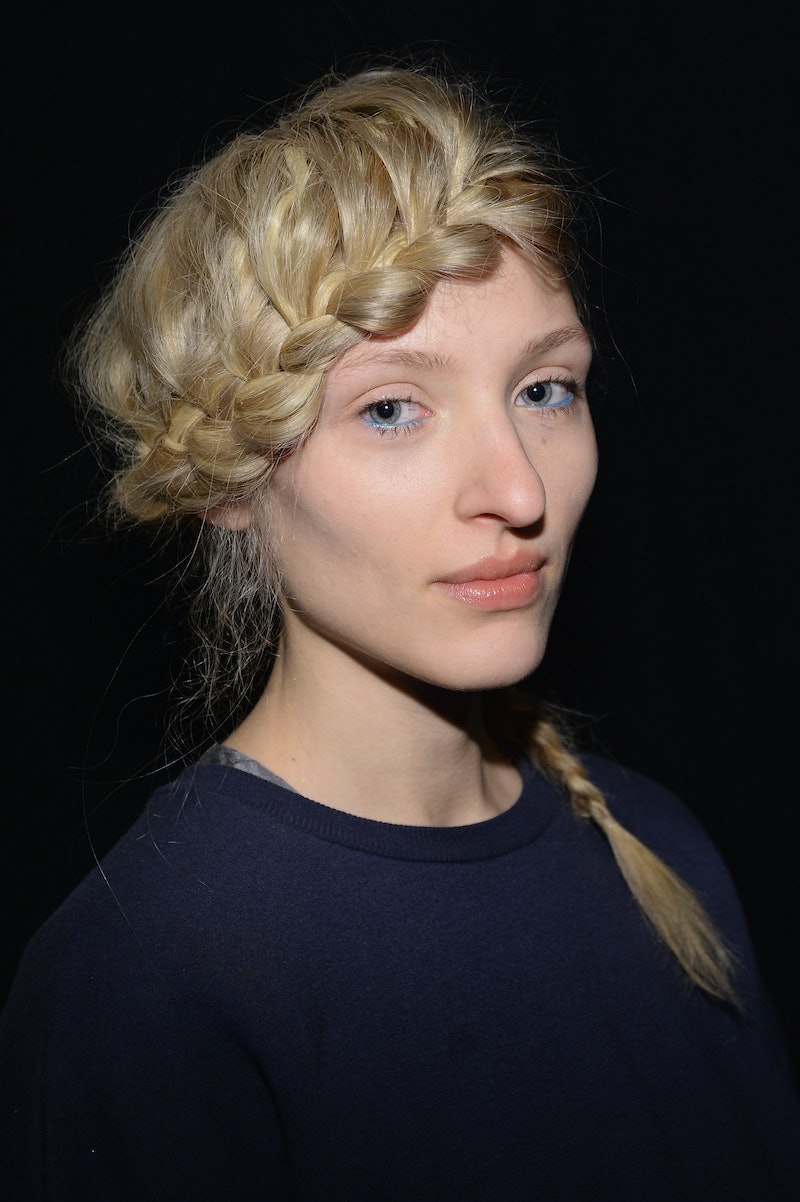 Whoa there, honey. Did I just catch you applying eyeshadow to your eyelid? Smudging your upper lash line with black eyeliner? No offense, but that's so 2013. According to three edgy looks at New York Fashion Week, the new frontier for eye makeup is the waterline and below.

Creatures of the Wind

The models at Creatures of the Wind (above) sported bare lids, minimal mascara, and a line of striking blue eyeliner painted precisely along their waterline. The effect wasn't intended to match the eye; rather, it was as though the models had been crying beautiful, sea-blue tears that were just about to brim over onto their cheeks.

Get it yourself: You'll need a powerfully pigmented liner that won't blink away; the Creatures of the Wind models wore NARS Larger Than Life Eyeliner in Khao San Road. But who says you have to go blue? Any color is fair game, though be warned that pinks or reds will give you that whole haute infected vibe.

The eyeliner at Nicholas K was the complete opposite of what we've come to expect from a cat-eye — these models got an angsty smudge of black along their waterlines and below the lash line, which extended upward into a light flick, and nothing dark up top. The look was moody, topsy-turvy, and paired perfectly with nude lips and sharp cheekbones.

Get it yourself: Thoroughly color in your waterline with your favorite black eyeliner. Then, light a match and hold the eyeliner over the flame, just for a second. After you make sure the liner has cooled, smudge it along your lash line and below, extending outward into a reverse cat-eye.

At the VFiles Made Fashion Show, Parisian designer ASSK smudged bright purple eyeliner beneath all the models' eyes, even the dudes. (Check out the ASSK girls' eyeshadow here.) The waterline was left untouched, and the shadow was dabbed over the undereye area. It was a little bit black eye, a little bit I've-been-crying, a little bit football-eye-black, and a whole lot of finally-a-new-way-to-wear-eyeshadow-it's-only-been-hundreds-of-years.

Get it yourself: All colors are game, but if you want to look vaguely like you've been in a fight, stick to bruise colors: purple, blue, green, gray. Use a cream or gel shadow (here's a bright purple one: Maybelline 24HR Cream Gel Eyeshadow) and dab it on gently — as pictured above — with your middle or ring finger. Let the color fade as it gets further from the eye, but otherwise, the more imperfect the better.

More like this
20 Beauty Gifts Under $25 That Make Perfect Stocking Stuffers
By Jordan Murray and Audrey Noble
The 117 Best Black Friday Beauty Deals Of 2022 To Shop
By Audrey Noble
23 Luxurious Beauty Gift Sets That Are Totally Worth The Splurge
By Olivia Rose Ferreiro
10 Makeup, Hair, & Skin Care Gifts That Beauty Lovers Will Drool Over
By Erin Stovall
Get Even More From Bustle — Sign Up For The Newsletter