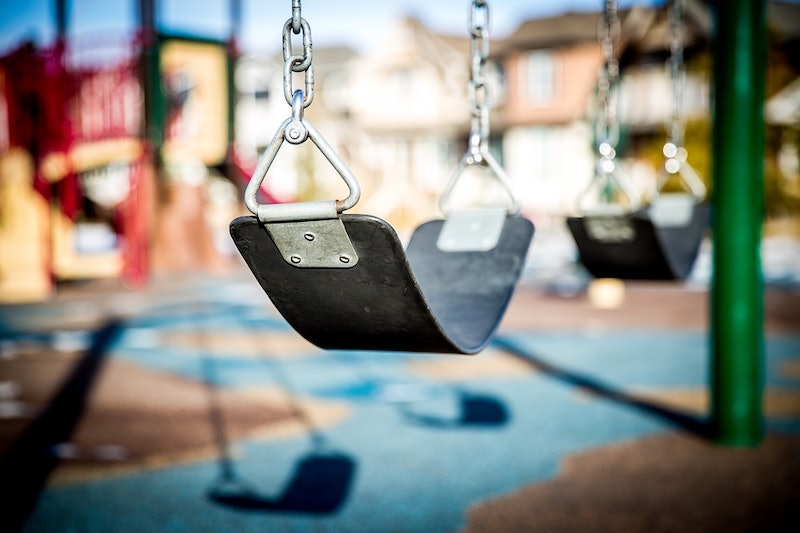 I am who I am today because of the lean, mean streets of recess in the '90s. You think you can mess with me? I've seen things you can't even imagine. I've braved the perils of recess yards entirely coated in lava. I dug a hole halfway to China with my bare seven-year-old hands. One time, when a recess teacher told me to come inside because it was raining, I didn't. For nine whole seconds. Yeah, that's right, punk. You better step off.

As a now Grown Adult Person (TM), I can't really speak to what recess looks like in 2016. I imagine seconds graders are Yik Yaking on the jungle gym, wearing virtual reality goggles on the swings, and inventing their own tire swing apps to play under their desks during spelling tests. I mean yeah, they're all going to be bajillionaires, good for them. But do you know who those bajillionaires will low key fear and respect for the duration of their technologically brilliant lives? ME, and all the other '90s babies who will forever rule this earth because of the bonafide badassery of what went down during our recess hours. Here are all the ways recess in the '90s made you a badass 4 lyfe.

You Are A Cutthroat, Savage Deal Maker

I dare you to try and trip up any member of my generation in a boardroom. I once shenaniganned a fifth grader out of a Clefairy for a Mewtwo. A Mewtwo from a damn starter pack. So yeah — think twice before trying to negotiate with the likes of us.

You Aren't Afraid To Take Risks

Listen — you don't play Red Rover. You slay Red Rover. There was no room for a second's hesitation, to give it anything less than everything you had. That same mindset led to two things: at least four broken arms in your class, and a persevering determination to commit to all your risks in life, personal and professional. We're practically daring the universe to send this Red Rover right over every damn day.

You Know What You Want, And You're Not Afraid To Get It

We all played M.A.S.H. at least 15 times a recess to get the pink convertible bug and four story mansion with our third grade crush and seven kids. And yeah, all these years later you'd settle for a M.A.S.H. of a rent-controlled apartment, an affordable sedan, and someone who will marathon 30 Rock reruns with you, but although the circumstances have changed, your determination to get them has not. FATES BE DAMNED.

Your Hunger To Rise Through The Ranks Is Unmatched

That first year after leaving college was just the grown up version of Four Square, for you realized that anyone who eventually becomes President, Vice President, or Secretary inevitably has to start out as Trash. (Too soon, post-grads?)

You Are Never Intimidated By Rejection

When you live in an economy where you'll hear 19 "nos" before that "yes" on Attempt #20, suddenly all the times you got picked last for kickball are less adolescent angst and all prepping you to charge full speed ahead during the misadventures of twentysomething (un)employment. I would like to personally thank every third grade jock who ignored my overly earnest, uncoordinated self at recess for making me the bulletproof BAMF I am today.

You Will Be Among The Sole Survivors Of The Inevitable Apocalypse

You've been preparing for a potential Trump presidency since 1997, when some punk in your class first yelled "THE GROUND IS LAVA!!!" and your world view was never the same. Yes, you may still see playground wood chips and visibly shudder well into adulthood. But you also know thanks to Lava that there are no circumstances too dire, to situations too impossible, no problems that can't be solved using teamwork, tenacity, and precariously shimmying your butt backwards up a plastic slide.