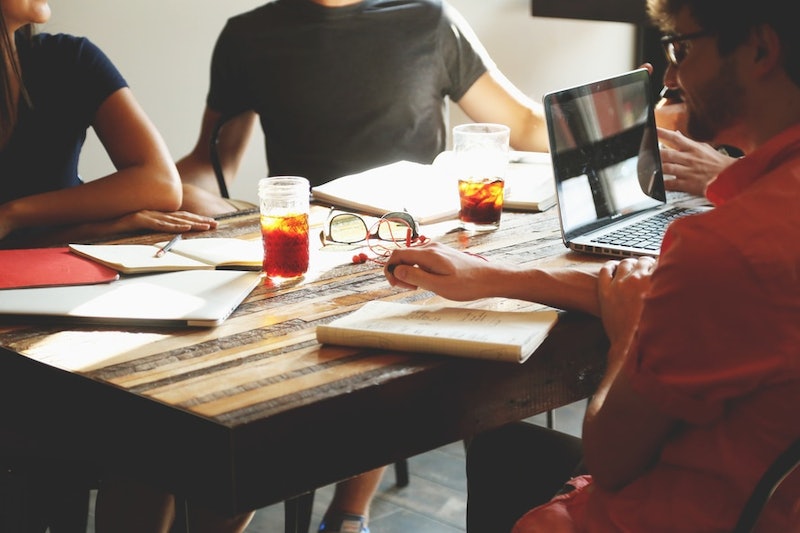 We spend a heck of a lot of time on the job, so figuring out how to make friends at work is kind of imperative for a happy life. Sure, some people are OK with lone-wolfing it at the office. But the rest of us don't want to sit alone and forlorn in our cubes all day.

Because, when you think about it, that's simply not a fun way to live — especially since we spend an incredible one third of our lives at work. That's a lot of time that could be spent giggling around the water cooler, chatting near the computers, and laughing it up at office parties.

Work BFFs just make the day more fun. In fact, a 2014 survey showed that the more friends an employee has at work, the happier and more productive they are, noted Lisa Evans on FastCompany.com. According to the survey, 71 percent of employees with friends at work reported loving their companies, compared to only 24 percent of employees who didn't have friends at work. And having friends makes it less likely that you'll leave your job, since you already feel all welcome and happy right where you are.

Doesn't that sound nice? (I think it does.) So whether you're new to a company and looking to make some pals, or you just want to be a part of that 71 percent, then here are some ways to strike up friendships with your coworkers.

1. Actually Say "Hello" To Them

Don't get into the habit of trudging to your desk, plopping down, and not speaking to anyone for the entirety of the day. This may be tempting — especially if you're new to a job and feeling shy —but resist the urge. Being closed off won't give anyone the chance to get to know you, and it will limit your chances of making new friends.

Instead, start greeting people, and trying a little harder to be friendly. As John Boitnott noted on Entrepreneur.com, "This is an easy one, but much of the time people forget (or are afraid) to do it. Often, if you reach out to someone that's all the effort it'll really take to open a line of communication and begin a friendship. Just start by saying 'hi' or 'goodbye' and you'll often find a coworker is happy to do the same to you the next time." Then, let the relationship build from there.

2. Ask For Help When You Need It

Workplaces can be competitive, and sometimes admitting you don't know how to do something feels scary. But there's actually something entirely refreshing about a person who can be honest and admit they are lost, confused, or stuck.

So relax, and come clean if you need help. According to Boitnott, "If you show these weaknesses instead of trying to hide them, people will usually respect you more for asking for their help. It'll open the lines of communication and show a different side of yourself." Plus, it's been shown that allowing someone to help you makes them like you more. Who knew?

Whether you're new to a job or not, it can be easy to find yourself in a lunch clique or water cooler gang. Before you know it, you and the same gaggle of coworkers find yourselves meeting up without even thinking about.

And that's wonderful. But if you're in the market for some new work friends, then you're going to want to switch things up occasionally. As Anna Helhoski noted on Time.com, "An easy way to branch out beyond your immediate circle of workplace friends is to switch up whom you eat lunch with or hang out with at happy hour. It doesn’t mean you’re any less tight with the people you’re close with; it just means you won’t close yourself off to other opportunities."

4. Be Someone You'd Want To Hang With

Work isn't always the greatest, so of course you're going to occasionally be cranky, or whiney, or upset, and that's OK. Just try not to make it a habit, as your coworkers may start to steer clear or your desk for fear of having to deal with the drama.

To make sure you aren't the whiney one in the office, take pause during the day and ask yourself, "Would I want to hang out with me right now?” If the answer is no, chances are your coworkers are feeling the same way, said Lynze Wardle Lenio on TheMuse.com. So check yourself, and make sure you're giving off positive vibes.

I know, when the work day is done the last thing you want to do is continue the festivities at a local bar or coffee shop. I mean, isn't it high time you went home and put on some sweatpants?

I mean, if you want to go home and put on sweatpants, then by all means do so. But if you're trying to cook up some new friendships, it's going to take a little bit of afterwork effort. According to Boitnott, "It's not uncommon for groups of employees to gather at the end of the week at a nearby coffee shop or restaurant ... Make sure to attend at least some of these get-togethers. It may be just like going to work, except no one will be as serious and there should be very little actual work. There might also be some alcohol involved and that can help make getting to know coworkers easier." Sounds worth it to me.

6. Don't Get Caught Up In Gossip

Ah gossip — it's an easy way to stir up conversation. Talk smack about her, point out what he did wrong, and you got yourself a convo. Easy peasy.

Yes, this can seem like a good way to get in with a group, but it's not exactly the stuff of lasting (or healthy) friendships, noted Evans. Gossip can also come back to bite you if someone overhears, or if the gossip turns back on you. So find more positive ways to strike up friendships.

Be the nice person everyone wants to know, stay open to chatting throughout the day, and occasionally hit up those office happy hours. Small things like these make building new friendships at work that much easier.