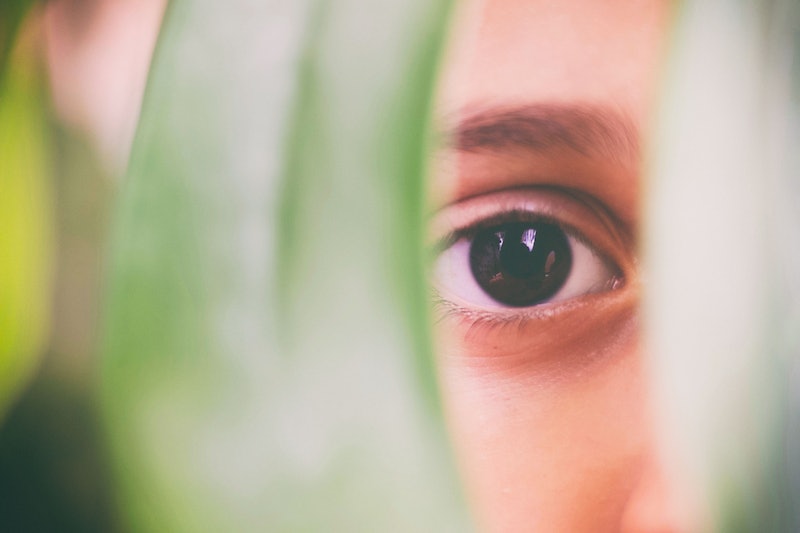 There are lots of reasons some people like to wear contacts instead of glasses, but like everything else in life, they don't come without risks. We all know that things can go badly if you don't wear and care for your contacts properly, but there are some really weird things that wearing contacts does to your eyes — even when you do everything right. In fact, one new study even suggests the surfaces of your eyes become more like your skin in some ways when you wear contacts. Like I said, weird.

From diamond-encrusted contacts to contacts that give you a much more literal cat eye, contact lenses come in all varieties. But whether you're wearing specialty lenses or your garden variety clear ones, it's important to clean them properly and to change them regularly, lest you risk damaging your eyes. Unfortunately, the CDC estimates that the vast majority of contact lens wearers are doing it wrong, which is a little troubling, given that contacts are playgrounds for bacteria if not used properly.

What's even more troubling, though, is the fact that wearing contacts can have big effects on your eyes even if you are one of those rare people who does everything right. And while these things don't seem to cause major problems in most cases, they're still kind of freaky. Here are three ways wearing contacts affects your eyes.

Researchers aren't sure why this is. They theorize that it's possible touching your contacts with your finger causes more transfer of skin bacteria, but presumably skin bacteria could also get onto your eyes from, you know, the skin around your eyes. The much stranger hypothesis is that when you wear contacts, “the lenses exert selective pressures on the eye bacterial community in favor of skin bacteria,” as one of the co-authors explained in a press statement. Basically, wearing contacts makes your eyes enough like your skin, at least from the perspective of bacteria, that bacteria want in.

Because putting a solid layer over your eyes means less oxygen is getting to the surface of your eye, the oxygen deprivation can cause the surface of your eyes to become less sensitive, essentially anesthetizing your cornea (the clear layer over the top of the eye). This isn't actually that big of a deal... except that it means you're less likely to notice the types of abrasions that contacts can create in the cornea. Which can be bad, if it means those abrasions go untreated.

In a typical eye — that is, one that's never worn contacts — the cornea is mostly free of blood vessels. However, because wearing contacts means the cornea isn't getting as much oxygen from the air, blood vessels from the surrounding tissue can start to grow into the cornea in an effort to provide more oxygen. These vessels can, in extreme cases, even interfere with your vision. And they're permanent — even if you stop wearing contacts, they stay.

In short, wearing contacts can do some weird an unexpected things to your eyes — which is why it's doubly important to not put yourself at risk for any extra, more serious complications. Oh, the price we pay for being able to see clearly.

More like this
How Ovulation Affects Your Sense Of Smell, Libido, & More
By JR Thorpe and Lexi Inks
An Expert Weighs In On The Viral Raw Carrot Salad Trend
By Alexis Morillo
6 Asian Beauty Rituals That Will Soothe Your Skin, Scalp & Mind
By Jennifer Li
Here’s What Health Means To People In 2023
By Isabella Biedenharn
Get Even More From Bustle — Sign Up For The Newsletter
From hair trends to relationship advice, our daily newsletter has everything you need to sound like a person who’s on TikTok, even if you aren’t.