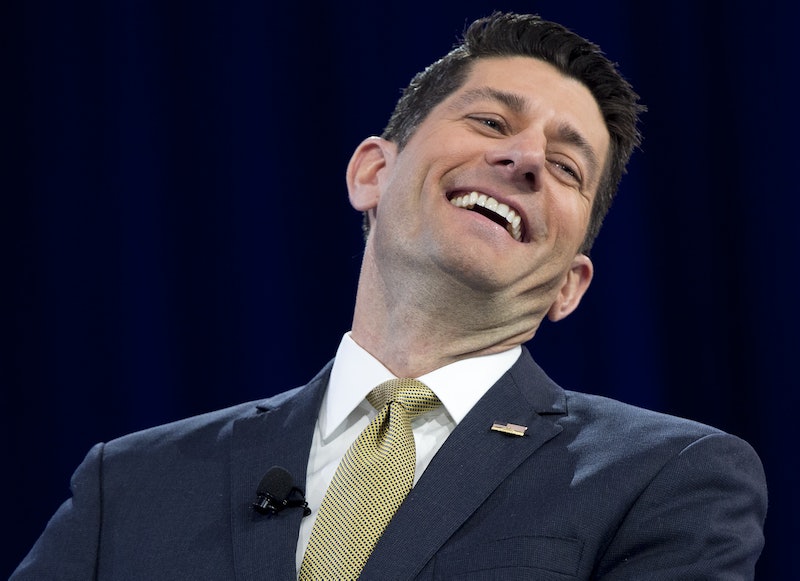 Is this the way the Republican nomination process will end? Not with a bang (nor a contested election) but with a whimper from Paul Ryan? In recent weeks, it seems like Ryan has slammed Donald Trump full-court-press-style — from criticizing the various ways in which Trump is inconsistent with the Republican Party's policies and philosophies to not-naming-names but heavily implying that the spirit of the real estate mogul's campaign was toxic and "disheartening" for American politics in a speech on Wednesday. However, there's one small problem in thinking the speaker of the house is in anti-Trump-or-bust mode: Ryan still insists that he will support the candidate who wins the nomination — yes, even if it's Trump.

Ryan's promise to "work with" whichever candidate GOP voters choose has been considered a last-ditch effort to remain neutral in the face of what some high-profile party members consider the beginning of the Republicans' end. While many saw Ryan's speech on Wednesday as revealing glimpses of a politician who is indeed deeply saddened by the pathetic dealings of his party's candidates (or one in particular), you can also see that Ryan and other Republicans are laying some important groundwork to try to bring the party together should everything actually come up Trump.

It seems that Ryan's mission as of late has been to highlight the ideals of the Republican party — or, more specifically, how they differ from Trump's past and present platforms — whether he's challenging Trump's reluctance to turn down white supremacist endorsements or Trump's vastly different opinions on reforming Medicare and social security from the Republican Party's. Ryan has been adamant that even if Trump becomes the party's nominee, he is not going to change his views. "I’m going to speak my mind. I’m going to defend conservatism as I understand it," he told CNBC's John Harwood in a recent interview. "I’m going to defend our ideas as the Republican Party. But we’re going to have to work with whoever our nominee is."

In his address on Wednesday, Ryan looked to sooth the confusion and frustration of the chaotic race — even towing the line of hopefulness — while dealing with a Republican Party whose morale was, perhaps, best summarized by a tweet written by a former aide to former Texas Gov. Rick Perry after the now-infamous Fox debate on March 3rd (you remember, the one with the yoga and the penises and unsettling fourth-wall-breaking?): "My party is committing suicide on national television."

Most importantly, as many headlines have noted, Ryan is refraining from actually naming Trump as the harbinger of the Republican apocalypse. That not-naming is critical. It's how Paul remains a critical but neutral presence. Ryan's choice to grant Voldemort-status to Trump works in a couple of ways. For one, in the future, it protects Ryan a bit by allowing him to potentially claim that he wasn't talking specifically about Trump, lest he later be accused of causing a schism with his party's (probable) presidential nomination. At the same time, through keeping his hands clean of the juvenile behaviors that have defined this race, Ryan's ultimately placed in a better position to frame himself as the measured foil to Trump-like candidates — and further highlight the ideological and policy differences that are crucial to winning over the party in the long run.

Not explicitly naming Trump and striving to "elevate" the debate above the mud pit of the primaries also seems to hint at a Ryan motive that goes beyond the obvious: Maybe he actually is not in the market to stop Trump from setting the party ablaze, but instead to be there, poised and ready to lead whatever rises out of the ashes.

While Ryan is unafraid to lay it on thick — relying heavily on his misty-eyed, nostalgic tone as he waxes poetic about what his party (and American politics) could and should be — the decision to remain neutral and above the fray is what keeps me from seeing his latest speech as a simple #NotTrump, #NeverTrump attack. If Ryan's not preparing to step in to the race (as he has outright stated), there's reason to speculate that he's instead prepared to deal with the very likely result of a Trump nomination.