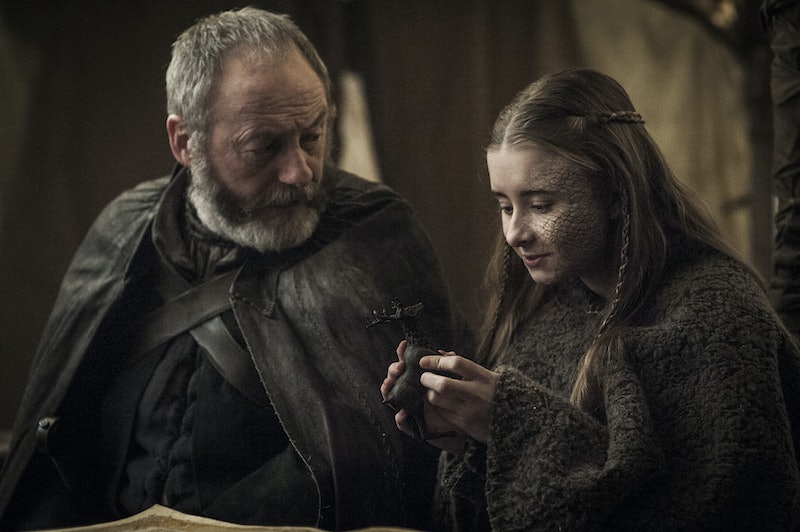 Game of Thrones is known for its epic moments, but sometimes it's the quiet and small scenes that pack the biggest punch. You don't need dragons or even dialogue sometimes to generate must see TV. Actor Liam Cunningham describes as the one Davos Seaworth scene to revisit in Game of Thrones Season 5, which is now available on blu-ray and DVD for all of your marathon and special feature needs. Since Davos was featured in the Game of Thrones Season 6 trailer pretty prominently, he's definitely one to keep an eye on when you re-watch.

In an interview with Bustle, Cunningham chose the moment that Davos discovers that Shireen has been sacrificed. It is one of the last scenes in the episode, sandwiched between Cersei's walk and Jon Snow's stabbing. (I won't say death, you can't make me.) Since Davos was at the Wall when it happened, many of the characters and the audience knew that the girl who befriended him and taught him to read had died before he did. It wasn't until Melisandre, who for the first time on this show is experiencing regret, abandons Stannis at Winterfell and returns to the Wall, that he discovers what happened to Shireen.

"Davos didn't know until right at the end of [Season] 5 when she comes through the gate," Cunningham says. It's really one of the best scenes for Davos and the Red Lady.

When Melisandre walks in and she has a face on her that Davos has never seen before — or the audience. This broken, essentially broken moment. There's no dialogue needed — she just makes eye contact then walks away. That's beautiful. It's so cinematic, that moment. That nothing needed to be said. And it's heartbreaking. It's appalling. His world, his entire world is gone. And Davos doesn't deserve that. He's tried to do good. He's been a decent person. Tried to do the right thing. But in Game of Thrones, bad things happen to good people.

It's also important to note that in this scene, both Melisandre and Davos have put their faith in Lord Commander Jon Snow as a leader. Davos was just trying to convince him to rally the Wildlings to Stannis' cause, and I presume that Melisandre left Stannis to serve a new King. That's the one thing both characters have in common. Both align themselves with strong leaders, but neither see themselves as leaders themselves.

"He's a good at lateral thinking," Cunnngham says. "He does the right thing. He has a magnificent conscience. He's the kind of friend that all of us want to have at the end of the phone, that you go I don't know what to do about this. I'm gonna ring my friend Davos. And within two minutes he'll turn around and go 'well, what are the options' ... and suddenly there would be clarity."

Cunningham doesn't feel that Davos has the ambition or even the desire to lead. Which, given how things tend to go for those who seek power in Westeros, makes him one of the best dudes in the Game of Thrones universe. Hopefully this quality will continue to benefit him when the show returns for Season 6.

More like this
Emilia Clarke Shares More Details About The New 'Game Of Thrones' Series
By Maxine Harrison
Twitter’s Reaction To HBO’s ‘Game Of Thrones’ Jon Snow Spinoff Idea Is Chaotic
By Stephanie Topacio Long
Does Umbrella Academy Season 3 Have A Post-Credits Scene? The Answer Will Surprise Fans
By Brad Witter
Wait, What’s Going On With Ben In That Umbrella Academy Season 3 Post-Credits Scene?
By Gretchen Smail
Get Even More From Bustle — Sign Up For The Newsletter