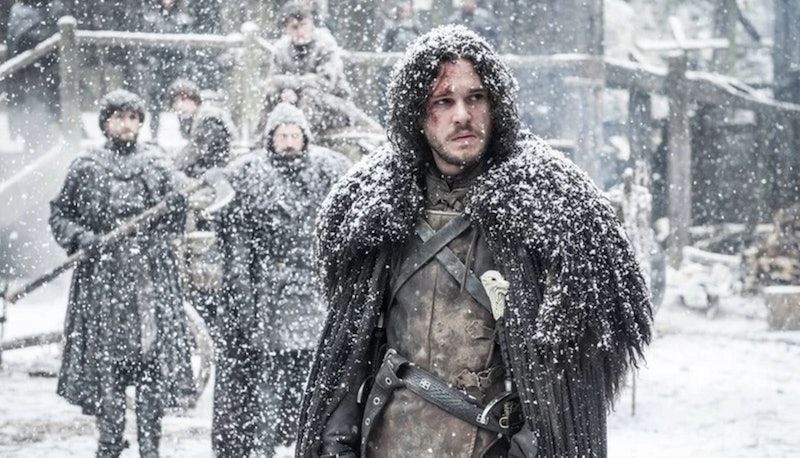 On Tuesday, HBO rang its handbell, invited Game of Thrones fans to gather round, and marched a brand new Season 6 trailer down the cobblestone streets for all to see. And boy howdy, there is a lot going on in this preview. There are White Walkers! There are dragons! There are horses! There is fire! There are bows! There are arrows! There is Cersei refusing to back down! There’s a cover of Chris Isaak’s classic jam “Wicked Game”! Oh, and there may or may not be a cameo by the 998th Lord Commander of the Night’s Watch! Yep, Jon Snow is back. At the very end of the GoT Season 6 trailer, we see Ser Davos Seaworth and some other humans standing over Jon Snow’s (presumably dead) body. The Onion Knight unsheathes Longclaw (cue the gasps), apologizes for whatever it he is about to do, and then points the weapon at Jon Snow’s corpse and Ghost the direwolf (cue a second round of gasps).

The brief scene is all but pitch black, so it's not exactly easy to make out what is happening. Honestly, I wasn't 100% certain Ghost was in the scene until I took a look at some lightened screen caps:

Excuse me, Davos? Hi, Davos. Quick question: What exactly are you doing? Followup question: You wouldn't dare hurt sweet Ghost, would you?

Is this all part of Jon Snow's resurrection? Or is Davos up to something else? Is Ghost going to be OK?!?!?!?! What in the name of Eddard Stark is going on here? Don't mind me as I nosh on some Twitter theories until GoT Season 6 premieres on April 24:

Maybe No One Is Safe

Don't mess with Ghost, Davos. DON'T DO IT.

Or Maybe Davos Doesn’t Kill Ghost At All

& Maybe Everything Is Fine

More like this
'Games of Thrones' Fans May Recognise This 'Conversations With Friends' Location
By El Hunt
The 'P-Valley' Season 2 Trailer Teases A Major Shakeup At The Pynk
By Johnny Brayson
Grey's Anatomy Fans Refuse To Accept Kaimelia's Shocking Relationship Update
By Brad Witter
Oops! The 'Stranger Things' Monopoly Game Has Spoilers For Season 4
By Alyssa Lapid
Get Even More From Bustle — Sign Up For The Newsletter