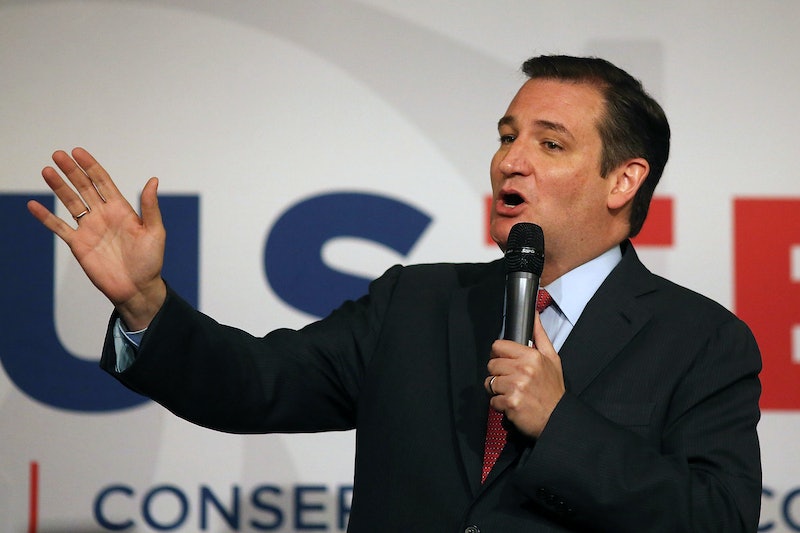 Texas Sen. Ted Cruz gave Twitter a laugh on Wednesday when he copied a line from The American President in response to GOP frontrunner Donald Trump’s recent threats against his wife, Heidi Cruz. “I gotta tell you that number one, Heidi, my wife, she is the daughter of missionaries in Africa, she is my best friend in the world,” Cruz told CNN. “And if Donald wants to get in a character fight, he’s better off sticking with me, because Heidi is way out of his league.”

Always quick to pounce on any candidate's mystifying choice of words (especially ones that sound a little too familiar or are falsely attributed to Founding Fathers), Twitter recognized the line from a speech given by fictional Aaron Sorkin president Andrew Shepherd (played by Michael Douglas). Perhaps Cruz hoped through some strange reading of the transitive property that if he borrowed a line from The American President, he might in fact become such a president. Maybe that's why Cruz relied on Shepherd's line, a perfect balance of fierce and romantic, to a political opponent. “You want a character debate, Bob, you better stick with me, because Sydney Ellen Wade [Shepherd's love interest] is way out of your league.”

If you haven't seen the movie yet, do yourself a favor and watch it. The movie showcases presidential politics that are actually far saner and more intelligent than the current election (if only Hollywood could have added rationality to the 2016 race — and yes, I can't believe I just wrote that).

Here’s the important bits side by side, if you’re short on time:

As great as that line is, it seems a bit too kindly and self-deprecating for what we've come to expect from Cruz. So here are some alternatives that seem a bit more appropriate for him and this election. The novelist Don DeLillo said that "lists are a form of cultural hysteria," to which I say that lists are sometimes a good response to a hysterical (the serious meaning, not the funny meaning) moment in our culture.

If Cruz wants to stay on the same train of thought to defend his wife against Trump's Twitter threat to "spill the beans" on Heidi, he may want to consider this line from Good Will Hunting:

(Though outside of this GIF, there's not much joy in comparing Cruz to Robin Williams.)

Perhaps Cruz wants to challenge Trump’s occasional claims at humility. For example, during the March 3 Fox debate, Trump boasted, "I built a company that's worth more than $10 billion," then added, "And I say it not in a bragging way" (sure, Donald). If Cruz wants to go after Trump's weak attempts at false modesty and his hair/spray tan all at once, then he may want to consider this line from The Philadelphia Story:

Maybe Cruz wants to defend his campaign’s various missteps, such as the Ben Carson mailer debacle. For those of you who don't remember or have willfully blocked it, Cruz's campaign suggested to voters at the Iowa caucus that Carson was about to drop out and that they should consider hopping on over to the Cruz camp. Carson later accepted Cruz’s apology, but only after a lot of talk about the Texas senator’s “dirty tricks." To deflect some heat, Cruz may want to borrow the line below from Super Troopers — though, for the record, I do not really consider such shenanigans "cheeky" or "clever."

If Cruz wants to go after Trump based on the celebrity billionaire’s baffling price estimations for his Mexican border wall, he might consider this line from Happy Gilmore:

(By the way, if you haven't watched the John Oliver's Last Week Tonight segment on the estimated cost of Trump's infamous wall, please go do so. It explains the various reasons Trump's $10(ish)-billion price tag is lunacy.)

If Cruz wants to question Trump’s use of “China” as a catch-all response to foreign policy questions:

The only upside of this default Trump response is that it once led to a beautiful drop-the-mic moment. In November, in the middle of a debate, Rand Paul (who was still running) reminded moderator Gerard Baker that China wasn’t even part of the deal Trump was talking about.