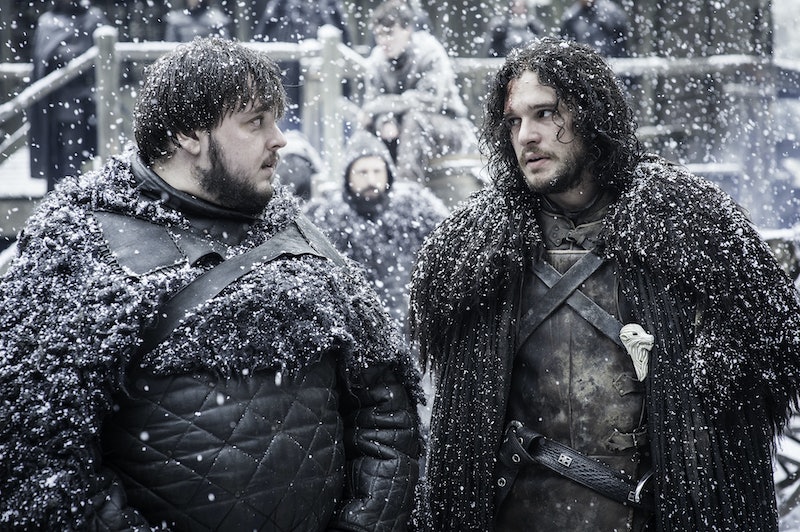 As long as Game of Thrones is on the air, we'll be discussing and debating whether the story and the characters are progressive or problematic in terms of feminism. Let's take a moment to focus on a positive example, because I really think that Jon Snow is a budding feminist on Game of Thrones. Should I use the word "budding" about a character who is presumed dead? Probably not, but I'm gonna.

There are so many female characters who embody feminist journeys in different ways on this show, from Daenerys to Sansa and Margaery to Shae, Cersei, Yara Greyjoy and Brienne of Tarth. But I think, after five seasons of the HBO series, Jon Snow would definitely be joining the #HeForShe campaign in Westeros. One of his greatest strengths is his power of observation and the way he absorbs various leadership styles and philosophies. Even as a member of the Night's Watch, he has been able to encounter some feminist role models — even Melisandre, but that didn't work out so well for him.

This may be a fantasy universe, but it's clear that sexism is just as institutional as in our world. Nobody, especially a boy, is born feminist in this world. It's a learning curve just like anything else. Jon Snow has had ups and downs like the best of us, but I think these moments prove that he had what it takes to be a feminist all along.

Jon saw a fellow underdog in his littlest sister (or whatever their relationship really is) — who wasn't fond of the traditional gender roles in Winterfell. Instead of judging her, he gave her a sword with a cleverly ironic name, and set her on a kickass path.

2. He Believes In Birth Control

Jon told Samwell that he once had the opportunity to have sex with Ros (RIP, never forget) and couldn't do it because he was too worried about bringing another bastard like himself into the world. Since there isn't any kind of family planning in Westeros, I think this is somewhat of a progressive and feminist line of thinking. It's considerate to say the least.

3. He Learned From The Best

In his scenes with Ygritte, Jon expressed some backwards beliefs about the differences between men and women, and the wildling set him straight about everything from what women are capable of to the dangers of generalizing and even periods.

4. He's Willing To Perform Oral Sex With No Prompting/Instruction

Even though she didn't like him, it seemed as if Jon always respected Ned's wife. Having such a strong female figure in his life from an early age is likely informing his current feminism.

6. He Questioned Sam's Intentions For Gilly

This is a tricky one. Sure, Sam may be the feminist MVP with the line "I can't steal her. She's a person, not a goat." However, Jon is making a good feminist point. He's worried that Sam wants to take Gilly with them for selfish reasons. That's why he wants to know more about what Crastor does with his sons.

7. He's Ultimately Going To Be #TeamDaenerys

That's clearly where this is all heading, right? After he wakes up from being mostly dead and discovers that he's a Secret Targaryen and Dany's cousin, he'll likely rule either alongside her as equals or under her. Jon Snow is slowly becoming a feminist on Game of Thrones under our very eyes which makes me even more excited for what's coming next — because there's definitely a "next" for him, shut up.

More like this
'GoT' Star Emilia Clarke Says She "Just Can't" Watch 'House Of The Dragon'
By Brad Witter
Netflix Shut Down 'Bridgerton' S3 Rumours About A “Very Dark” Storyline
By Bustle
Bill & Frank’s 'The Last Of Us' Episode Has Twitter Emotionally Wrecked
By Alyssa Lapid
'The Last Of Us' Has Officially Been Renewed For Season 2
By Darshita Goyal
Get Even More From Bustle — Sign Up For The Newsletter
From hair trends to relationship advice, our daily newsletter has everything you need to sound like a person who’s on TikTok, even if you aren’t.