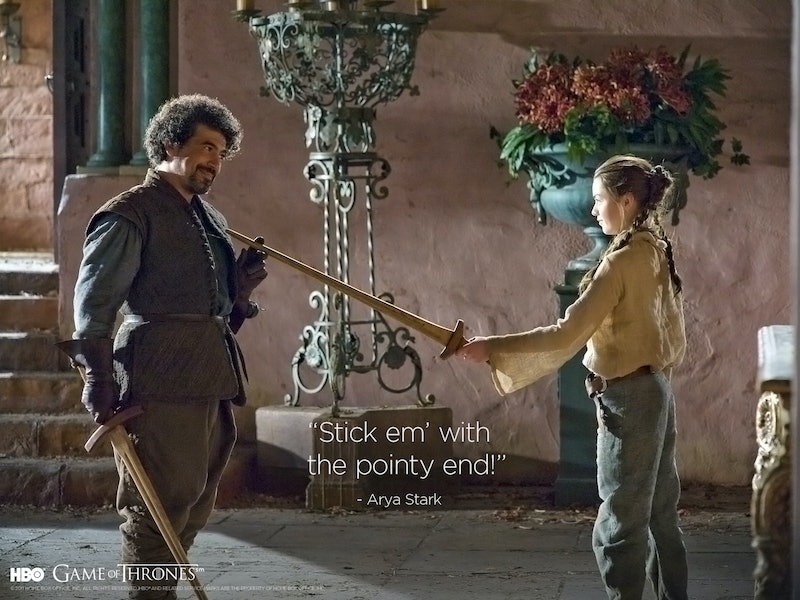 Who here is stupidly excited that Game of Thrones returns to HBO this Sunday? This gal! The fourth season is set to kick off at 9pm, and I seriously can’t wait to see Arya, Daenerys, Tyrion, and the rest of the cast brought to life on the small screen once again.

There are plenty of reasons to love the show, but one of my hands down favorites is how amazing all of its women are. From the major players to the ones we’ve only just started to get to know, these ladies — and the men who support them — all know how to kick some major arse.

Warning: I’m assuming that if you’re reading this, you’ve seen all three of the previous seasons; if you haven’t, a) please go fix that immediately, and b) beware of spoilers.

Here are the women of Game of Thrones' most badass moments.

1. Arya Stark Doesn't Want to Be a Lady — And Ned Is A-OK With That

Way back in season one, Ned Stark discovers the existence of Arya's sword, Needle, during a touching heart-to-heart. When he tells her that ladies shouldn't play with swords, she retorts that she wasn't playing, and that she doesn't want to be a lady, anyhow. And bless Ned, he listens to his daughter and sets up what he calls her "dancing lessons" which in actuality, are fencing lessons with the Braavosi sword master, Syrio Forel. Arya has had a lot of fabulous moments since then, but her fencing lessons were the start of it all. She’s proven herself to be a formidable opponent over time — and one who’s not afraid of bucking the system.

2. Balon Greyjoy Reveals That Yara Will Lead the Charge — Not Theon

Yara (or Asha, if you prefer her book moniker) has one of the best introductions in the third season, playing Theon in such a way that dramatically underlines how much smarter, fiercer, and more capable she is than her little brother. In fact, she’s so awesome that their father, Balon (who, granted, is kind of a jerk, but what can you do) goes so far as to put Yara in charge of leading their attack on Westeros instead of Theon. Talk about breaking with tradition.

Ygritte and Jon Snow’s relationship is a wonderful reversal of the usual “boy meets girl, boy woos girl, boy wins girl, and they live happily ever after” (minus the “happily ever after”). Rather than waiting around to see if Jon notices her, Ygritte goes totally balls to the wall and pursues him instead. How hot is that very, VERY NSFW third season scene in the cavern where he breaks his Watch vows? Plus, she’s a powerful warrior to boot. What’s not to love?

4. Ros Leaves Winterfell to Make Something of Herself — And Succeeds Like Whoa

From her humble beginnings all the way up to her untimely end (sniff, sniff!), Ros was a pleasant surprise. She doesn’t exist in the books; I assume she was created to serve as an amalgam of the series’ many prostitutes — and although I’m not usually a fan of amalgamation characters, she took me by surprise.

Ambitious, smart, and a shrewd businesswoman, Ros left the only home she'd ever known in season one in order to carve out a place for herself in a world that’s not often kind to women. She even flourished as she did so, right up until Littlefinger did her in. Damn you, Littlefinger! Damn your eyes!

5. Margaery Tyrell's Declaration That She'll Be Queen If It's the Last Thing She Does

I’m going to go out on a limb here and say that Margaery is the best politician in the entire series. Sure, she’s as power hungry as the rest of them — but I get the sense from her dealings with the less fortunate and such that she’d actually be a better ruler than any of the other ones we’ve seen sit the Iron Throne so far. She knows how to play the game of thrones like a pro (if you win or you die, I’d say she’s definitely on the winning side — watch out, Cersei); and perhaps most impressively, she’s somehow twisted the impossible-to-manage Joffrey right around her little finger. She knows what she wants — and what’s more, she flat-out knows she’s going to get it. It's not a question of if. It's a question of when.

There’s no denying that Brienne is amazing; her very existence is proof that binaries don’t matter. But just as interesting — and just as important — is how Jaime’s opinion of her shifts over time. He goes from outright mockery, to grudging respect, all the way to something that even looks a little bit like love (romantic or otherwise — I’m not even really sure it matters what kind it is).

Like Arya's journey, it all starts with a moment: in this case, it's during their third season fight right before Roose Bolton captures them. If you can change a Lannister’s point view … well, you're clearly a badass.

Let’s face it: As she’s written in the books, Jeyne Westerling is a snoozefest. Her television show counterpart, however? LOVE her. Talisa Maegyr wins Robb’s heart not by “comforting him when he’s wounded” (euphemism alert!), but by showing him what she’s made of as a healer in the aftermath of a horrible, bloody battle. Much more interesting — and much more badass.

8. Daenerys Rises from the Ashes as the Mother of Dragons

Where do you even start with Daenerys? From Dothraki Khaleesi to Mother of Dragons and from revolutionary to queen, she’s come a long, long way from the unformed child she was at the start. Watching Dany come into her own has been astonishing; starting with the moment she rises from the ashes at the end of season one.