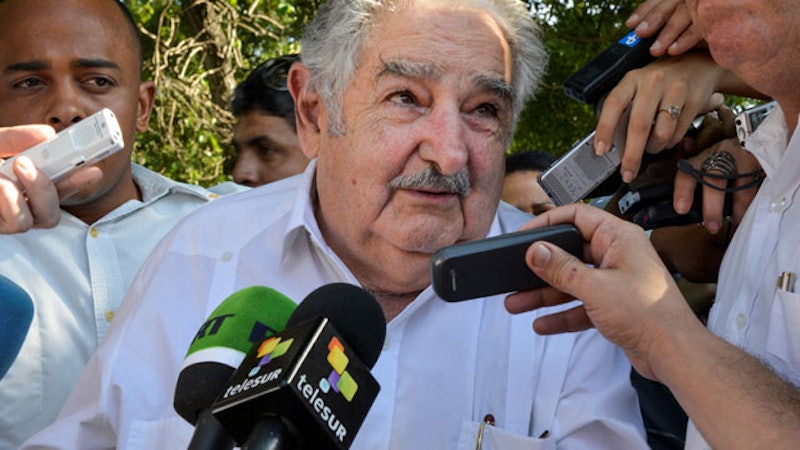 For the second year in a row, Uruguayan President Jose Mujica’s decision to legalize marijuana has netted him a Nobel Peace Prize nomination. Mujica’s name was submitted both by the Drugs Peace Institute, a Dutch NGO, as well as his own leftist political party, the Frente Amplio. He made it to the top ten finalists last year, but was ultimately beat out by the Organization for the Prohibition of Chemical Weapons for its role in disarming Syria’s weapons arsenal. So, assuming no other tyrants use chemical weapons on their citizens any time soon, Mujica should be a shoe-in to win the award this year, right?

“I’m very thankful to these people for honoring me,” Mujica said in Havana, where he was attending a summit of Latin American leaders last week, according to Argentine daily La Nación. “We are only proposing the right to try another path because the path of repression doesn’t work. We don’t know if we’ll succeed. We ask for support, scientific spirit and to understand that no addiction is a good thing. But our efforts go beyond marijuana — we're taking aim at the drug traffic."

With Mujica’s decision last December, Uruguay became the first country on Earth to fully legalize the sale and possession of marijuana. The policy goes fully into effect in April; until then, the only countries with semi-legalized marijuana at the federal level are the Netherlands and North Korea (yup). As Bustle reported, Mujica has faced some pushback for the decision:

A United Nations drug-watchdog group has declared that the small South American nation is violating international law with its new legislation. The fun-sounding International Narcotics Control Board monitors nations’ compliance with various international drug treaties, and, according to the agency, Uruguay’s intention to legalize of the sale, production, and consumption of weed violates those agreements.

The INCB’s president, Raymond Yans, said it was surprising that Uruguay “knowingly decided to break the universally agreed and internationally endorsed treaty.” The watchdog claims that legalization will introduce more young people to the drug, and the planned legislation would “contribute to the earlier onset of addiction.”

In signing the bill, Mujica pointed to Colorado and Washington, both of which legalized recreational marijuana in 2012, as having blazed the trail for his legalization. In Uruguay, the government will actually sell marijuana below the street value in an attempt to undercut the black market.