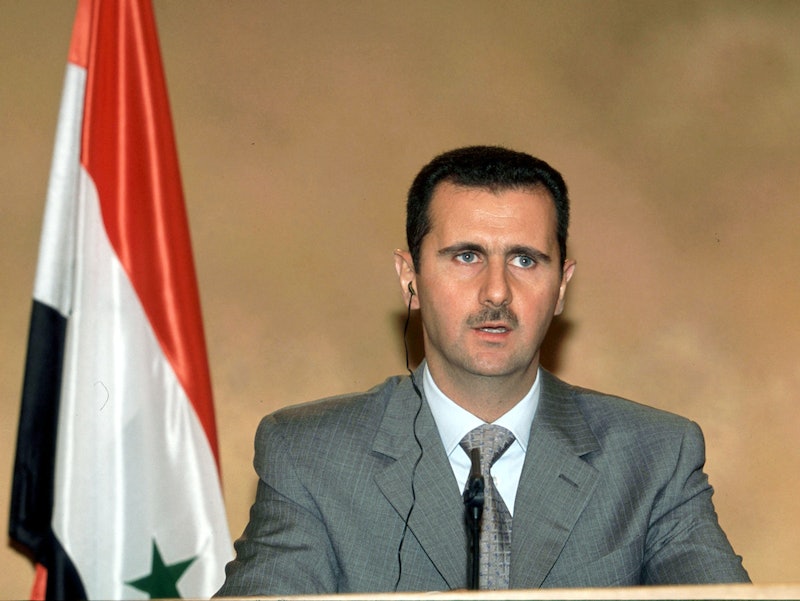 Chemical weapons inspectors in Syria said they'd met a deadline for destroying the country's ability to produce and deploy chemical weapons Thursday. The inspectors from the Organization for the Prohibition of Chemical Weapons said they visited and disarmed 21 or the 23 sites reported by President Bashar al-Assad's regime. Two of the sites were in zones of heavy conflict, but, the inspectors said, the relevant equipment from those sites had been moved to sites the inspectors were able to access.

"The joint mission is now satisfied that it has verified — and seen destroyed — all of Syria’s declared critical production and mixing/filling equipment," read a statement from the group. "Given the progress made,” it said, “no further inspection activities are currently planned." The inspectors disarmed the equipment by literally breaking off pieces, or clogging it with cement.

We reported earlier this week that the inspectors had missed a preliminary deadline for visiting all of Syria's chemical weapons sites by Oct. 27. That was part of an overall less-than-stellar start to the country's week, in which Assad fired Qadri Jamil, the deputy prime minister who handled most of the communications over peace talks, and the World Health Organization reported the first confirmed cases of polio in Syria in over a decade. The victims are all believed to have been born after the start of the civil war.

But now the inspectors' trip is back on schedule. The country's weapons destruction agreement is part of a deal to block a U.S. strike on the country. President Barack Obama considered a military strike on Syria after evidence surfaced of an Aug. 21 chemical weapons attack just outside Damascus. The attack, which U.S. leaders said was carried out by the Assad regime, violated international norms about the use of chemical weapons.

Now, the inspectors are on to next steps: by Nov. 15, Syria must provide a plan for getting rid of 1000 tons of already existing chemical weapons, which include mustard and sarin gas. Unfortunately for the inspectors, this is likely to prove more difficult — and dangerous — that simply pouring concrete into machinery to render it unusable. On the bright side, they have more than a month to do it: international estimates for how long destroying existing weapons should take puts the completion date in mid-2014.

More like this
What To Know About Martin Bashir After Watching 'The Crown'
By Bustle UK
Read Dan Levy's Heartbreaking Message After The Club Q Shooting
By Stephanie Topacio Long
Iran Has Issued A Death Sentence Over Mahsa Amini Protests
By Catharina Cheung, Darshita Goyal and Maxine Harrison
The Best Chemical-Free Shampoos & Conditioners
By Marissa DeSantis
Get Even More From Bustle — Sign Up For The Newsletter