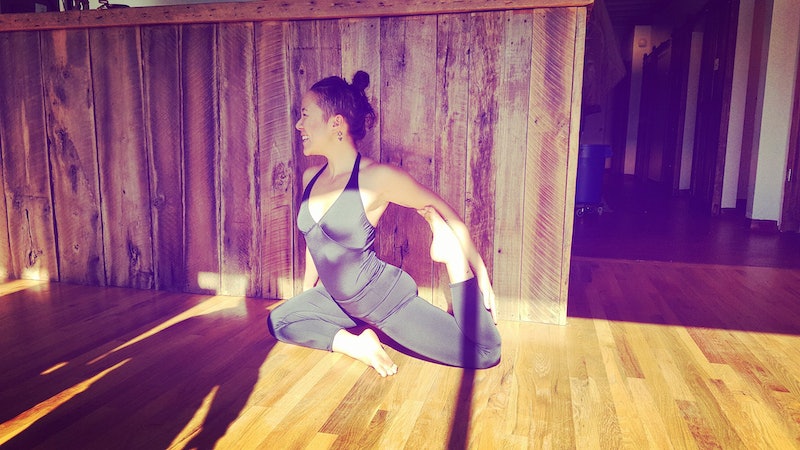 Because of its grand claims about sharpening the mind-body connection, there are a whole lot of researchers and scientists out there trying to figure out what exactly happens in your brain when you do yoga. The same curiosity doesn't really seem to exist for other group physical activities, such as Crossfit or bootcamp, which isn't a surprise, considering there isn't anybody telling you that those tricep dips will result in less stress, reduced anxiety, and improved sleep patterns.

Although many people have come forward to say that yoga does, in fact, provide you with positive side effects, especially when it comes to emotional health, the ancient Eastern practice has some catching up to do when it comes to scientific proof. But Sat Bir Singh Khalsa, Ph.D. and assistant professor at Harvard Medical School, is on it. Dr. Khalsa has spent more than a decade gathering research on yoga and its scientific effects on the mind. In his book, Your Brain On Yoga , he outlines what really happens in that head of yours after an hour of Vinyasa flow.

Dr. Khalsa isn't the only person who has devoted themselves to the cause, though. Countless other researchers have worked hard to uncover the real science behind the yoga brain. What they've found might surprise you. It might even creep you out — in a good way.

Here are six ways your brain changes when you do yoga.

1. You Brain Gets Flooded With Feel-Good Chemicals

You've heard before that your head gets slammed with dopamine and oxytocin when you have an orgasm, making you more creative and lively in the long run. Well, while you might not think it feels as good, similar things happen when you're in downward facing dog.

During yoga, your levels of gamma-amino butyric acid (GABA) spike up significantly. At Boston University, researcher Chris Streeter conducted a 12-week study of 34 individuals, half of which spent one hour three times a week walking, while the other did yoga for the same amount of time. At the end, they found that the level of GABA, a chemical associated with decreasing anxiety and improving moods, rose in the yogis by 27 percent. The walkers didn't see anywhere close to that result.

You get more dopamine and serotonin by doing yoga too, chemicals that help you feel more relaxed and ready to handle whatever stressful situation you're thrown into, and that help your brain process reward more healthily. Antidepressants and anti-anxiety drugs are used to target these exact neurotransmitters, so you've got a lot to gain from yoga if you struggle with mental illness.

Everything about yoga, from the slow, steady breathing to the inversions, can help lower the amount of cortisol in your brain. Cortisol is a monster of a hormone that appears when you're stressed; it activates the brain amygdala, also known as the fear center, and shrinks the pre-frontal cortex, which manages self-control and discipline.

Studies have found, though, that a regular practice of yoga can be a kind antidote, because it causes cortisol levels to drop, leading to less stress. In 2005, German researchers found that women who were wrestling with mental illness said they felt less stress and less fatigue after three month of regular yoga classes. After running comprehensive tests, they discovered that even the subjects' saliva contained less cortisol after just one session of yoga.

3. Multiple Sections Of Your Brain Grow In Size

At the National Center for Complementary and Alternative Medicine, researchers Chantal Villemure and Catherine Bushnell have been using MRI scans and control groups to figure out how the mind changes after doing yoga for a while. They found that some parts of the brain literally grow in size. Villemure told Scientific American that "with more hours of practice per week, certain areas were more enlarged."

The somatosensory cortex, the mental map of your body, and the hippocampus, the section that helps you squash stress and anxiety, were both larger in the heads of yogis compared to those who never hit the mat. Other parts that got beefed up include: the superior parietal cortex, which helps you concentrate your attention on specific things; the visual cortex; and the precuneus and posterior cingulate cortex, both of which help you create a concrete sense of self.

It's safe to say that your brain has a lot to gain from bending and stretching. The practice could help you with everything from problem-solving abilities to self-confidence.

4. The Gray Matter Density In Your Brain Changes

Gray matter is the part of the central nervous system whose main duties are taking care of muscle control and sensory perception, like hearing, seeing, and remembering. And it only takes eight weeks of getting your yoga and meditation on to see a positive change in gray matter.

At Massachusetts General Hospital, Harvard researchers studied people's brains who participated in the Mindfulness-Based Stress Reduction (MBSR) Program, using a combination of meditation and mindful movement practices like yoga. Comparing images before and after the two months of meditating and practicing yoga, they discovered that the hippocampus (the part that kicks stress out of your life) had much denser gray matter. They predict that the density in this particular section of the mind can lead to more self-awareness and compassion, as well as sharper memory and learning skills.

Curiously enough, the gray matter density in the amygdala decreased. Remember, the amygdala is what jacks up the stress and anxiety levels in your life, so less gray matter means less activity in that area of your brain. Overall, the researchers said these changes in gray matter encouraged people to relax more and enjoy life in general.

5. There Is More Cortical Folding In Your Brain

It sounds weird and slightly disgusting, but cortical folding is a good thing. It's known in the medical community as gyrification, and it occurs in the cerebral cortex when you meditate and do yoga on a regular basis. The more cortical folds you've got, the better your neural processing is. You process information quicker, make clearer decisions, and your memory is sharper.

In the Laboratory of Neuro Imaging at UCLA, researchers found that gyrification might even offset age-related cortical thinning. In other words, you could keep a youthful brain for a longer amount of time. Additionally, extra cortical folding can even help you make sense of your dreams and projections into the past or future. If you're into that sort of thing, of course.

6. Your Parasympathetic Nervous System Is Activated

Yoga is renowned for stimulating this "rest and digest" part of your brain, calming you down and restoring overall balance in your life. Sarah Dolgonos, M.D., is a yoga teacher at Ananda Ashram in New York, and she told Forbes that when the parasympathetic nervous is activated, a more relaxed brain is just the start of it. "Blood is directed toward endocrine glands, digestive organs, and lymphatic circulation, while the heart rate and blood pressure are lowered," Dolgonos says.

All the more reason for you to get to a yoga class. Because while gaining flexibility and muscle tone are pretty solid motivation for getting to the closest studio, you wouldn't want to pass up on the potential brain remodeling yoga has to offer.