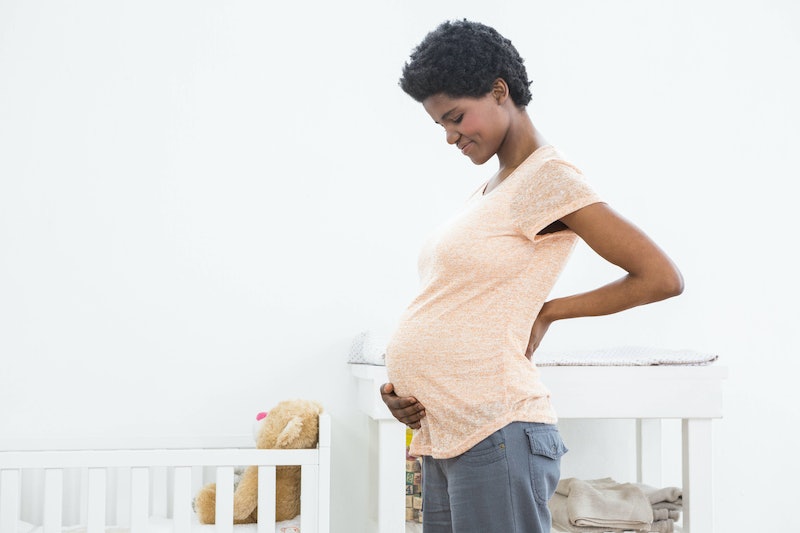 No matter how many precautions you take, having sex can still feel like you're rolling the dice when it comes to pregnancy, especially if you're prone to nervousness — "Sure, we're using condoms/spermicide/the pill/an IUD/are just waving our genitals at each other from across an empty ice skating rink and not touching in any way, but what if something goes wrong and I GET PREGNANT BY ACCIDENT?" For those of us invested in this kind of reproductive neurosis, there may only be a few days a month when we get a respite from these grinding pregnancy fears — when we have our periods. That red smear on our underoos causes us to release a sigh of relief, because it means that we're not currently pregnant, and we can't get pregnant for the next few days... right? RIGHT??!! WHY ARE YOU BEING SO QUIET WHEN I AM ASKING YOU AN EXTREMELY IMPORTANT QUESTION???

And the painful truth here is this: in some cases, you can get pregnant while you're having your period. And (possibly even more shockingly) you can also experience bleeding that may look and feel like a period, even after you're pregnant!

Take a second to regroup/splash water on your face/completely reassess your contraceptive practices; then, let's meet back here and go over the bloody details.

You Can Get Pregnant During Your Period

Have you ever told a partner, "We don't have to use any birth control this time, I'm on my period?" Well, please STOP IT FOREVER. Because you absolutely can get pregnant on your period. Also, the decay of our bodies as we age is inevitable, 99.9 percent of all species that have ever lived on Earth are now extinct, and you will never be able to afford to live in an enormous apartment in New York City with your best friend Monica while you work as a waitress, no matter how many adorable chunky highlights you get in your hair. EVERYTHING IS AWFUL! SORRY!

However, if you have a shorter cycle — one that lasts for, say, 21 days — the risk increases. This is because ejaculated sperm can live inside the human body for several days. Because of this, according to the American Pregnancy Association, if you have a short cycle, having unprotected sex towards the end of your period could mean that live sperm are still hanging around a few days later, when you ovulate.

This all isn't to say that everyone can or will get pregnant if you have unprotected sex during your period. But know that it's a bigger gamble than you probably thought (especially if your cycles vary in length from month to month) — and using protection is the only way to better ensure that you eggo remains unpreggo.

You Can Be Pregnant And Still Think You're Getting A Period

OK, so maybe you didn't bother to listen to the previous section of this article AT ALL. You had sex without protection, spent the rest of your cycle quietly praying to the deity of your choice, and when you finally got your period, you publicly rejoiced, throwing a tiny parade in honor of your empty womb (special celebrity guest: Celine Dion!).

But don't start that dance party yet, cowboy. While you can't get your actual period while pregnant, according to Dr. Janelle Luk, MD, reproductive endocrinologist and medical director/co-founder of Generation Next Facility, you can experience bleeding that may look extremely similar. A "common and harmless reason for vaginal bleeding during pregnancy is implantation bleeding, when an embryo is implanting into the endometrium," Luk tells Bustle. According to the American Pregnancy Association, though this bleeding may be lighter than your average period, it may occur around when you normally experience your period, leading many pregnant folks to get confused and mistake it for a period/ confirmation that they're not pregnant.

Luk also notes that while there's no reason to be concerned about your health if you experience implantation bleeding or subchronic hematoma, a kind of light bleeding that pregnant people may experience when the amniotic sac separates from the uterine wall, you should reach out to a doctor if you're bleeding heavily, or experiencing bleeding accompanied by pelvic pain, while pregnant. "Bleeding can signify an ectopic pregnancy, a miscarriage, or an infection," says Luk, so see a doctor ASAP if you think you might be experiencing it.

I don't say all of this to scare you — OK, that's actually a total lie, I am definitely telling you this to scare you. Because accidental pregnancy is scary as hell! Getting knocked up even though you thought you were kinda, sorta taking precautions is a terrible, terrible feeling. And I'm sure you already have enough things in this life to feel terrible about (if you don't, ask me for some — I've got more than enough to share!).

So don't rely on your period as birth control! Please instead rely on a barrier method, hormonal method, or my personal fave, the "I am too busy trying to catch up with Peak TV to even think about having sex" method. Though there is no 100% effective form of birth control (even tubal ligation only works 99% of the time!), they're all way more effective than just looking at your calendar and crossing your fingers.

This post was originally published on March 25, 2016. It was updated on July 2, 2019. Additional reporting by Syeda Saad.

More like this
12 Aphrodisiac Desserts To Spice Up Your Valentine’s Day
By Kaitlyn Wylde
16 Valentine’s Day Quotes About Chocolate That Will Make You Hungry
By Emma Cueto
25 Galentine's Day Games To Play On Zoom With Your Long-Distance Besties
By Mia Mercado
21 Galentine’s Day Memes To Celebrate Your Best Friends
By Meghan Bassett and Mia Mercado
Get Even More From Bustle — Sign Up For The Newsletter
From hair trends to relationship advice, our daily newsletter has everything you need to sound like a person who’s on TikTok, even if you aren’t.

This article was originally published on March 25, 2016