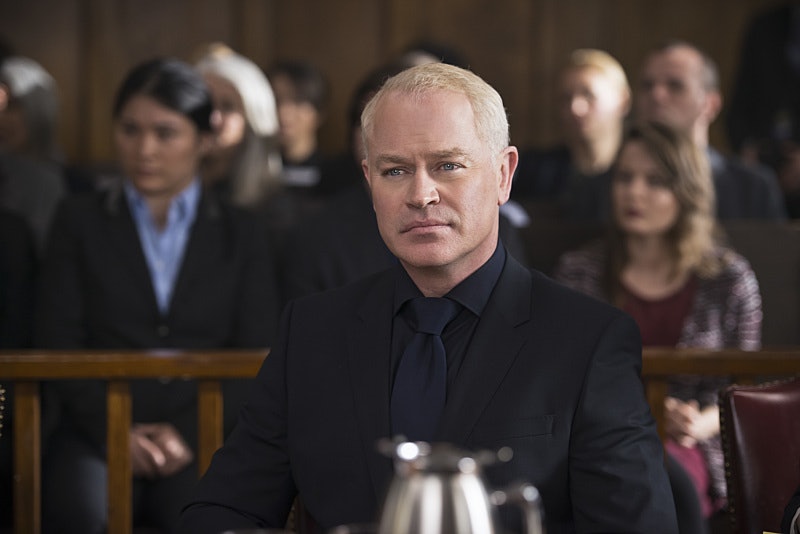 Did anyone else notice the interesting ring theme that seemed to be happening during Wednesday night's Arrow episode "Broken Hearts'? Oliver kept trying to put a ring on Felicity's finger. Felicity kept giving said ring back to Oliver. And then there's the mystery surrounding Damien Darhk's ring, which he managed to sneak into his prison cell. (Darhk: 1, Star City Police: 0) Thanks to Captain Lance's testimony, Darhk has been sent to jail without bail while awaiting trial, and while I would normally consider this a win for Team Arrow, the fact that Darhk didn't seem all that upset about it makes me extremely nervous. In fact, after he placed the hidden ring back on his finger he seemed downright pleased, but why? What is Damien Darhk's ring on Arrow and why does it seem so important?

Right now, the exact relevance of the object is a little unclear, but if I were to venture a guess, I'd say that this ring could actually be the totem to all of his magical powers. Now, I know what you're thinking. But Kelly, didn't Vixen already destroy that totem? And that's a very good point, however, how can we be sure that only one totem exists for him? I mean, not to go all Harry Potter nerd on everyone, but Voldemort had seven Horcruxes. Why can't Damien Darhk have more than one magical totem?

When you think about, making his wedding ring into a totem is a pretty genius idea. No one questions seeing a ring on that particular finger, so it could easily be overlooked. Plus, why else would he have been so happy to put it back on. Even if he really is happily marriage, it's still not a proper reaction to have when you've just been sent to jail. I have a feeling we'll get a better handle of what this ring means as the season progresses, but you can rest assured that its presence isn't a good sign. Whatever causes Darhk to smile like that should make the rest of us feel very, very afraid.