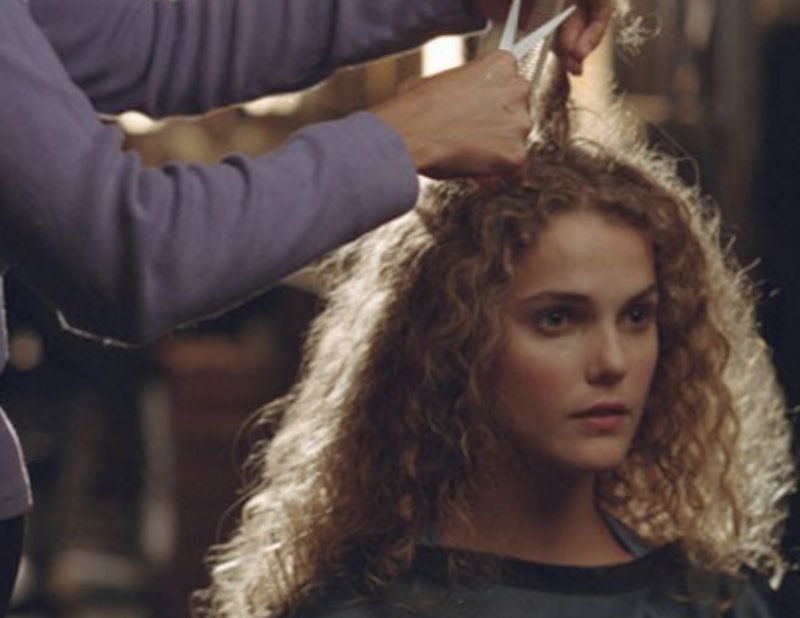 Keri Russell is a queen in my eyes. Even when her character got a dramatic haircut on Season 2 of Felicity, I admired her determination to always do what she wanted, regardless of the consequences. Felicity Porter was braver than any other TV heroine, even bold counterparts like Joey Potter and Jen Lindley. Felicity was impulsive, and this was surprising considering her character was firmly grounded, book-ish, and mousey. But her penchant for making wild, spur of the moment decisions, including cutting all of her beautiful hair off, is one of the reasons I love Felicity so much. Fans of the show were pretty devastated when the lead character changed her look so dramatically but, in hindsight, were we too harsh on Felicity's hair cut? Keri Russell seems to think so.

On Wednesday's Late Night With Seth Meyers, in a segment called "A Message to My Younger Self," Keri Russell brought up the issue of Felicity's hair cut, the fan reaction to it, and the way she dealt with the backlash. Hearing Russell muse on a hair cut she got in the '90s, and the impact it had on her life, is reassuring to anyone who's regretted changing their hair. Hey, we've all been there. So why weren't we more understanding when Felicity cut her hair?

Keri Russell's appearance on Late Night may have been comedic, but there's a huge truth at the center of what she says. While Felicity Porter's hair was iconic, the judgement that ensued when she cut it off was unwarranted. After all, shouldn't a woman be able to do whatever she wants with her hair, or any aspect of her life? Leslie Bruce at Hello Giggles said, "Like many diehard fans of the show, my heart shattered the day magazines and newspapers featured Russell’s new tightly wound pixie cut... I was blindsided and felt betrayed by this revelation — never was I even consulted in such a momentous decision." To emphasize how big of a deal the decision to cut Felicity's hair was, Deseret News discussed the issue at length back in 2000. They quoted Susanne Daniels, the WB Entertainment President at the time, as saying, "Nobody is cutting their hair again on our network and our staff. That's my new stance. No more haircuts!" Has another haircut ever caused so much upset?

Keeping a straight face throughout the segment, Russell delivers a hilarious message to her younger self, and says, "Your life is going to be so exciting, but whatever you do, don't cut your hair short during the second season of Felicity . No, I'm serious. People will freak the hell out. You'll get hate mail. You'll even get death threats. But, gradually, your hair will grow back and your fans will forgive you, but you will never — and I repeat never — forgive your fans." While the audience laughs at this, I can't help but wonder if there isn't a part of Russell that truly doesn't forgive her fans for not allowing her to express herself. More than that, Felicity's hair cut was totally in character, when you think about it. As a person who moved across the country so she could attend the same College as her beloved Ben Covington, cutting her hair off on a whim is exactly what Felicity would do.

Russell ends her speech with the best final line. She says, "You will have learned a valuable lesson: Never trust anyone." Comedy or not, this is great advice when it comes to your hair. Do whatever you want with it, just like Felicity did. Watch the video for yourself and decide whether or not you think Keri Russell is over the hate mail yet.

More like this
How To Curl Your Hair With Leggings, According To TikTok
By Carolyn Steber
An Honest Review Of BeautyTok's Beloved Sleepy Tie Hair Tool
By Rebecca Strong
This Week’s New Makeup Releases & More Beauty Headlines
By Audrey Noble and Erin Stovall
15 January 2023 Beauty Launches Our Editors Can't Get Enough Of
By Rachel Lapidos
Get Even More From Bustle — Sign Up For The Newsletter
From hair trends to relationship advice, our daily newsletter has everything you need to sound like a person who’s on TikTok, even if you aren’t.