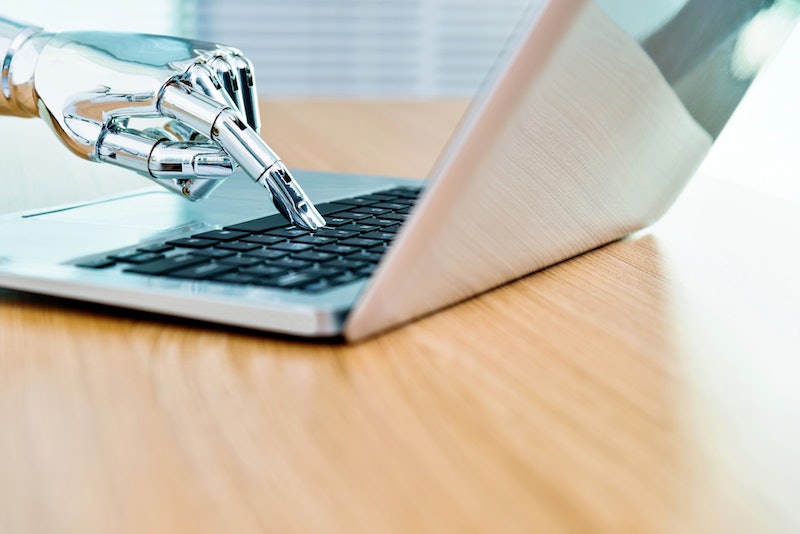 You know how you've been reassuring yourself that robots will never take over the world because they'll never have the same creativity as us? Um, think again: a robot just wrote a novel — and it almost won a literary award. Our time here is up, humans.

The novel is called The Day A Computer Writes A Novel , which is so meta I would love it if I wasn't busy being terrified of the upcoming robot takeover. These are the bone-chilling last words of the novel: "The computer, placing priority on the pursuit of its own joy, stopped working for humans." Did you just get goosebumps?

But OK, OK — it's not as scary as it sounds. The novel was only co-written by the computer program; it had a lot of help from developer Hitoshi Matsubara and his team of geniuses at Future University Hakodate in Japan. The worrying computers-take-over-the-world plot line was actually thought up by the human authors, who then taught the robot all about sentence structure and gave it some vocabulary to play around with. Nonetheless, it was the robot that actually went ahead and wrote the book — and apparently, it didn't do a bad job.

The Nikkei Hoshi Shinichi Literary Award, named after Japanese sci-fi author Hoshi Shinichi, is a pretty unique award in that it's open to non-human participants. This year, no less than four of the submitted novels were created by artificial intelligence (AI) programs, but the judges weren't allowed to know which ones. The Day A Computer Writes A Novel was the only AI-written novel that passed through the first round of the competition, and while it didn't end up winning, it did seriously impress the judges. Human sci-fi author Satoshi Hase, who was on the judging panel, said that he "was surprised at the work because it was a well-structured novel." Yikes.

But don't worry, fellow human aspiring authors — robots might not be taking our jobs just yet. In order to actually win the prize, Hase said that the AI program would need to improve in areas such as "character descriptions." For the moment, humans remain unique in our ability to empathize with each other — and therefore to write convincingly about human emotions. So far, there are no award-winning robot authors. But there's always next year...

More like this
Ashamed Of Your Screen Time Stats? Here's How To Change That
By Alexis Morillo
How To Turn Off TikTok Profile Views So You Can Stalk Other Accounts In Secret
By Alexis Morillo
This Wordle Rival Is Taking Social Media By Storm
By Sam Ramsden
Netflix Shut Down 'Bridgerton' S3 Rumours About A “Very Dark” Storyline
By Bustle
Get Even More From Bustle — Sign Up For The Newsletter
From hair trends to relationship advice, our daily newsletter has everything you need to sound like a person who’s on TikTok, even if you aren’t.