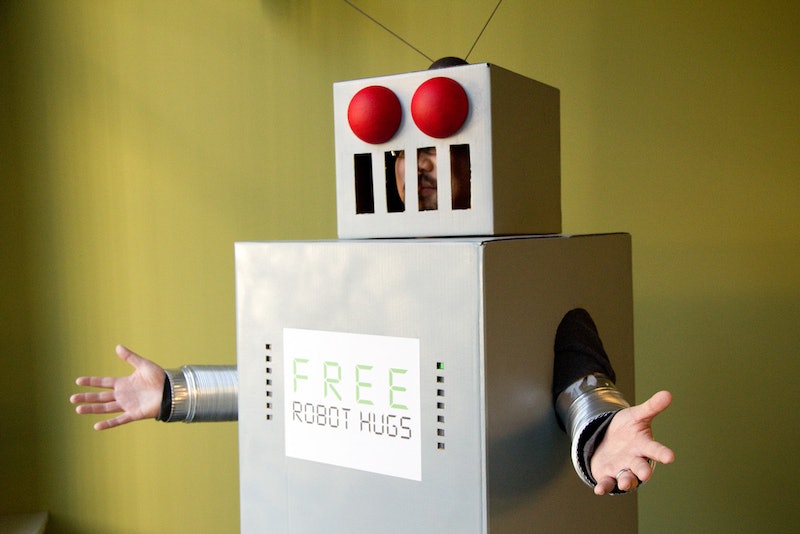 For all its advancements, not every facet of technology may be great news for society. At least that's the premise behind a new campaign that is calling for a ban on sex robots, which have become more and more sophisticated as they gain popularity within the robotics industry.

The campaign's leader, Dr. Kathleen Richardson, a robot ethicist at De Montfort University, says the use of technology to make sex robots is "unnecessary" and "undesirable." One of her concerns is that the roles these robots will play might reinforce outdated gender stereotypes, like a woman as submissive or only desirable for sexual purposes.

"Sex robots seem to be a growing focus in the robotics industry and the models that they draw on — how they will look, what roles they would play — are very disturbing indeed," Richardson told the BBC.

She went on to say that she thinks the creation of these sex robots could be "detrimental" to the relationships between men and women (or men and men, or women and women), and even adults and children.

However, executives at robotics companies are understandably defensive about the need for such products. Douglas Hines, chief executive at True Companion (the company developing Roxxxy, the first sex robot), says there is a real need for these inventions, and argues that they aren't trying to replace or push out 'traditional' human-human relationships.

"We are not supplanting the wife or trying to replace a girlfriend," Hines told the BBC. "This is a solution for people who are between relationships or someone who has lost a spouse. People can find happiness and fulfillment other than via human interaction."

David Levy, author of Love and Sex with Robots, predicts that by 2050, intimate relationships between robots and humans will be commonplace. Despite the absolute insanity that is trying to fathom the apparently-very-near future in which we all mingle with robot-friends, there's certainly something intriguing about the idea of a robot that is capable of socializing, interacting, and even providing intimacy (no matter how synthetic it may be). It's like Her, but with real (?) sex instead of phone sex.

While sex dolls have certainly become popular in their niche market — a man is even married to his doll — there is a marked difference between "dolls" and "robots." While the former is incapable of speech or motion, the latter is designed and programmed to be a "living" companion, which could potentially be problematic. These self-learning robots would (eventually) be able to simulate certain aspects of human behavior, which is equal parts fascinating and terrifying. What does it suggest about women if our robot counterparts are programmed to cook, clean, or give blow jobs? Likewise, what does it suggest about men if their robot counterparts are programmed to throw a football, grill a steak, or play video games?

As with any new technology, we won't really know the sociological, ethical, and other problems presented by intimate robots until they are (literally) upon us. Until then, there will likely be much backlash from those less willing to accommodate new outlets of sexual experimentation, starting with Richardson's anti-sex-robot campaign.

Of course, the notion of "synthetic love," which many sex doll-lovers advocate for, shouldn't be dismissed outright, however far it is from the norm of society. Like all kinks, fetishes, and sexual preferences, those wishing for artificial companionship are certainly within their rights to do so, and it's just a matter of time before we see how popular sex robots might really be.

I think the idea of robot companions is, at the very least, interesting, but I am not obtuse enough to assume it won't come with some serious issues. Here are three potential problems we might have with the onslaught of sex robots — because not every piece of artificial intelligence can be as perfect as Wall-E.

I know that these robots will almost certainly have the ability to converse with us; some sex dolls are already on their way to having the capacity for speech. However, how sexy can it really be to have a robot doing the dirty talk? Sure, technology is amazing and I'm sure they will have the ability to react to what we're saying, but then again, so does Siri, and I'm pretty sure there are certain phrases I could say to her that she simply would NOT get. Free good idea: Have Jason Derulo, self-proclaimed king of dirty talk, help out with the sex robots project.

One of the main points of these robots is to provide intimacy as well as sex. I could be totally off-base here, but I am having a hard time imagining a robot that isn't metal, cold, and rigid. Not exactly the ideal snuggling partner, IMHO. Maybe they come with a free teddy bear?

I say this partly in jest, and maybe I've just seen Wall-E one too many times. But if Wall-E and Eve had a real connection, who's to say that robots won't soon become autonomous, and then does that mean we're taking advantage of them?! Artificial intelligence is a scary thing, and I won't lie and pretend I have the first clue about the mechanics of it. It feels somehow grimy to buy these robots for our emotional and sexual needs, though, just in case they turn out to have thoughts and feelings of their own one day. Consent is always necessary, even with robots (maybe?)!