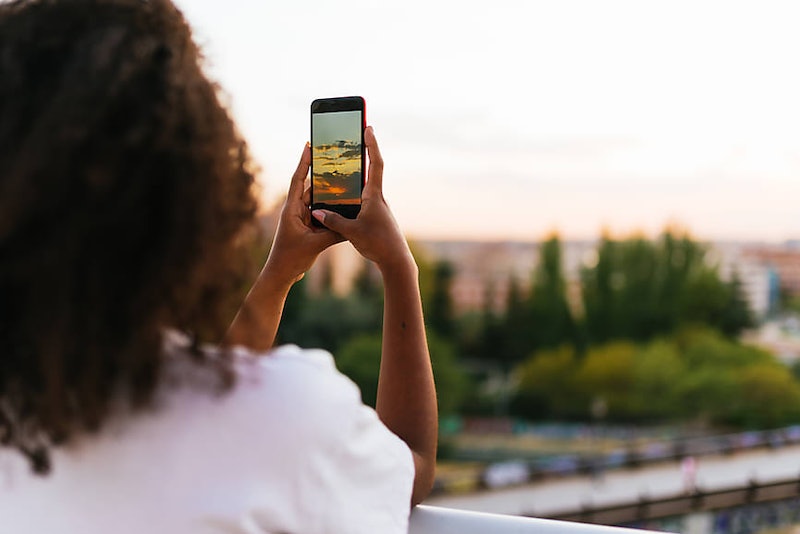 In the world of Facebook photo posts aimed to make your ex think you're doing totally fine and Instagram posts aimed to create the illusion that our lives are pristine and perfect, photo editing apps have become social media essentials. With so much clutter on the app store, it's important to narrow down the best photo editing apps to help your Instagram stand out — after all, how else are you going to fool people into thinking you're tanner than you are (if that's how you roll)? Shoutout to the Internet for making this all possible!

We may take photo editing apps for granted because they're just a natural part of our posting routines now, but it's pretty cool to think about how far we've come. Back in the good ol' days of actual film-based photography, people had to manually edit their photos using techniques on the enlarger, like burning and dodging or changing the concentration of the chemicals they used to develop the images in the first place. Then the world was both cursed and blessed with Photoshop and similar pieces of software that enabled professional photographers to enhance their photos and advertisers to ruin our self-esteem (kidding — kind of). But photo editing apps can be used for good, too, like bringing out certain colors in an image, filtering it to create a certain mood or aesthetic, and correcting errors that may have occurred during shooting.

With that in mind, let's explore some of the best photo editing apps that will help you stand out on Instagram if you're able to harness their powers correctly. To show some examples of the different features of these apps, I'll use a photo I took of an abandoned truck in the middle of the California desert. Here's the original:

Now let's take a look at some apps that will help this photograph reach its fullest potential.

Afterlight is a great, free photo editing app for people who are looking for more editing features than Instagram's in-house editing software, but don't need anything complicated or professional-grade quite yet. The app has over 50 different filters, which you can access by tapping the color wheel icon, and you have the opportunity to unlock more by liking the Afterlight page on Facebook.

In addition to these color and tone filters, Afterlight also has filters that completely transform the texture of your image — for example, you can make it look dusty, cracked, or papery. You can also simulate different light leaks — just tap the film strip icon and select "Light Leak" to simulate the effect of light on film. Not good enough? Try and then buy the "Instant Film" filter pack for 99 cents and you'll get an additional set of light leaks.

You can also place your photos in differently shaped frames by tapping the square with a circle cut out on the bottom right of the editing bar. From here, you can put your image in a circle frame, star outline, and even have it show up as a letter. In the image above, I've applied a light leak, boosted the contrast and colors, and sharpened the image a little.

Snapseed is a step up from Afterlight in terms of complexity; indeed, it's closer to Photoshop, except that it's a lot more affordable — because it's free! If you're looking for simply tacking filters onto your photos, this is certainly not the best app for that, since there are only 12 filters available and they're all pretty dramatic; however, I would recommend exploring the "Black & White" filter kit in the app for some range and flexibility for how your whites, grays, and blacks look.

The best features of Snapseed are under the "Tune Image" and "Selective" buttons you get after tapping the writing tool icon in the bottom right, as well as the histogram. which is offered through the bar graph icon on the left. The histogram button allows users to see if the tones in your image are distributed properly, and the closer you are to a bell curve, the more properly an image is exposed (though not all well-exposed images show a bell curve, so don't get too hung up on it). "Tune Image" lets you change the standard things like brightness, contrast, saturation, shadows, and highlights; "Selective," meanwhile, is best for selfies and photos of people, and allows you to spot-edit images by changing brightness, contrast, and saturdation.

Lightroom is the brainchild of Adobe, the same software company that brought us Photoshop. The app is not only a good way to edit photos, but it's a good way to organize them if you, like me, have a very cluttered photo library on your phone.

When you open up your image, you'll find three icons: "Crop," "Presets," and "Adjust." When using Lightroom, I like to go straight to "Adjust," since it often gives me the most flexibility with the kind of editing I do. Like with Snapseed and Afterlight, you have some basic adjustment options for things like tint, temperature, exposure, contrast, and vibrance; however, you also have some unique ways of editing in this app that aren't offered in the others.

To access these options, tap the camera aperture icon on the left. From this point, you can edit using tone curves, split toning, and vignetting, as well as adjust the color of your image. My favorite feature under this section is the dehaze; since I live in L.A., and a thick smog seems to encompass the city at all times, this feature comes in super handy for clearing up skyline shots.

VSCO Cam is great for editing and organizing, but one of my favorite features of the app is all the cool options it gives you to adjust your photo before you take it, as opposed to after. The features offered by VSCO also aren't built into many smartphone cameras, so that's an added bonus right there.

To take a photo with VSCO, tap the open circle on the bottom right of the gallery screen. From there, you can adjust white balance, ISO, and even shutter speed for a high quality image. You can even spot focus and expose, so if one part of your image is over-exposed, you can decrease the exposure without sacrificing the amount of exposure on the rest of your image. It's pretty nifty, and very useful for those looking to have more control over what they shoot. This also means that VSCO might be better than your smartphone's camera all on its own in unusually high or low light; just play with ISO and shutter speed to light your image the way you want without light source issues.

Font Candy is a little different from the photo editing apps above in that it's less about editing the image and more about adding graphic design overlays and typography enhancements to your image. You can add pre-made quotes and designs on top of your image, or you can generate your own using the "Add Text" and "Color" icons. When it comes to adding text, you can choose font, placement, and color, as well as animate the text to move into your image or appear on your frame as you want. It's a great app if you want to put some words or design elements to an image, either to enhance the look of the image or attach some inspirational sentiment.

Each of these apps have their own strengths and weaknesses, so find the editor that's best for you and your skill level and style and edit away, all you smartphone photographers!