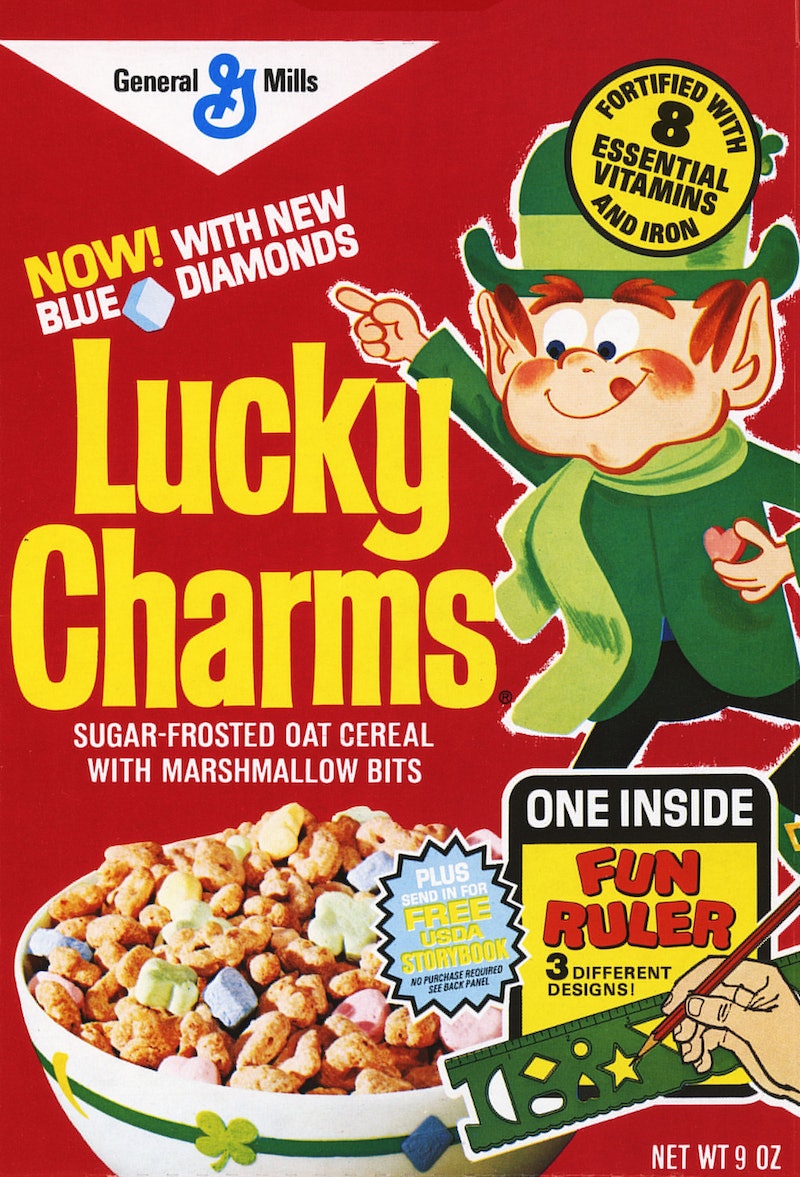 Lucky the Leprechaun, the Trix Rabbit, Sonny the Cuckoo Bird… these fellas and more have accompanied our breakfasts for as long as many of us can remember. But have you ever wondered what your favorite cereal mascots used to look like long before you came along? I know I have — which is why I think it’s so cool that, in honor of its 150th birthday, General Mills has given us a look at what some of these familiar faces have looked like over the years, from their humble beginnings all the way up to the present.

And yes, I do mean 150th birthday — General Mills’ history goes all the way back to 1866, when Cadwallader Washburn built a flour mill at St. Anthony Falls on the banks of the Mississippi River near Minneapolis, Minn. In 1877, Washburn partnered up with John Crosby, forming the Washburn-Crosby Company — and although Washburn died in 1882, the company he had helped to build would go on to enormous things. In 1928, Washburn-Crosby President James Ford Bell merged the company with a whopping 26 other mills, creating General Mills.

The company continued to expand over the years, and, well… maybe I’d better just let this video give you a taste of all the things General Mills has done during that time. It may only be a minute long, but you’d be amazed how much you can pack into 60 seconds if you really try:

Without a doubt, though, some of the most famous faces to come out of General Mills’ 150-year-long history are the ones that we’ve been seeing plastered on the boxes of our favorite cereals ever since we were kids. Indeed, most of these mascots actually came into being long before the ‘90s — and in many cases, both they and the breakfast foods they represent originated decades prior, even going back as far as 1950s and '60s. Here’s a look at how six cereal mascots have evolved over the years, because wow — when the times change, they really change.

Fun fact: Lucky Charms’ marshmallows have a name, and it’s not just “marshmallows.” Officially, they’re known as marbits, and when the cereal debuted in 1963, there were only four of them: Green clovers, pink hearts, orange stars, and yellow moons. The actual cereal pieces (which are oat-based, as opposed to rice- or corn-based) came in the shapes of bells, fish, arrowheads, clovers, and X’s. Notice anything odd about this box, though?

If you noted the missing mascot, congratulations! You're spot on: Lucky the Leprechaun (full name L.C. Leprechaun) wasn’t actually present at the initial launch. He didn’t come around until 1964, the creation of product developer John Holahan. The Lucky of the ‘60s was a little older looking that the sprightly little guy we later came to know and love; what’s more, he evolved dramatically over the years — even being replaced for a brief period.

This was his replacement: Waldo the Wizard, who graced the Lucky Charms box for part of 1975. He didn't last, though, and Lucky was back later that year. See the picture all the way up top? That's what the leprechaun looked like when he returned.

By 1989, Lucky had started to look closer to the Lucky of the ‘90s: Spry and rosy-cheeked.

And by 1993? Well, that’s the Lucky many of us still identify with today; worth noting is the fact that he also hasn’t changed much in the years since then. At this point, Lucky became less like a comic strip character and more like a cartoon character, fitting in with the animated television show aesthetic of the ‘90s.

The cartoon trend has continued to develop, too: This is what Lucky looked like in 2011. But no matter how much he changes, they’re still always after his Lucky Charms.

Like Lucky Charms, Trix didn’t actually have a mascot when it first hit grocery store shelves. Unlike Lucky Charms, however, it took a number of years before said mascot actually arrived: The cereal debuted in 1954, but the Trix Rabbit, created by George Karn, didn’t accompany the box until 1960. And as you can see from the picture here, he looked… a little different than he does today — almost like a Claymation character or a hand puppet.

By 1961, though, the Trix Rabbit had flattened out a little and become more two-dimensional, characterized by the strong outline that’s still used today.

And by 1980, his form had settled into more or less the same design he would hold for the next 20 years. The phrase “Silly rabbit — Trix are for kids” first popped up in 1988.

As is the case with Lucky, the Trix Rabbit has also begun to veer into a more and more heightened level of cartoonishness; his 2015 incarnation has oversized ears and a slightly more manic expression. But hey, at least he’s actually been able to eat Trix a few times over the years — after voting campaigns in 1976 and 1980, he was finally granted a taste of the food he so desperately desires.

Cinnamon Toast Crunch is a baby compared to most of these other cereals — it launched in 1984, with baker Wendell and his two sidekicks, Bob and Quello, hitting the box in 1987. Wendell wasn’t called out by name on the box until 1990, though, and by 1991, Bob and Quello had gotten the boot.

Throughout the ‘90s, Wendell — like so many other mascots — became more and more cartoon-like in appearance; although his first incarnation looked like a kindly old man, his later look is a little more like the baker version of a mad scientist.

Wendell seems to be enjoying retirement these days, though — he hasn’t appeared on a Cinnamon Toast Crunch box since 2009. The current mascots, the Crazy Squares, debuted in 2010.

Cocoa Puffs (which, I must confess, are a personal favorite — I’ve always had a soft spot for foodstuffs that let me eat chocolate for breakfast) first hit cereal bowls everywhere in 1958, with Sonny the Cuckoo Bird arriving a few years later in 1962. A couple of things have remained fairly consistent in his design throughout the years: He’s always orange or red and yellow, and he’s often wearing a pink or red striped shirt (although he has changed clothes a few times over the years). That said, though, in his early years — the above image is from 1965 — he was a lot less humanoid than the Sonny I grew up with in the ‘90s.

Sonny looked mostly like this throughout the '70s and '80s...

Interestingly, the Sonny of today actually bears more than a passing resemblance to his 1960s counterpart. The 2015 version is a little more anthropomorphic, true — but he’s much more birdlike than he was for most of the ‘90s. Time really is a pendulum, isn’t it?

Officially called BuzzBee, the Honey Nut Cheerios mascot actually didn’t have a name at all for the first 20 years of his life. Above is what he looked like when he was first introduced in 1979...

...And here’s what he looked like in 1999, when a contest for kids between the ages of 5 and 12 finally granted him a moniker of his own. Although the name BuzzBee was suggested by several children, 11-year-old Kristine Tong of Coolidge, Texas got the credit, largely because she actually sent in the required 50-word description explaining her choice. Sometimes it pays to follow the rules.

That’s still pretty much what BuzzBee looks like today, by the way; he’s a bit more detailed, perhaps, but both more cartoonish and more human than he was back in 1979.

I saved my favorites for last: Monster Cereals. The line launched with Count Chocula and Franken Berry in 1971, and like Trix, the mascots for these two cereals were designed by George Karn. Boo-Berry came along in 1973 and Fruit Brute in 1974; however, Fruit Brute was discontinued in 1982 to make way for Fruity Yummy Mummy.

As is the case with pretty much all of these cereal mascots (except maybe the Trix Rabbit), the original mascots for each of the Monster Cereals were relatively flat and two-dimensional in appearance. It was only in the late ‘90s that they started to gain the more three-dimensional appearance that has become de rigueur in more recent decades.

Alas, though, they’re all a little hard to come by these days; Count Chocula, Franken Berry, and Boo-Berry are typically only available during the Halloween season, and Fruit Brute and Yummy Mummy rarely make appearances (though they were both around in 2013). Still, though — the rarity makes them taste all the better, doesn’t it?

Head on over to General Mills' 150th birthday website for more about the history of the brand. My, how the time does fly!