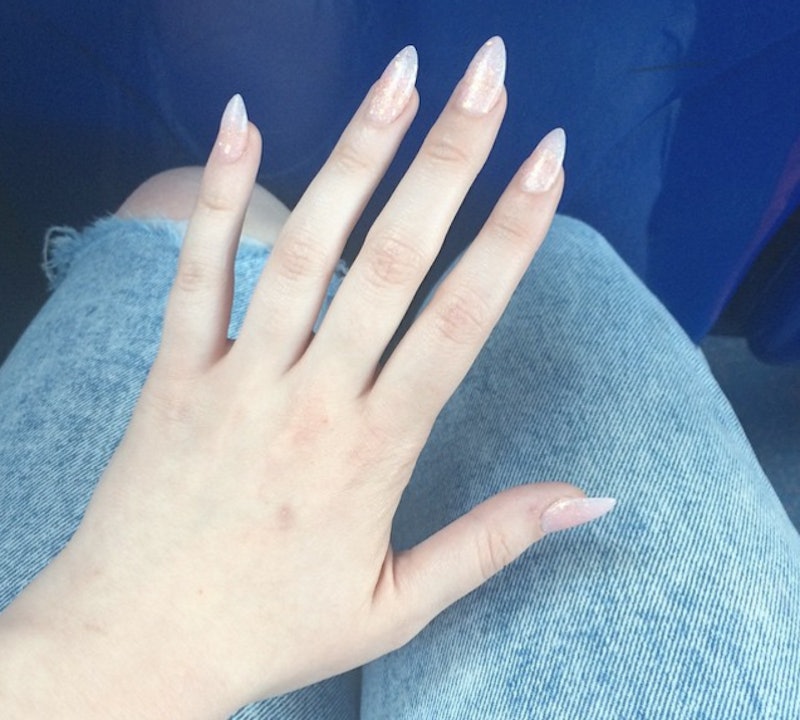 It was only in the past couple of years that I became obsessed with wearing acrylic nails. I love everything about them, from waking up and feeling instantly glamorous, to the compliments I receive, to my ability to spear food on the end of a finger, to pretending to be a witch. Basically all the usual things that come to mind when you think of sporting acrylics.

Over time, getting acrylic nails became my reality more often than not. Where I previously left the manicure to special occasions, the enjoyment brought to me not only by having acrylic nails but by getting my nails done was something I wanted as a constant in my life. It was like a treat to myself every two and a half weeks: A vain little beauty treatment that I could indulge and pamper myself with.

Choosing acrylic nails as a self care crutch may seem indulgent. I know there are many people who couldn't afford such a luxury, as well as those who wouldn't find comfort in a beauty treatment. But I'm not embarrassed about embracing the things that help me. Many folks have discussed how their beauty routines have help their anxiety, and I'm of the mindset that whatever helps, helps — no matter how vapid or vain it may come across to others.

Three months into my new nail routine, however, I've had to stop wearing acrylics. Or at least stop wearing them for a month.

This decision was not one I chose to make. I didn't want to give up on the vanity or empowerment that my nails had given me. Rather, I was listening to the sound advice of my nail technician, who thought I needed to give them a break. Nails are her career, after all, so she knows best, and I felt I would be silly to ignore her opinion.

Upon arriving at the nail bar last week, with one nail already fully ripped off — like, the actual fingernail and all — I came in to get the rest soaked off and replaced. I was happy enough to let my pinky fingernail rest. It hurt when I touched it and it looked gross. But I didn't want to end up with no nails at all.

On original inspection, my nail technician said I could get another nail on top, but that it would be more likely to snap off than the others. Not wanting to have a full manicure and one stumpy nail, I reconsidered letting my hands breathe for a while. Plus, as I mentioned, listening to your technician's advice is an important aspect of wearing acrylics anyway.

But after taking the rest of my nails off, she warned me against getting the nails put back on altogether. My nail beds weren't destroyed yet, but my natural nail was starting to separate from the bed. With another set, I'd be risking ripping off more nails than just my pinky. This possibility didn't appeal to me, considering it would mean giving up the one luxury I typically afforded myself. But on the other hand, having no nails at all sounded a hell of a lot worse than having natural nails for a few weeks.

Even as I asked for a simple polish manicure, my technician refused, warning that colored polish would trash my nails at this point. It was a fact that I wasn't aware of, but one that I think all people should be wary about. If your nails are feeling particularly weak, consider not painting them at all. It might be your body's clue that you should be airing them out.

Now I've been left with not only an extremely short set of natural nails, but natural nails that I can't even hide behind my favorite red polish. I'm adult enough to not give in to getting my nails done elsewhere by someone who'd rather have the money than protect my nails' health. But at the same time, my newly lost acrylics are taking a toll on my self esteem.

Although it's only been a week, the gap in my routine is tangible. Tracking the progress of my acrylic nails was a habit I hadn't realized I had, until I stared at my stubby nails, constantly expecting longer versions to be there.

Waking up every morning without that added bit of glamour and drama has been sorely missed. Snapchat stories of coffee cups and new lipsticks just aren't the same without that coffin-shaped tip. No more compliments. No more pretending to be a '50s glamour puss or a teen witch. Just my boring, average, human hands.

Some might think I'm being "dramatic," but I think it's important to recognize our crutches and the mental health benefits of our beauty routines. Even if we're talking about something as simple or as seemingly silly as having acrylic nails.

I know that as soon as that little fingernail grows back, I'm getting a new set of acrylic nails. I might even splash out on gel acrylics, so I can not only protect my nails more, but have a beautiful set of glitter tips.

If you're planning on making acrylic nails part of your beauty routine, my advice would be to avoid picking them off if they start feeling a little loose. Better yet, always heed the advice of your nail technician. I'd probably be a nail-less version of myself without the help of mine.

Wearing acrylics for three months, only to have to take them off unexpectedly, reminded me of the importance of finding small things that breed happiness. If ever a routine is important to you, but could potentially hurt you, it's crucial to think of alternative solutions. This isn't something I plan on giving up, but now that I know the risks involved, it is something I plan on being more careful with.