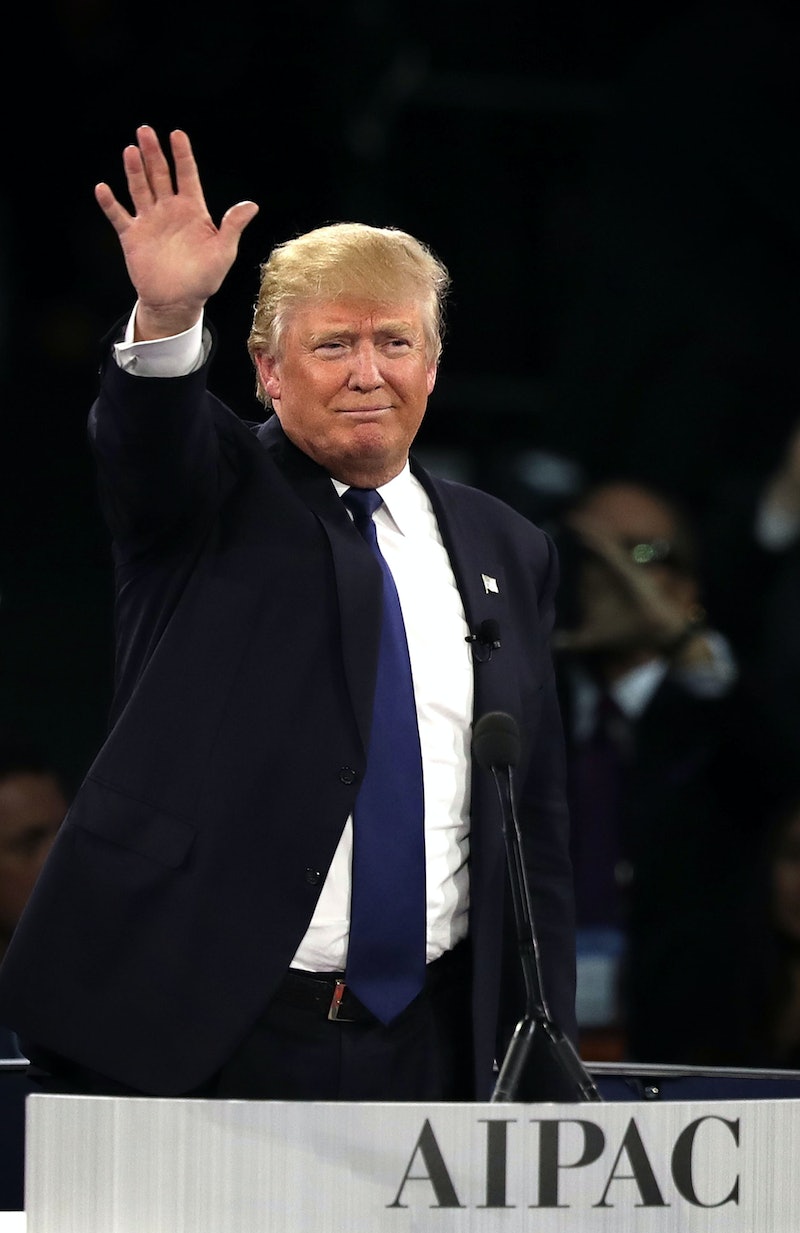 On Wednesday, U.S. Rep. Seth Moulton (D-Mass.) compared Donald Trump's rise to Adolph Hitler's, as people are wont to do these days. A diverse array of critics of the Republican presidential front-runner — from comedian Louis C.K. to Anne Frank’s stepsister to Mexican president Enrique Pena Nieto — has uttered something along the lines of Trump = Hitler. (Nieto threw in Mussolini for good measure.) There's something about the Trump 2016 run that makes people cry Hitler at unprecedented levels, even for the Internet age.

In other words, Godwin’s Law is being invoked like never before. Don't know what Godwin's Law is? Coined by attorney Mike Godwin in 1990, it states, "As an online discussion grows longer, the probability of a comparison involving Nazis or Hitler approaches 1." In other words, Godwin’s Law means that as long as you exist as a person with an opinion not miraculously agreed upon by every single person in the world, the collective psychic cesspool that is the Internet will eventually call you Hitler.

Godwin’s Law is normally a pretty straightforward thing, in terms of whether it is being applied for (melo)dramatic effect or not. But as Trump’s campaign marches on and his base grows wider, their violence and nationalism grows louder — and Godwin’s Law loses a degree of rhetorical clarity. It’s meant for people wildly grasping at Hitler or the Nazis or the Holocaust as hyperbole, without actual factual relation. What happens when the similarities between the person being compared to Hitler and, well, Hitler are more eerily present than you'd expect?

While some people are calling Trump Hitler simply because they believe him to be a horrible person, others are not making the comparison just because of that. Some critics are comparing Trump to Hitler because they’re seeing an increasing number of historical parallels between their respective rises to power. And because people invoke Hitler so recklessly and so often that Godwin’s Law became a thing in the first place, it’s a tricky argument to get non-believers to take seriously.

Just consider how Congressman Moulton, walking on all kinds of eggshells, even though you can tell he believes in the urgency of what he’s saying. “When you’re in politics, one of the cardinal rules is you never say what I’m about to say,” the former Iraq veteran said in a taped conversation with the Boston Globe on Wednesday. “People should read the history of how Germany elected Hitler." Moulton then added:

I’m not saying that Donald Trump is necessarily Hitler ... I’m not saying that. But you ought to understand how an unbelievably educated advanced society can elect a demagogue and how bad it can get as a result.

The ethics of the whole phenomenon are murky at best. Does Trump, whose personal #brand of racism will *probably* not lead him to exterminate millions in gas chambers, deserve to be indiscriminately called Hitler? No. But is it enormously important that people be educated about the disturbing ways the two leaders created their paths to power? Absolutely. There is a world of difference between contextualizing Trump’s racist policy proposals in terms of documented history and some egg-avatared MRA dude hissing rape threats at “feminazis” on Twitter.

It may be helpful here to note that some of the similarities between Trump and Hitler that people are quick to point out should bother and disturb us more than others. When Trump asked supporters at a rally to pledge their loyalty by raising their right hand, it was surreal — but it didn’t necessarily mean anything. It might have been an attempt to dog-whistle white supremacists in his base, but it might also have been an act of mind-boggling ignorance. (I actually feel the same way about the Megyn Kelly “blood coming out of here wherever” remarks — not that it in any way lessens the bread-and-butter misogyny of The Donald, but I believe there’s at least a possibility he was just babbling.)

But when people talk about the latent racism and nationalism coalescing around a power-hungry, insecure, and charismatic opportunist who has tapped into the disenfranchised and the angry just as they reach their boiling point — well, that means something. The similarities between Trump’s rhetoric toward Muslims and Hitler’s toward the Jews mean something. Those commonalities have left Godwin’s Law and the Internet behind and jumped, legitimately, into the real world.

We all know what history does when we don’t learn from it. Congressman Moulton was not wrong to say what he said.

Trump, for his part, would like us to know he does not aspire to be Hitler. But those of course are just words, not anything backed up by actual policy change. Plus, if you catch him in a different mood, he might tell you the comparison doesn’t bother him, since he’s just doing things as FDR would have done.

I do not think Trump is literally the new Hitler. But I also don't think the comparisons are unwarranted or unfair, and I don't feel bad about using them. It’s vital that people see Hitler’s rise not as an isolated historical incident, borne of circumstances that could never happen again, but as something closer to home. It's the only way to make sure another leader even remotely like him achieves such power.