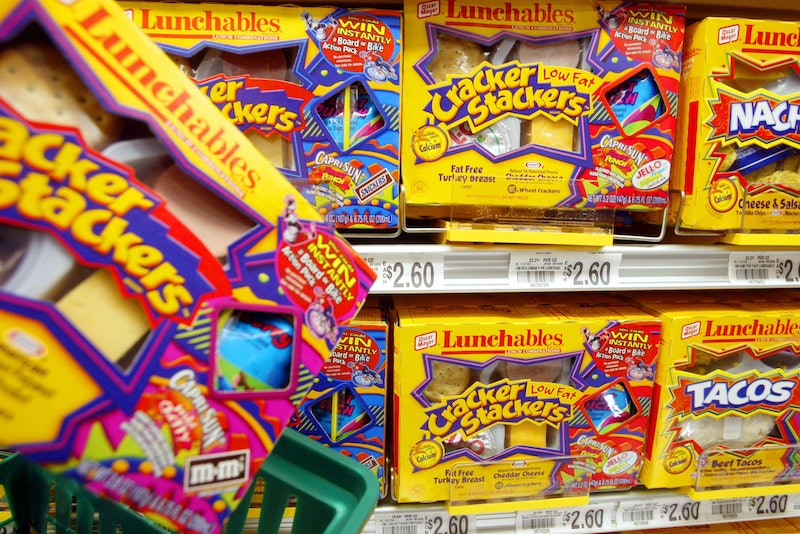 Kids who went to school in the ‘90s will remember food trading as an essential part of growing up. Everyday, the bell would ring, we’d find our seats in the cafeteria (potentially after a few anxiety-filled minutes of wondering who we were going to sit next to), and an intense negotiation would ensue: Divvying up our lunches, whether they were purchased from the cafeteria, made by our parents, or put together with our own hands.

Trading snacks at lunch wasn’t an exclusively ‘90s activity, of course. I assume that lunch-trading has been around ever since lunch was invented, and that kids these days negotiate their lunches as avidly as we ‘90s kids ever did. But the ‘90s had its own specific set of highly desirable snacks that functioned as lunch currency. To be at the top of the lunch-trading hierarchy, most snacks had to have some combination of these qualities:

For most of us, snacks like these were a rare treat (if we were allowed to have them at all), but there was always that kid who had all of the trendy pre-packaged foods, and he or she ruled the cafeteria, while the rest of us looked on enviously and tried to figure out how we could wrangle a Fruit By The Foot in exchange for real grapes (blech). It was a messy, emotional daily ritual, a ruthless, ambitious Game of Thrones-esque battle for lunch supremacy.­ It didn’t matter if your mom had lovingly made a super delicious, healthy sandwich or left you a sweet note with a heart on it in your brown paper bag — if some other child had a goddamn Lunchable, you were going to do everything you possibly could, short of selling your soul, to get that plastic tray of cheese and crackers. (OK, so maybe it wasn’t quite that dramatic, but it certainly ­felt that way).

Keep reading for 14 foods in the ‘90s that were high-value trading stock:

What was it about Lunchables that made them so desirable? The sweaty cheese? The wet lunchmeat? The fact that there never seemed to be enough crackers? I remember Lunchables not being that great, and yet I wanted them so much. Even when my mom would make the exact same thing, only better — good crackers, real cheese, better quality meat — I would have traded it in a second for the corporate version. Apparently, my 5th grade self was a sucker for that yellow packaging.

Dunkaroos were a legit genius invention. I still regularly dunk pretzels and graham crackers into Nutella, which is basically the same thing. (Only fancy!)

Launched in the mid-80s, these ridiculously giant Oreos were around for only the first couple years of the '90s, but if you managed to have one at your second-grade lunch table, you were BOSS for the day.

Nothing says “yum” like spreadable cheese product on a buttery cracker. You just had to make sure you didn’t lose the red plastic cheese-spreader. Otherwise, you’d be stuck ineffectively dunking your crackers into the cheese. The HORROR.

I think Gushers were so popular because they were the closest things you could get to candy that would still count as part of a “healthy” lunch (and I use that term very loosely).

Way cooler than regular juice, Squeezits came in plastic bottles with characters like “Chucklin Cherry” and “Grumpy Grape” on them. To get the fruity, sugary liquid out, you had to squeeze the bottle, which for some reason we all thought was super exciting and far superior to old-school bottles that just, you know, pour liquid out. Maybe we were all seduced by this strange and frankly disturbing commercial that portrayed the bottles coming to life and going all wobbly and giggly as kids attempt to drink from them.

Fruit by the Foot

No lame-o Fruit Roll Ups for you, no siree.

(And I’ll cop to eating my fair share of Fruit by the Foot rolls as an adult. What? They’re tasty.)

Even if you didn’t actually like Bugles, you wanted them so that you could have Bugle fingers.

These little crackers were simple in concept (Graham crackers — that look like bears!), but they were super addictive.

“You’ve got eat them… before they eat you!” Who doesn’t like a little violence mixed in with their fruit snacks? Shark Bites were yummy, but let’s be honest: It was all about getting as many Great White Sharks (aka opaque fruit sharks with a mysterious flavor) as possible.

After Squeezits, which were more unnatural looking and therefore more desirable, Capri Suns were the most loved lunch beverage. And they got even better in middle school when I learned to freeze them — by lunchtime, my frozen Capri Sun would be partially melty, and I could cut off the top and eat the icy juice with a spoon. Instant slushie!

Leftover pizza was not a '90s thing of course (Plenty of adults — ahem, me — eat in on the regular), but at a '90s kid’s lunch table, a slice of real, cold leftover pizza could basically trump any other food item, even the beloved Pizza Lunchable.

More like this
The 'Kenan & Kel' Reunion On 'SNL' Took A Dramatic Turn, Thanks To Keke Palmer
By Brad Witter
The First Trailer For 'That '90s Show' Includes So Many Nods To The Original Series
By Jack Irvin, Alyssa Lapid and Grace Wehniainen
Here’s How To Make The TikTok-Viral Sushi Bake
By Alexis Morillo
TikTok Is Obsessed With Dolly Parton’s Houseware Line
By Alexis Morillo
Get Even More From Bustle — Sign Up For The Newsletter