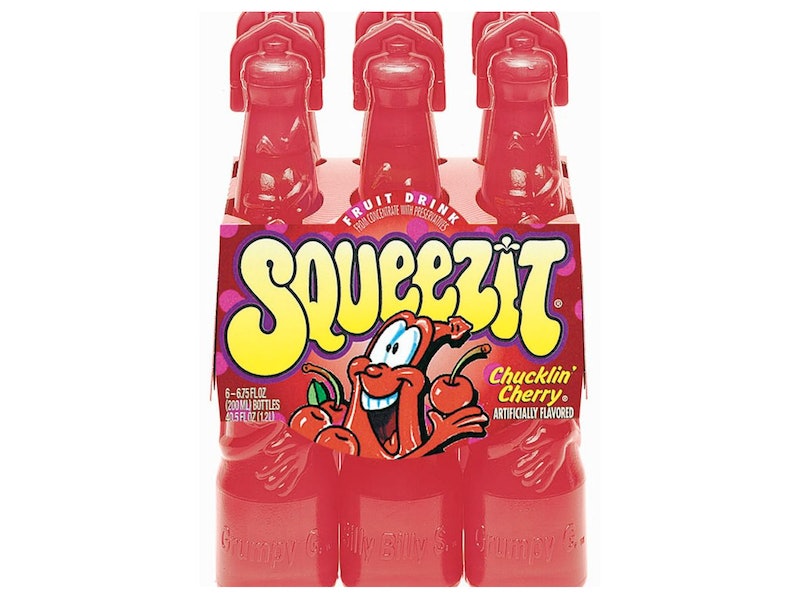 When it comes to kid-related fare, the branding is everything. In the 1980s and 1990s, the marketers of the world somehow determined that in order to grab children's attention, all they had to do was make products as far away from from colors found in the natural world as possible. Blue Pepsi, purple ketchup — the more radioactive-seeming, the better. That might be why Squeezits, the line of juices with a lot of personality, were already behind in the game; many, however, still look back on them fondly. But whatever happened to Squeezits, anyway? Where did they go — and why did they vanish in the first place?

First introduced to kiddos in the 1980s, Squeezits were juices with the gimmick of a bottle that you had to squeeze. Instead of the standard juice box, the vessels that carried this particular drink were plastic bottles with wacky character faces molded onto one side. Their name came from their modus operandi — that is, the fact that you had to squeeze the bottles order to get any juice out of them. With flavor names like Chucklin' Cherry and Grumpy Grape and the tagline "Squeeze the fun out of it," it appealed to a crowd that liked to play with their food as much as possible.

The drink was no Surge, but it was still a solid lunchbox staple for over a decade — even despite these horrible ads, which feature children drinking out of and torturing anthropomorphized bottle-men:

In addition to Chucklin' Cherry and Grumpy Grape (later changed to Gallopin' Grape), flavors included Berry B. Wild, Silly Billy Strawberry, Rockin' Red Puncher, Mean Green Puncher, Smarty Arty Orange, and Troppi Tropical Punch. What does "Troppi" mean? Where is the grape flavor gallopin' to and why? Is orange the flavor or just the color? These are unanswerable questions, my dudes. Just accept it. Don't be Grumpy Grapes.

Having experienced some long-term success, the personality-driven juices decided to switch it up in the '90s, producing "mystery" flavors that came in black bottles preventing its drinkers from seeing the color of the liquid inside. They also collaborated with LifeSavers, releasing Wild Watermelon, Blue Raspberry, and Tropical Fruit flavors. Still, though, my personal favorite were the ones with color-changing pellets — the ones that came with weird little capsuls you dropped in the bottle to make the drink magically change color.

The last of the Squeezits were produced in 2001 once sales finally began going south. In the years since, there have been rumors of a petition floating around the Internet; however, it seems that the majority of those keeping the memory of Squeezits alive are tweetin' all by their lonesome. And by "keeping the memory alive," I mean no one seems to have noticed that Squeezits have been off shelves for 14 years until, like, now.

Sorry, guys. You had a good run. Hope the Great Refrigerator in the Sky is treating you well — and keeping you free from the sticky, torturous hands of children.