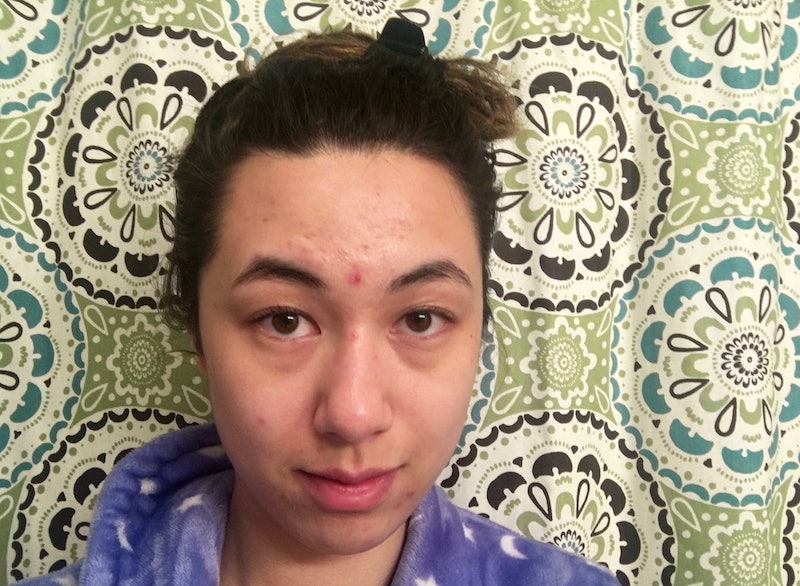 Even though I gravitate toward a more lazy girl-friendly skincare routine, I've been a long-time fan of double cleansing. I'm also a huge proponent for makeup removing wipes, for obvious reasons of convenience. So when I learned about triple cleansing, which, according to Charlotte Cho of SokoGlam, is the newest way to amp up your cleansing routine, I knew I had to give it a shot.

For me, cleansing wipes and double-cleansing are an either-or kind of thing. Either I take the time to do a proper double-cleanse, or I (often drunkenly) swab my face with a wipe minutes before going to bed because the thought of actually washing my face is too overwhelming. Combining the two steps seemed like overkill, but my skin had been acting up, in part because I've been wearing more makeup, so I figured it was time to test out something new.

For my own triple-cleansing, I'd start off with Simple Cleansing Facial Wipes. I literally buy these in bulk and have packs in every purse and car compartment so I never have an excuse not to take off my makeup at the end of the day. For a cleansing oil, I decided to use VDL Naked Cleansing Oil Cream (Strong), which I picked up in Korea and, despite the cutesy packaging, definitely lives up to its name and is the most heavy-duty oil in my arsenal. I'd cleanse with CeraVe Renewing SA Cleanser, which has a bit of salicylic acid to help control my recent spate of acne.

With my three-step process ready to go, all I had to do was start the experiment. For one week, I'd triple-cleanse every night, come rain or shine or drunken stupor, to see if it really is better than double-cleansing alone.

Tired and bleary-eyed, I didn't get around to washing my face until 11 p.m. or so. I had applied some relatively heavy eye makeup that day but had decided to skip the foundation since my skin had been rioting, as you might be able to tell from the giant red spot in the middle of the forehead.

Though I was annoyed about having to add another step to my nighttime routine when all I wanted to do was take off my pants and go to bed, the extra step really only added another minute to the process. And I think it was worthwhile because I was shocked by how much gunk came off my face with that wipe. Even though I wasn't wearing foundation, there was a surprising amount of brown residue that I can only assume was a mixture of eyebrow gel and dirt.

Then, when I went in with the oil balm, even more gunk came off, likely the waterproof mascara the cleansing wipe missed. By the time I washed with a foaming cleanser, my face already felt cleaner than it had in a very long time.

I arrived at my boyfriend's apartment around 2 a.m. after a night of casual drinking in Manhattan, and as I took this selfie, I had a moment of acute self-awareness in which I wondered why I volunteer to do things like take a selfie of my slightly-tipsy self in my boyfriend's bathroom at 2 a.m. and then start in on a three-step cleansing routine.

This is the kind of situation in which I would usually just wipe my face down with the cleansing wipe and call it a night. But slathering my face with cleansing balm after the wipe was kind of refreshing, especially since the formula from VDL has a strong citrus-y scent, and I felt like I had my life together in some kind of basic way as I rinsed and cleansed and rinsed again. The process was worth it, if only to make me feel like I had achieved something that evening.

Another late night, another case of raccoon eye. (Do you see a pattern emerging here?) My boyfriend walked into the bathroom as I was rubbing my face down with cleansing oil, mainly because he was wondering what on earth was taking me so long. As a result, I rushed through the rest of the process, sloppily rinsing off the oil and lathering up the cleanser. But I got it done, though I was fairly convinced I'd wake up the next morning with smudges of leftover mascara under my eyes.

Even after giving my face a deep-cleanse before going to bed, more often than not, I'll wake up with leftover mascara on my eyelashes. The probability of finding leftover makeup is even higher when I haphazardly wash my face, like I had done the night before.

So I was pleasantly surprised when I woke up the fourth day of the triple-cleanse experiment and had no remnants of makeup anywhere. I really had taken everything off, even though I had rushed through it. It's like that extra step of using a makeup removing wipe was protecting me from my worst, laziest self.

That night, I went to a party dressed like a Minion and danced up a storm, getting very sweaty in the process. The triple-cleanse really did make me feel like I was getting all of that debris off my face and I went to sleep, somewhat paradoxically, feeling pretty refreshed.

This was the first day of the experiment that I noticed a real difference in my skin when I woke up in the morning, enough so that I felt compelled to take this selfie within an hour of showering and getting out of bed. Despite all of the makeup I had been wearing and drinks I had been drinking, I was happy to see that my skin didn't look that bad. All the acne that had been plaguing my face that week had calmed down, and there were no signs of new spots.

It was Easter, so I spent the day at my parent's house with no makeup on, and, to be honest, it felt a little silly to go through an intensive multi-step routine at night since I hadn't really done anything that day. But taking the time to go through this process was a calming way to end the day, and I was still surprised to see how much gunk was taken off by the cleansing wipe despite spending the day bare-faced.

On Monday, the second to last day of this weeklong experiment, I started noticing my face getting oily, possibly from over-washing it. You can see some of the buildup on my forehead and nose. But I already have pretty oily skin, so other than that, there were no real changes. That night, I breezed through the whole triple-cleansing thing.

On the last day of the experiment, I again woke up with an oily forehead, so I used the Glossier Detoxifying Face Mask after showering in the morning, followed by a layer of Kiehl's Ultra Facial Cream. By the evening, my face was less oily than it had been the day before, and overall, I was pleased with how calm my skin looked. That red spot on my forehead was all but gone, and after having put on a bit makeup for a meeting that morning, I was actually excited to go and thoroughly wash my face.

Cruelly, I woke up with a zit on my cheek on the day after the experiment ended, but that probably speaks more to my hormones than my skincare routine because I'm sold on triple-cleansing.

The extra step of taking off that initial layer of grime with a cleansing wipe surprisingly makes a huge difference without really adding that much more effort or time to the whole process. I never woke up with leftover makeup the next morning and my face felt cleaner and looked calmer than it has in a very long time. Using a cleansing wipe in combination with an oil cleanser and a foaming cleanser ensures that you're going to sleep with as clean a face as possible, even if you sloppily go through the whole routine.

The only trick is making sure your skin stays moisturized and that the products you're using in this intensive routine aren't stripping your face of much-needed oils. Make sure you moisturize afterward, but otherwise, I'd say go for it! Your skin will thank you.

More like this
42 Black Owned Fashion & Beauty Brands To Support Today & Always
By Mekita Rivas, Shea Simmons, Kui Mwai and Dominique Norman
Selena Gomez Posted A No-Makeup Selfie & We Stan A Relatable Queen
By Olivia Rose Rushing
15 January 2023 Beauty Launches Our Editors Can't Get Enough Of
By Rachel Lapidos
The Case For Using Your Fanciest Beauty Products Every Single Day
By Carolyn Steber
Get Even More From Bustle — Sign Up For The Newsletter
From hair trends to relationship advice, our daily newsletter has everything you need to sound like a person who’s on TikTok, even if you aren’t.