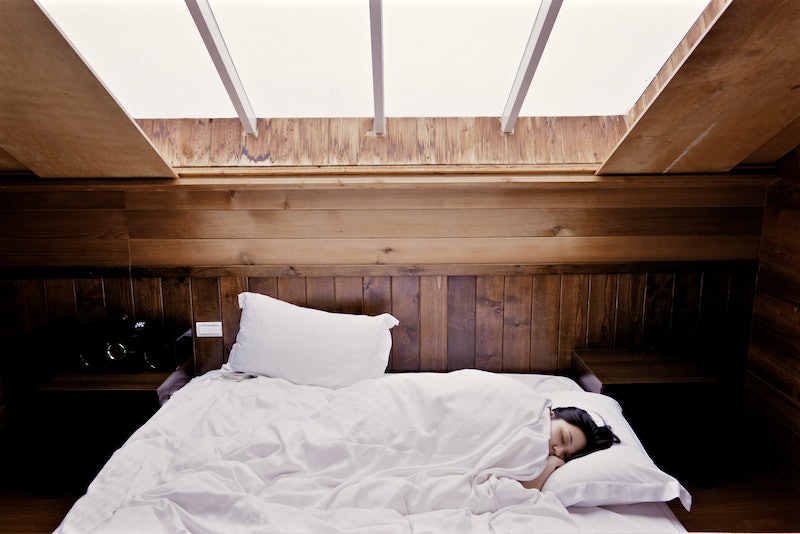 Ever watch a movie where a character decides it's bedtime, turns off the light and seemingly falls asleep easily and instantly? Did you watch this scene through a veil of your own tears, as this has literally never happened to you in your entire life? Shhh, shhhh, it's OK now. This is a safe space for people who toss, turn, count sheep, get up five times to pee (including two times that were actually false alarms), and otherwise struggle to fall asleep each night.

Maybe its been this way your whole life; maybe you come from a long line of insomniacs, and you're convinced there's no answer for you (besides maybe one of those sleep study things where you spend the night in a lab with a variety of science machines beeping importantly all around you). While that may be true, there's also a good chance that some incredibly simple habit you've never even given a second thought to might be keeping you awake long past your bedtime.

You think that's total nonsense? OK, how is this for a deal: read on for five of the most common things people do that keep them from falling asleep. If any of these habits sound familiar, maybe cut them out for a while and see if it helps; if none of them sound anything like you, and you still have trouble falling asleep, I'll call and make the appointment you for at the sleep lab. I'll go, too. They can set up our random beeping machines next to each other. It'll be fun.

1. Looking At Your Phone Or Computer

Our phones are basically tiny, wi-fi enabled demons designed to keep us from sleeping: not only does engaging your brain with your phone keep you from feeling sleepy and relaxed — and yes, even d*cking around on Snapchat counts as "engaging your brain" — but the blue and white light emitted by your phone or computer screen could be preventing your brain from releasing melatonin, the hormone that lets your body know it's time to go to sleep (and yes, TV can have this effect, too, though its impact may be less intense).

Though this is a pretty hard habit to break, it's also one of the lower stakes ones. Experts recommend that you stop looking at screens for an hour before bed — be honest, when was the last time you were doing something even mildly important when you were on your phone or computer an hour before bed?

But just knowing that might not be enough. Trust me, I know. I may be calmly suggesting that you keep phones out of your bed right now, but later tonight, I'll be throwing a tantrum like a child on a sugar crash when I realize I have to stop scrolling through the social media feeds of people I hated from high school and go to sleep. My point is, some of us can't rely on willpower alone to get off the phone, and must utilize more complex methods. I use an app called OFFTIME, which prevents me from accessing email or social media on my phone after a certain time (yes, you can access your accounts again if you have to, but the process of doing so is a pain — purposely so!). I've been doing this for about six months, and it turns out that laying off my phone in the hour before bed has not negatively impacted my social (media) life in any way — and though it might be psychosomatic, I do feel like I sleep better and more easily on nights when I get offline sooner.

2. Going To Bed At A Different Time Every Night

For many of us, having a totally consistent bedtime is not really realistic — I mean, who's going to say, "Gee, I'd love to go to your birthday party Friday night, but I can't because retaining a consistent circadian rhythm is really important to me, and in order to do that, I really need to go to bed and wake up at the same time every day."

I mean, you could say that; it'd be true! Going to bed and waking up at the same times every day makes sleeping in general easier; it's why people who work rotating shifts at their jobs often develop sleep problems. And there's no real getting around the importance of this one — sleep experts even recommend that people who are rotating shifts work up to their new bedtime, because getting a tiny bit less sleep in the short term is thought to be a lesser evil compared to jumping from bedtime to bedtime. So if you're just staying up late some nights because you can't stop watching lip gloss unboxing videos, CUT IT OUT.

But if you have inconsistent bedtimes because you're not willing to not have any sort of weekend social life, just because you have sleep problems, I feel you. What can you do to at least defray the damage, then? Try to keep consistent bed and wake times during the week, and avoid taking naps in order to stay up later on the weekend — people who are already dealing with sleep problems sometimes find that naps make them worse.

OK, this one is a bit different, because while drinking can impact your sleep, it doesn't usually do much damage to the amount of time it takes you to fall asleep. Hey, booze can make you sleepy when you're actually trying to stay awake; following that logic, if you drink it and then go to bed, you're basically just cutting out the middleman, right?

In the short term, yes; alcohol right before bed might make you feel sleepy and give you an extra push to conk out. But booze can also make you wake up later in the night — especially if you're already having sleep problems. Booze can disrupt REM sleep, which is why you might find yourself waking up after a few hours if you've had some drinks. On a more basic level, drinking before bed can also just wake you up because you have to pee. So if you've been doing your own personal last call every night, give it a rest for a while and see what happens.

Contrary to popular belief, there's nothing inherently wrong with snacking before bed — it won't wake you up, mess with your metabolism or make you gain extra weight. In fact, if you have a very early dinner, a snack before bed can help you sleep because it will prevent you from waking up due to hunger pains.

Messing with refined sugar and other junk food elements right before bed, though, is a different story. When I was growing up, my mom would end a particularly stressful day with a nightcap of ice cream right before bed. I carried this habit with me into adulthood, and until recently didn't quite make the connection that, gee, the nights I ate sugar right before bed seemed to also be the nights when I spent a good hour fruitlessly re-adjusting my pillows while I tried to fall asleep.

And sugar's not the only problem here; if you suffer from acid reflux, eating something deep-fried or covered in tomato sauce right before bed could leave you not only doing that thing where you stare at the clock and helplessly watch the minutes tick by, but doing it while your throat feels like someone filled it with rancid radiator fluid. So if you're prone to late-night snackery, you don't necessarily have to give it up — but do pay attention to what you're eating.

Lots of people will tell you that exercise late at night negatively impacts everyone's sleep, but that's not true — some of us are basically soothed to sleep by a nice 10 p.m. jog. But for others, the stimulating effects of exercise — according to CNN, exercise "raises your core body temperature, increases your heart rate and prompts your system to release...adrenaline" — can keep them awake for hours.

So if your sleeping troubles began right around the time you shifted your gym plans to align with those times they show the late-night Friends reruns, plan a week or two where you exercise several hours before you go to bed, and see if it helps. If it does, great! If not, well, luckily, the reruns will still be there for you.

More like this
These 3 Signs Are The Master Chefs Of The Zodiac
By Kristine Fellizar
These 4 Zodiac Signs Make The Best Bridesmaids
By Nina Kahn
The Zodiac Sign Pairs Most Likely To Have A Sibling Rivalry
By Kristine Fellizar
5 Signs You Have A Toxic Relationship With Yourself
By Lexi Inks
Get Even More From Bustle — Sign Up For The Newsletter
From hair trends to relationship advice, our daily newsletter has everything you need to sound like a person who’s on TikTok, even if you aren’t.