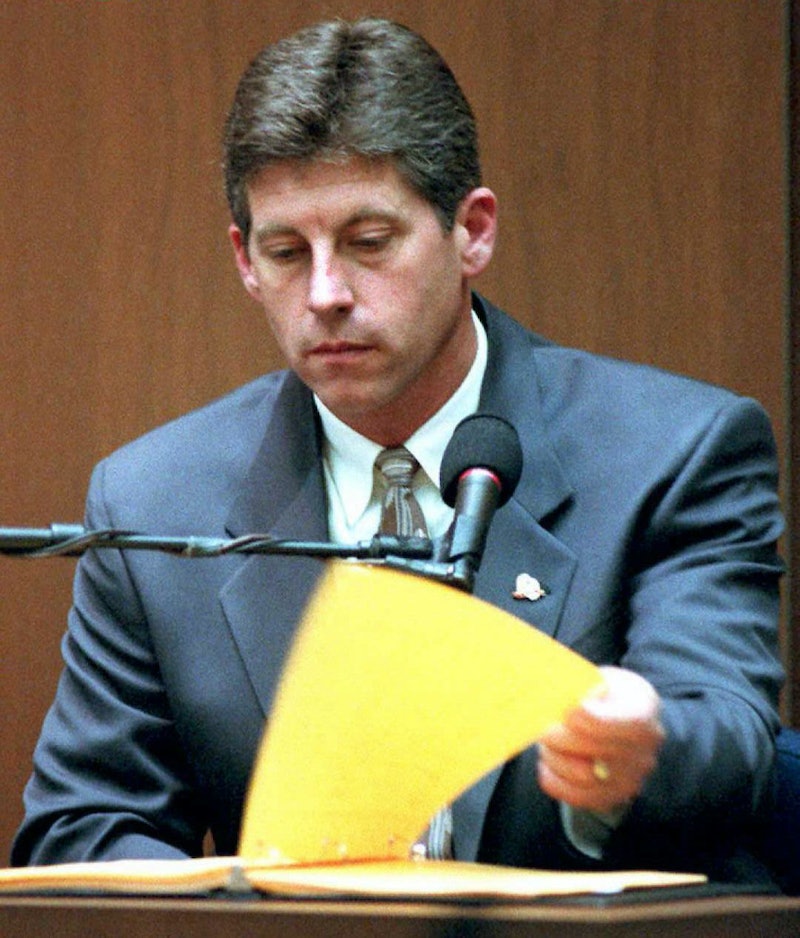 On Oct. 3, 1995, millions of Americans stopped what they were doing and tuned in to watch the O.J. Simpson verdict. He was acquitted of the murders of his ex-wife Nicole Brown Simpson and her friend Ron Goldman — but, in a strange twist, the only person who was convicted of a crime related to the trial was LAPD detective Mark Furhman. In Oct. 1996, The Chicago Tribune reported that Fuhrman had pleaded no contest to perjury charges and, as the result of a plea deal, he avoided jail time but was now a convicted felon. During the Simpson trial, Fuhrman lied under oath when he denied using racial slurs at any point during the past 10 years. Concrete evidence of his deceit was presented in the form of audio recordings — excerpts from the Fuhrman Tapes were played for the jury and it was a major blow to the prosecution's case.

Fuhrman's recorded words are undeniably despicable and shocking but, since they don't reference Simpson directly, many wondered why the Fuhrman Tapes were ruled admissible. In short, the tapes proved that Fuhrman had lied under oath in the Simpson case and therefore they were relevant to his credibility as a witness. After Judge Ito's decision, The New York Times published this excerpt from his ruling:

The court has reviewed each of the 41 uses of the racial epithet in question either by reference to the transcript(s), audio tapes or both. The court finds that each involves Fuhrman's use of the subject racial epithet in a disparaging manner within the time frame posed by the cross-examination and in contradiction to his testimony before the jury. It is therefore relevant and admissible as impeachment.

The defense requested that 61 tape and transcript excerpts be presented to the jury, but only two were ruled admissible, as reported by The Los Angeles Times. Ito made this decision based on which excerpts "directly contradicted Fuhrman's sworn testimony." Ito stated that Fuhrman's claims of fabricating evidence in other cases didn't mean he planted evidence in the Simpson case and he described it as "a theory without factual support." Here are the two excerpts the jury did hear:

The LA Times also reported that defense attorney Johnnie Cochran was furious that only two excerpts were played for the jury and he made this statement during an interview: "This inexplicable, indefensible ruling lends credence to all those who say the criminal justice system is corrupt ... This is unspeakable."

The following excerpts received a great deal of attention from the public and the media, but the jury did not hear them during the Simpson trial. In September 1995, The Associated Press reported that 39 comments were barred. Here are several examples, but be warned, they could be rather upsetting:

In his book Murder in Brentwood, which was published in 1997, Fuhrman apologized for using racial slurs but denied any wrongdoing in the Simpson case: "I apologize for the pain I caused with my insensitive words. However, one thing I will not apologize for is my policework on the Simpson case. I did a good job; I did nothing wrong. Yet I was blamed when the case fell apart."