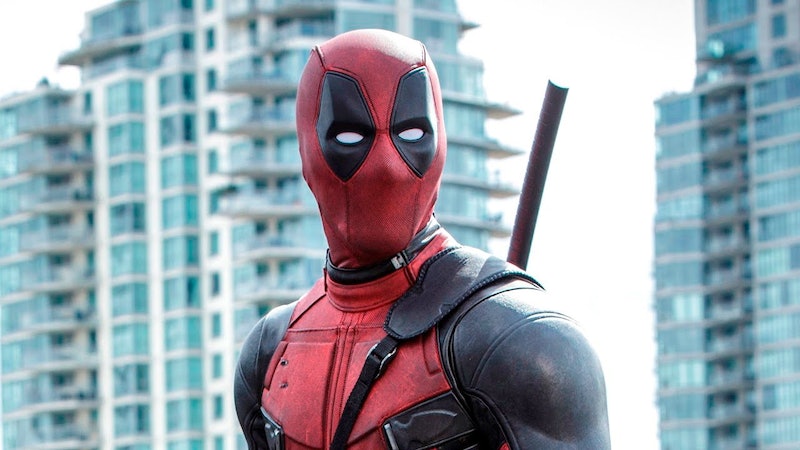 Deadpool — arguably the most self-aware, self-effacing, and even at times self-aggrandizing character fans have ever been gifted from the Marvel franchise — brings something more important to the comic book adaptation table than smart pop-culture references and liberal fourth wall breaks. It's — hold onto your Marvel hearts everyone — feminism. Yup, really; though Deadpool's whole mantra centers around being anti-everything — anti-superhero, anti-formulaic, anti-anything that comic book movies pat themselves on the back for — there's one thing he's not, and that's anti-feminist. Call me crazy, but Deadpool happens to be both a progressive and feminist hero.

Though the film doesn't pass the Bechdel test, and though Deadpool as a character might not react to certain situations in ways that would make other feminists beam with pride, that's OK. The newest anti-superhero superhero can be irreversibly flawed, obnoxious, anxious, and overall slightly deplorable, but that doesn't mean he can't also be pro-woman, pro-equality, and overall, a feminist. And I don't think he'd want you to forget that — being different than his superhero counterparts and a standout in the genre is so important to him. Here are 11 reasons why Deadpool is the unsung feminist hero you never saw coming.

1. He Stands Up For Women

In the beginning of the film, Wade Wilson (before turning into Deadpool) the mercenary takes a job getting a pizza boy to stop stalking a girl by threatening him. Though Deadpool's quick to point out he's not any type of "hero" — and though violence shouldn't be the answer — the act is still rooted in Deadpool's desire to stand up for women. Later in the film, when his girlfriend Vanessa gets assaulted in a bar, Deadpool shows that his policy for sexual harassment has zero tolerance.

2. He Does Not Objectify Women

The sex scenes in Deadpool aren't gratuitous, but central for developing the relationship between Vanessa and Deadpool. Viewers never feel as if Deadpool sees anything through a lens of misogyny, because he and Vanessa are equally exposed, and neither of their sexualities are made into huge deals.

3. He Has A Healthy Relationship With Sex

In that same vein, Deadpool's openness about sex and sexuality comes from a place of honesty and overall positivity.

4. He's Totally Open To Being Naked

Along with being sex positive, Deadpool also seems to be pretty body positive and comfortable in his own skin.

Deadpool never sees Vanessa's occupational choices as an issue, and even the scene of Vanessa at the strip club doesn't shame or exploit the workers.

6. He Doesn't Conform To Gender Roles

7. He's Not Confined By His Masculinity

Deadpool's acute awareness of his hyper-masculine superhero self subverts its importance. His anxiety about Vanessa rejecting him, or about people being repulsed by his deformity after he loses his quintessentially masculine good looks, speak to his ability to be OK with shedding that persona.

8. He Sympathizes With People Who Are On The Fringes of Society

Deadpool's otherness makes him sympathetic to those who have been pushed out of society for being different or undervalued.

9. He Questions What The "Rules Are" For Fighting Woman

Deadpool wonders out loud how to navigate a fight scene with a woman. It's a comment that speaks to the tropes of how women are portrayed in comic books and comic book adaptations, and though it's not necessarily solved, just talking about it is a step in the right direction.

10. His Jokes About Sex And Sexuality Aren't Filled With Spite

Penis humor might not be your cup of tea, but Deadpool's raunchy jokes — though about sex — aren't sexist. A lot of them, in fact, are sex-positive.

11. He Places Women Equally With Men

Generally speaking, Deadpool doesn't treat the women in the film differently than the men. That is, he makes fun of everyone.

The character's feminism isn't flawless by any means, but that doesn't mean that hidden somewhere deep down behind his misanthropic nature and sardonic humor, it isn't there.

More like this
These 25 International Horror Movies On Netflix Prove Fear Is A Universal Language
By Bustle Editors
Read The First Pages Of Emma Rosenblum’s Highly Anticipated Debut, 'Bad Summer People'
By Samantha Leach
What Joyce Carol Oates Knows About Fame
By Erin Somers
Women Around The World Are Cutting Their Hair In Solidarity With Mahsa Amini
By Darshita Goyal
Get Even More From Bustle — Sign Up For The Newsletter