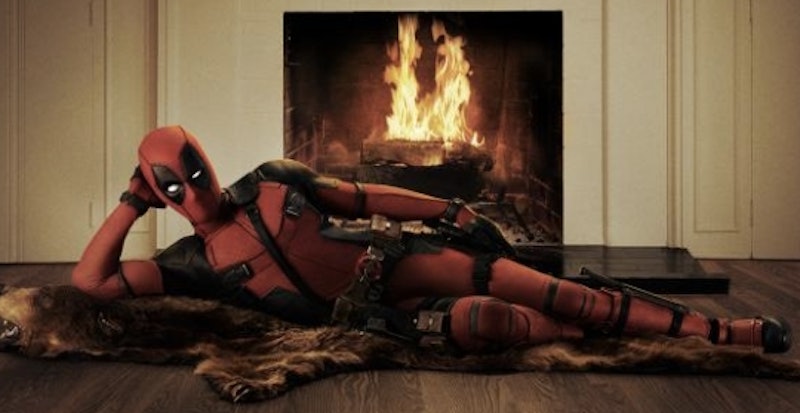 For the past decade, the world has been inundated with heteronormative superhero movies that tend to only reinforce gender roles, and refuse to break out of society's very old mold. Finally, we're being gifted with a new brand of superheroes whose sexuality is fluid, who don't abide by social norms, and who have no interest in playing by the supposed rules. Now, I know that Deadpool has been around for a long time as a comic, but the fact that Deadpool is finally getting made into a movie, and that international poster for Deadpool looks the way it does, is a major win for human beings everywhere!

As if it wasn't exciting enough to find out that Deadpool will be pansexual, the marketing team have done a stellar job in taking down just about every other superhero franchise out there. With Ryan Reynolds in the lead role, it's pretty much guaranteed that anything could happen, as he's known for his wicked sense of humor. His pose on the poster is a great indicator of what we have to look forward to in the movie, and it appears to be taking-no-prisoners in its approach to the superhero movie.

Standing in the very pose we most often see female superheroes in (at just the right angle to display breasts and butt), Deadpool is coy with the camera, and totally in on the joke. As has been pointed out over and again, the way that female superheroes are made to pose is often ridiculous, overtly sexualised compared to their male counterparts, and seriously degrading. Which is why it's so refreshing to see a male comic book character strike the pose often reserved only for women. It's the ultimate takedown, and the world is so ready for this change to happen.

With Jessica Jones finally giving us a new brand of superhero, uninhibited and unapologetic, it feels like we're entering a new age, in which sexuality and feminism will no longer be hidden from view. This change long overdue, and can't come soon enough.