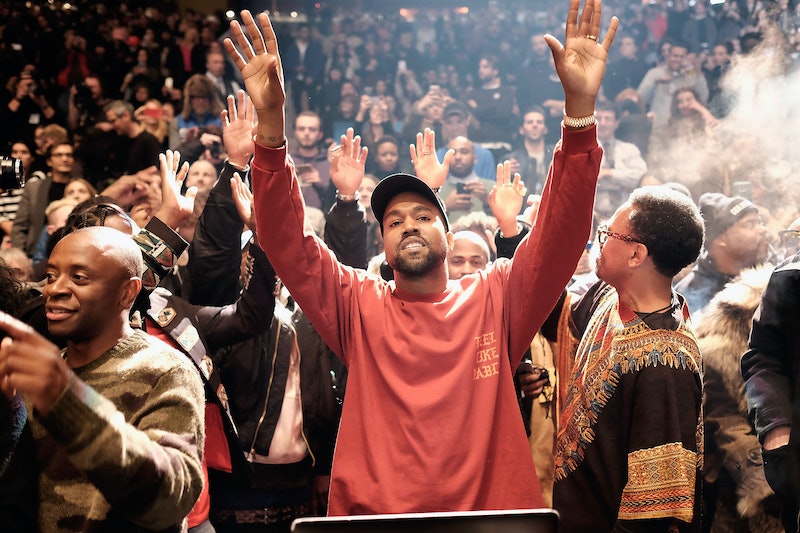 Kanye has finally thrown non-Tidal subscribers a scrap: on Monday, Yeezy made a track from his most recent, most mysterious studio album The Life Of Pablo, "Famous," available to stream Apple Music, Google Music and Spotify. If you haven't heard the track yet, it's the one that takes a pretty low shot at Taylor Swift, though the rapper said that "it wasn't meant as a diss" — which means it definitely was. The release of "Famous" on these other services begs the question: will the rest of The Life Of Pablo make its way in full to Apple, Google, and Spotify? It's hard to say, but possibly — probably — yes.

Though Ye's whole thing about TLOP has been exclusivity and evolution, the release of "Famous" across all three other platforms could be a sign that Yeezy is changing his definition of exclusive. Remember when he said not but six weeks ago on February 14 that his album would "never ever be on Apple, and never be on sale?" Well, that's already out, as it is in fact on Apple Music, which costs about $10 a month, and Google Music, which has the same subscription cost.

Even if he doesn't fold to the pressure of iTunes users' demands, there's a good chance that The Life Of Pablo will eventually show up on Spotify, especially because Yeezy purportedly has a new album coming out this summer and providing TLOP on Spotify would be a good move for promotion (not that Kanye needs help staying in the spotlight).

The release of "Famous" on non-Tidal streaming services in a long line of changes to West's most recent album, which started as SWISH, turned into Waves, and finally became The Life Of Pablo just a few days before it dropped. The rapper proclaimed that the album would be an living, breathing object rather than a finished product available in CD or iTunes download format. "Famous" is one of the products of that evolutionary vision. West already edited the lyrics of the track on March 13, changing the line "she be Puerto Rican day parade wavin'" to "she in school to be a real estate agent."

West debuted the album as the soundtrack to his show for Yeezy Season 3 at New York Fashion Week on February 11, which was supposed to be the public release, as well, but apparently 'Ye wasn't finished, and delayed the release a few days. Since he released the album on Tidal on February 14, Yeezy has already made changes to the tracks "Wolves" and "Famous."

Kanye's release of "Famous" on Spotify, Google Music and Apple Music might be a sign that he's softening, and the rest will be coming soon, if fans could just be patient, please. But they've already proven they can't, so it's just a matter of time to see what Yeezy's next move could be. If you have a Spotify subscription, you'll probably be in luck. It's the most likely of the three to host The Life Of Pablo.

More like this
Adele’s All-Female Lineup Includes Kacey Musgraves, Mahalia, & Self Esteem
By Shahed Ezaydi
Kim Kardashian Father’s Day Tribute To Kanye West Called Him “The Best Dad”
By Stephanie Topacio Long
Taylor Swift's “Carolina” Theme For 'Where The Crawdads Sing' Soundtrack Is Here
By Jake Viswanath
What Is Elvis Presley’s Net Worth? How The King Earned & Spent His Fortune
By Grace Wehniainen
Get Even More From Bustle — Sign Up For The Newsletter