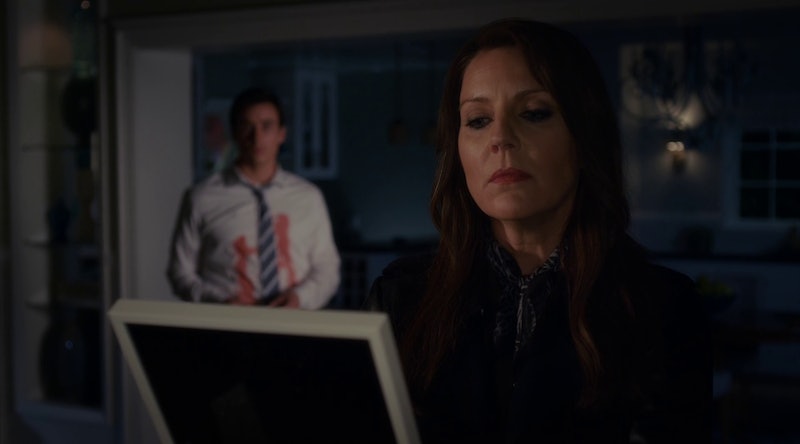 If you thought you had Pretty Little Liars figured out, guess what — you totally don't. The Season 6 finale of Freeform's mystery drama left fans jaws on the floor, and for good reason. After years of hinting that there was a twin lurking around Rosewood, Pretty Little Liars finally dropped the truth bomb, and it changed absolutely everything. Jessica DiLaurentis has an identical twin named Mary Drake who was a patient at Radley and is Charlotte's biological mother, which means that we have no idea whether anything that Charlotte told the Liars in the Season 6A finale "Game Over, Charles" was the truth. Did Charlotte cover up the truth about her mother being in Radley? It certainly seems that way given Charlotte's fake moniker of Cece Drake, and Mary's presence in Radley might explain a lot about another patient: Bethany Young. Could Mary be Bethany's mother in addition to Charlotte's?

It might seem like a crazy theory, but you know what else was a crazy theory? That Jessica had a twin in the first place. We still don't know much about Bethany, but we do know that she was in Radley alongside Charlotte, and that the two were roughly the same age. We also know that, according to Charlotte and some Radley files, that Jessica had an affair with Bethany's father. However, we don't know the validity of this alleged affair any more, because not only has Charlotte's credibility been shot thanks to the Mary reveal, there's also the real chance that the "Jessica" that Bethany knew was really Mary in disguise.

We don't know yet how Bethany's father and Jessica really connected, but what if the truth was that it was really Mary who got together with Bethany's father? Consider the possibilities. Charlotte and Bethany are close in age, which means that there's a slight chance that the two Radley patients could have had a deeper connection than just friendship. Perhaps Mary and Bethany's father became romantically involved sometime shortly before Mary went to Radley, which led to Mary becoming pregnant with both Charlotte and Bethany. Maybe Jessica agreed to take one of Mary's children and raise it as her own, but couldn't take both babies. The other child, Bethany, went to her father, and didn't know who Mary was until, inevitably, they ended up in Radley together.

We know that Bethany hated Jessica, and what if that was because she was furious at Jessica for not raising her along her biological twin sister? Perhaps Mary even pretended to be Jessica in order to visit both Bethany and Charlotte, and only revealed the whole truth about Bethany's parentage shortly before the night that Ali disappeared. Mary could have told Bethany that Jessica chose Charlotte to protect instead of her, which infuriated Bethany and caused her to go out of her way for revenge — which, ultimately, landed her in her grave.

We'll have to wait until Season 7 to see if there's a deeper connection between Mary and Bethany, but here's hoping that future episodes finally unspool this tangled mystery.