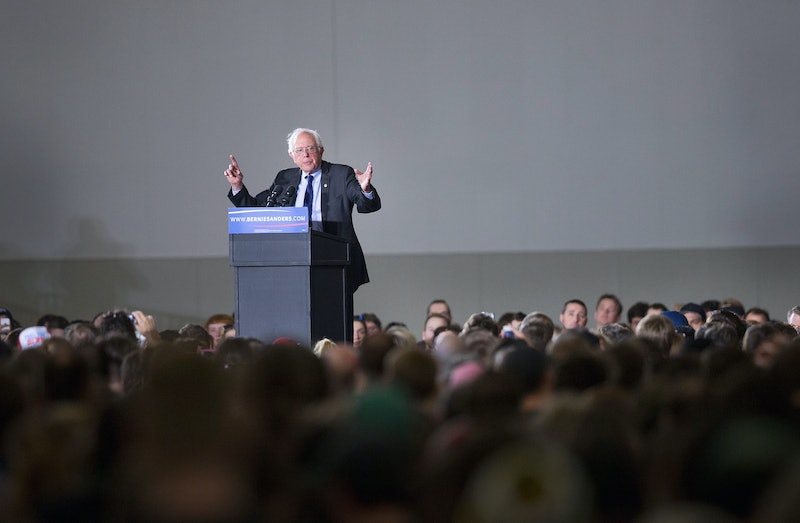 On Monday, California Governor Jerry Brown announced that the state would raise its minimum wage to $15 an hour by 2022 — a big win for labor organizers. Over the last three years, the labor group Service Employees International Union has funded a series of strikes for low-wage workers who have been fighting for the increase. California would be the first state in the country to raise the minimum wage to $15. Such reform has been central to Bernie Sanders' presidential campaign, and Sanders called out Hillary Clinton on Twitter after California workers' big win.

According to the worker group Fight for 15, which has been on this campaign over the last few years, this win to raise the minimum wage in California will impact the lives of 6.5 million workers. After the big win, Clinton tweeted her support for workers and Fight for 15, applauding both California and other states' work to raise wages. But Sanders wasn't having it. He responded on Twitter, stating that he agrees with Clinton, but that he supports $15 as a federal minimum wage, whereas she does not. Sanders has been consistent with his views on raising the federal minimum wage throughout his campaign.

Clinton has openly supported a $12 federal minimum wage, but "believes that we should go further than the federal minimum through state and local efforts," calling for "workers organizing and bargaining for higher wages." Clinton's proposal for a $12 wage nationally — and for workers to organize in their own locales — is based on the belief that $15 could be too high of a wage in certain states. However, the minimum wage would be raised over the course of a five-year period, likely not reaching $15 until at least 2022.

California's wage increase will happen gradually, starting from the current $10 minimum, then going to $10.50 in 2017, $11 in 2018, and a dollar more with each following year. Raising the minimum wage will actually save the government money, as fewer people would depend on government benefit programs like the Supplemental Nutrition Assistance Program (SNAP) to get by.

When it comes down to it, Sanders' support of raising the federal minimum wage to $15 an hour over five years isn't a huge cost, given that its impact will be felt significantly more by the communities who need it most.