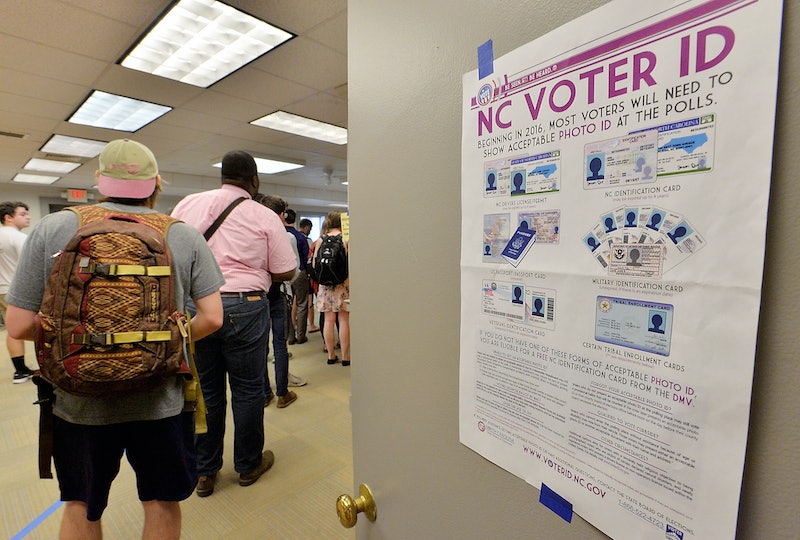 The presidential primary is in full swing and before you know it, Nov. 8 will be here and you'll be in line to cast your vote at the nearest polling place. Voting is a key part of the electoral process, and the right to vote is protected with four separate amendments to the Constitution; yet debate over voting rights persists. Since the Supreme Court invalidated a key part of the Voting Rights Act on June 25, 2013, several states have enacted restrictions on who can vote, presenting citizens with new obstacles to voting. It's important to know which states have strict voter ID laws and how you might be affected by such restrictions at the polls.

As of March, a total of 33 states require some form of voter identification for voting, according to Ballotpedia. That means well over half the county could be affected by voter ID laws. Of those 33 states, 19 require voters to present some form of approved photo ID — often one that's government-issued — at the polls in order to vote. Fourteen other states require identification but don't demand it be a photo ID. Of the 19 states that require photo ID, nine have what are known as "non-strict requirements," meaning a voter without an appropriate form of identification can still cast a provisional ballot. Of the 14 states that accept forms of non-photo ID at the polls, 12 have "non-strict requirements." So, which states are the strictest?

Georgia, Indiana, Kansas, Mississippi, New Hampshire, North Dakota, Tennessee, Texas, Virginia, and Wisconsin all have the strictest photo-ID requirements for voting. Some states, like North Carolina, recently amended earlier voting ID laws to bump them from the strict category into the non-strict one.

Lawmakers behind many of these voter ID laws (many which are overwhelmingly Republican) claim they're simple "common sense" measures enacted to "protect the integrity of the voting process," as South Carolina Gov. Nikki Haley said in early 2012 when the state decided to sue the Department of Justice over voter ID laws. Proponents of these laws have said voter ID laws won't affect a significant portion of the population because everyone has ID.

Except, possession of a government-issued photo ID may not be as prevalent as we're led to believe. A 2012 study by the Brennan Center for Justice at New York University found 11 percent, or more than 21 million Americans, don't possess a government-issued photo ID. The elderly, minorities, the poor, and young adults have been shown to be most affected by voter ID laws as they are most likely to not have the required identification, which is why critics of voter ID laws argue they're discriminatory and aim to suppress voter turnout. Moreover, for some voters, the issue isn't necessarily that they don't have photo-ID, it's that their ID is outdated and reflects an old address or surname which hinders the verification of their identity at the polls.

A study on the effects of voter ID laws by political scientists at the University of California at San Diego found "substantial drops in turnout for minorities under strict voter ID laws" during elections held between 2008 and 2012. According to the study, minority participation dropped 4.7 percentage points in general elections and 5.7 percentage points in primaries.

Are voter ID laws protecting us from voter fraud or suppressing the vote of a select few demographics? No matter which side of the issue your opinion falls on, it's important to not only be aware of how such restrictions on voting can affect you, but how they might affect other members of your community. Because every citizen's voice and vote should count.