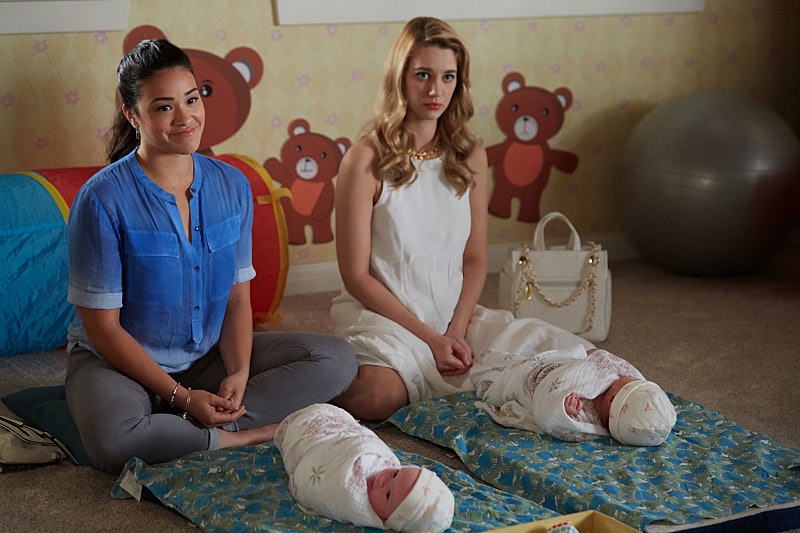 Despite what many movies and TV shows portray, adjusting to motherhood is never an easy task. I mean, suddenly you're completely responsible for someone else's well being other than yourself. It's a big deal and should therefore be treated as such, which is exactly why it was so important to see Petra struggling with motherhood on Jane the Virgin during Monday night's episode. In fact, after a visit to Jane's former New Moms group, she realized that Petra was likely suffering from postpartum depression and gave her the number of a doctor she could call to help her work things out. Not only was it great to see these two ladies being there for each other in such a big way, but it helped to highlight a significant obstacle that many mothers face.

Talking about her feelings out loud with fellow mothers made Petra realize that she's not alone. Many women struggle with adjusting to the stress of motherhood, so they understood what she was going through. Just like the doctor told Petra on the phone: "It's OK. That's OK." And the fact that she wanted to seek help proves just how great of a person and mother she truly is. Plus, let's not forget that Petra's mother, Magda, was never exactly a source of great maternal inspiration, so poor Petra's been forced to tackle this brand new world of motherhood all on her own. However, that didn't stop Magda from planting a seed of doubt in her daughter's head.

Petra decided to pay her mother a visit in jail to see if she had ever gone through a similar type of depression after giving birth to her. Naturally, Magda managed to only make her daughter feel worse about herself and the situation by telling her that she wasn't mother material and should give the twins away to someone else. So yeah, she definitely was not very helpful with this matter. (Or any matter, now that I think about it.) And the last thing we saw was Petra packing up a bag with her mother's words of "give them away" ringing in her ear. Is she running away or taking the babies somewhere? Only time will tell, but something tells me things are going to get worse before they get better.