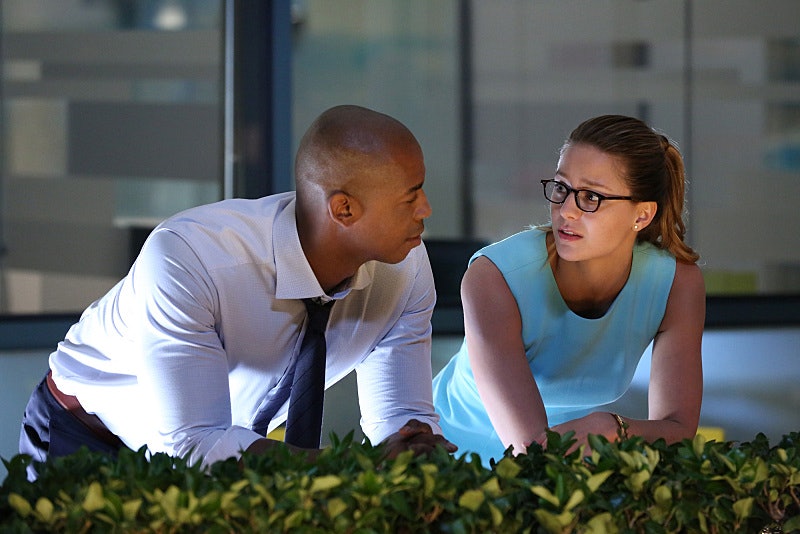 James Olsen can't seem to get away from Kryptonians. I'm not talking about what happened to the photographer in Batman v Superman, nor do I ever want to, frankly. On Monday night, Kara kissed James on Supergirl. Unfortunately, while he asked for more time in a previous episode, I don't think he's going to like the way he ended up getting it.

Two nosy nellies, Cat Grant and Barry Allen to be specific, called Kara out on her feelings for James. They gave her opposite advice. Cat Grant went for the Aaron Burr approach. "Try less. Shine more," she advised. Barry, who has some experience in the matter, instead insisted that sometimes it's best not to wait for it. Kara invited James over, started explaining a very sexy metaphor about the multiverse, then decided she was "much better at doing" and planted one on him.

Alas, the moment was short-lived. In a metaphor worthy of Buffy The Vampire Slayer, James turned to stone the second they kissed, causing Kara to second-guess herself and try to judge his reaction. In an interview with TVLine, executive producer Andrew Kreisberg even calls the moment "Whedonesque." Of course, James was under Kryptonian mind control courtesy of Non and Kara's late Aunt Astra. Myriad has arrived, and it took James along for the ride. It was bad timing, as always.

Did my Team Winn 'shippers notice that James got equally jealous when Winn and Kara shared a moment geeking out over science with Barry? Alas. I can't lie — I really enjoyed the scene in which Winn tried to talk Siobahn down when she was in Silver Banshee mode. It's nice to see him being active instead of passive, even if it's with another character, and this poor kid can't stop getting close with evil villains! He seems very chill and chipper about all of this, so I guess I'm OK with it too.

While this isn't my favorite relationship on the show, I'm honestly not mad about the development. I don't watch Supergirl for the romance, Kara can be with whoever she likes and she clearly likes James. This has been a long time coming, and I'm glad that Kara went for it. That's always important.