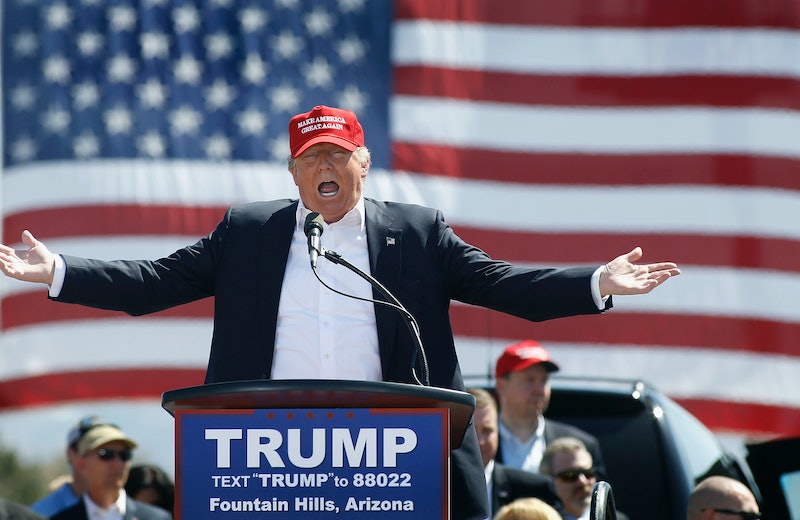 Although Donald Trump got more votes than anyone else in the Louisiana Republican primary, he’ll walk away with fewer delegates than second-place finisher Ted Cruz, thanks to a quirk in the state’s rules. Now, Trump is contesting Louisiana’s delegate allocation, filing a complaint with the Republican National Committee. His complaint is frivolous, though, because all of these rules were clearly stated ahead of time. Trump just got out-gamed.

First, a quick clarification: Trump initially threatened to sue the Republican National Committee, but he quickly backed down from that threat. Instead, he's simply trying to decertify Louisiana’s delegates internally through RNC procedures. So the fact that Trump won more votes but fewer delegates than Cruz is the result not of trickery, but of the Louisiana GOP’s rulebook. They require a candidate to win at least 20 percent of the statewide vote in order to get any delegates at all. If a candidate scores below that threshold, their share of delegates becomes unbound, free to vote for whomever they please at the Republican National Convention.

Only Trump and Cruz cleared the 20 percent threshold, and because the vote was so close, they both won 18 delegates. Meanwhile, no one else hit that mark, so the other 10 delegates in the state became unbound. On March 12, Louisiana Republicans held their state convention to determine which individuals would actually serve as delegates, and it was there that Team Trump got outmatched by Team Cruz.

According to The Wall Street Journal, the people elected to the unbound delegate slots at the convention all support Cruz over Trump. This means that, in all likelihood, they’ll vote for the Cruz at the national convention in July, which means that Cruz, in effect, just picked up 10 delegates. He did this by laying the groundwork ahead of time in Louisiana to ensure that his supporters would be elected to delegate slots. Trump did no such preparation in Louisiana, and that’s why he got burned.

In any event, the representatives that the Louisiana GOP sent to serve on these three committees are, you guessed it, Cruz supporters. And while they won’t necessarily play a decisive role at the convention, it’s a possibility that they could. It's never good when your opponent's lackeys are setting the rules, and that's precisely the situation Trump finds himself in now.

Trump’s campaign says that its representatives weren’t invited to the state convention, and so the state’s delegation should be decertified. But this is factually incorrect: Trump’s two state co-chairs did attend the convention. Oh, and this will be decided by none other than the RNC’s Credentials Committee — you know, which Cruz has already stacked with his bootlicks — so it’s probably not going to succeed.

Trump is learning the hard way that winning the most votes doesn’t always mean winning the most delegates. The complexities of each state’s rules are really important, and using them to your advantage is different from winning the hearts and minds of voters. Each state has an inside game, and in Louisiana, Trump lost it.