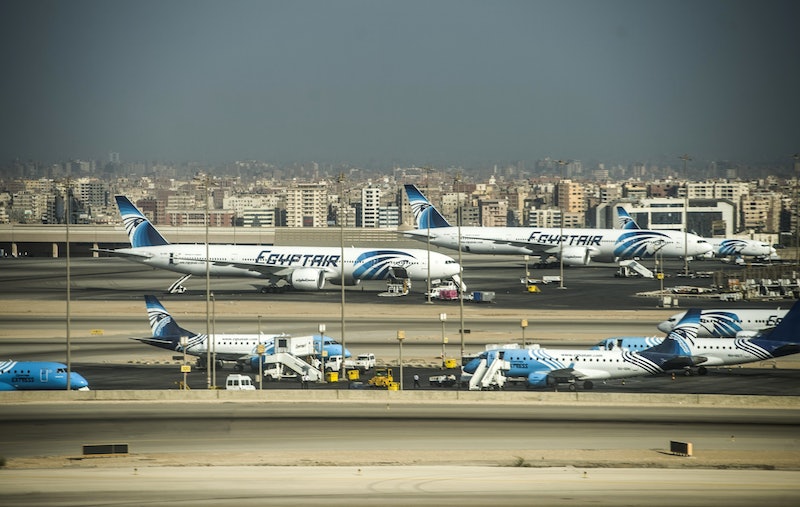 Early Tuesday morning, a man named Seif El Din Mustafa, who claimed to be wearing an explosive belt, hijacked a commercial plane on its way from Alexandria to Cairo. Upon landing in Cyprus, the EgyptAir hijacker asked to speak to his ex-wife. A source told NBC News that he is suspected to have landed the plane for "personal" reasons that involve his ex-wife, Marina Parashkou, who lives in Cyprus. She took part in the negotiations with Mustafa after being beckoned via a handwritten letter from him. Making dozens of passengers fear for their lives is at the top of the list of things you should never do for love.

Update: The hijacking situation is over. The hijacker is in custody, and everybody onboard the plane is safe.

According to the Cyprus Broadcasting Service, the man threw a four-page letter written in Arabic out of the plane and asked for it to be sent to his ex-wife. This has not been confirmed by authorities. The Guardian's Ruth Michaelson said that officials at Egypt's ministry of foreign affairs were not pleased by the man's motives:

He’s not a terrorist, he’s an idiot. Terrorists are crazy but they aren’t stupid. This guy is.

After publishing the comment, Egypt's Foreign Ministry spokesman denied that the Ministry made the statement, but Michaelson insists it reached her via electronic message. Either way, the remark bluntly delivers the truth of the matter, which is frivolously causing mammoth problems for the airline. In contrast, Cyprus President Nicos Anastasiades willingly made light of the situation, which could have been much worse. "Always there is a woman involved," he joked. For over three hours, Mustafa and seven others, including three passengers and four crew members, were aboard the grounded plane negotiating with one another. His estranged wife arrived on the scene after authorities read the letter.

According to updates in the case, however, the letter wasn't a typical love note, and Mustafa may have had some political motivation. Guardian correspondent Helena Smith, who has been reporting on the scene, said that it asks for the release of four female prisoners in Egypt.

So far, no information about Parashkou, the four female prisoners in Egypt, or the potential link between them have been released. The details of the relationship between Parashkou and Mustafa — and there's definitely a story — are likely to surface after the dilemma has been dealt with accordingly. Until then, Twitter users are dying to know just who this woman is. People do some crazy and oftentimes messed-up things for love, but hijacking a plane has to be a first.