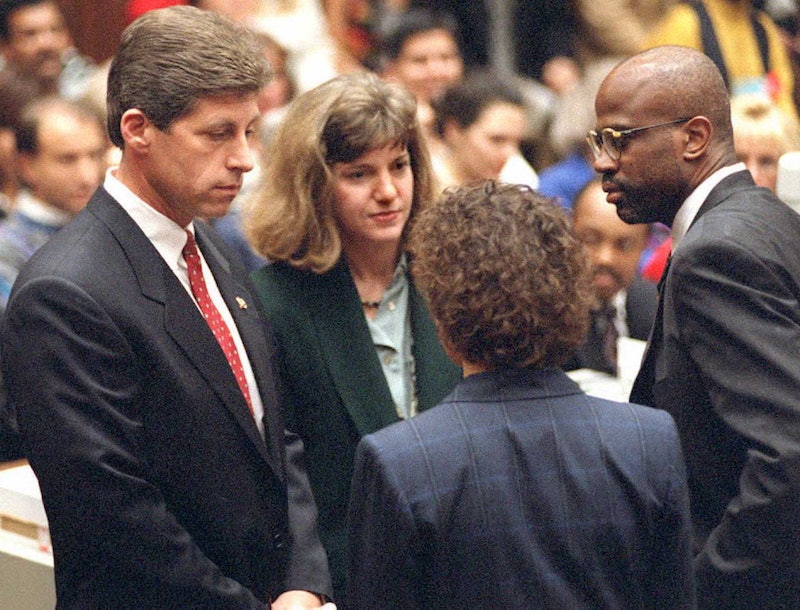 When O.J. Simpson tried on the blood-stained glove in front of the jury and it didn't fit, it was a major win for the defendant and his attorneys. As we've seen on The People v. O.J. Simpson: American Crime Story, Johnnie Cochran carefully constructed a defense that hinged on the theory that his client had been framed by corrupt, racist members of the LAPD. The discovery of the Fuhrman tapes, which proved that detective Mark Fuhrman had lied under oath about his use of racial slurs, added credence to this theory. The recordings and transcripts alleged that he had a history of racism, but did Mark Fuhrman plant evidence in the O.J. Simpson case? Twenty years after the trial, this question is still on many people's minds.

In September 1995, after two sentences from the tapes were ruled admissible in court, Fuhrman took the stand for a second time. As reported by The Los Angeles Times, the jury was not present when he was asked three questions by defense attorney Gerald F. Uelmen. Uelmen asked Fuhrman if his testimony at the preliminary hearing had been truthful, whether or not he had ever falsified a police report, and if he had planted evidence in the Simpson case. Fuhrman's response to all three questions was: "I wish to assert my 5th Amendment privilege." Here's the video footage:

The New York Times reported that Judge Ito ruled the jury could not be told that Fuhrman had plead the fifth because jurors often incorrectly assume that it equals an admission of guilt. Instead, he gave the jury the following instructions: "Detective Mark Fuhrman is not available for further testimony as a witness in this case. His unavailability for further testimony on cross-examination is a factor which you may consider in evaluating his credibility as a witness."

Because Furhman discovered the famous glove, it's the piece of evidence that's most commonly linked to the theory that alleges he framed Simpson. When Fuhrman testified in March 1995 (prior to the discovery of the tapes), The Baltimore Sun reported that Simpson's defense team didn't have evidence that Fuhrman moved or planted evidence, so they were careful to not make any direct accusations:

Mr. Bailey steered clear of stating explicitly that Detective Fuhrman planted the glove that he has said he found behind Mr. Simpson's house. The defense lawyer relied instead on suggestion, painting Detective Fuhrman as suspiciously over-eager, and said that his discovery of the glove when he was by himself made him suspiciously indispensable to the case.

However, once excerpts from the Fuhrman tapes had been played for the jury, the defense did claim that the detective had deliberately planted evidence. Although only two sentences from the 13 hours of tapes were admissible in court, they were enough to prove that Fuhrman had previously perjured himself when he stated that he had not used a racial epithet at any time over the past 10 years — and this undermined his credibility as a witness. But, perhaps more importantly, the jury heard audio footage of Fuhrman using the n-word, which bolstered the defense's claim that he was a racist individual who framed Simpson due to his hatred of the black community.

According to USA Today , the defense stated that the "glove behind guest house was planted by Detective Mark Fuhrman, a racist cop trying to frame Simpson" and "blood on [the] glove may have been planted by police." In addition to the glove, defense attorneys argued that blood at the crime scene could have been taken from a police crime lab vial and planted at the Bundy residence. A pair of blood-stained socks were found in Simpson's bedroom and the defense again suggested they had been planted by the police. However, Simpson's attorneys didn't specifically name Fuhrman as the individual who had planted the crime scene blood or the socks.

In 1997, the former detective spoke with The Seattle Times and said it was "a ridiculous accusation" that he had planted the glove. He also offered the following explanation as to why he refused to answer Uelmen's questions: "I was forced to take the Fifth (Amendment, against self-incrimination) because prosecutors wouldn't assure me they would ask questions that I could answer in a narrative fashion. I wasn't going to just let the defense ask their yes or no questions to help them mislead the jury."

There is no physical or eyewitness evidence that proves Fuhrman planted the glove, but it appears that the combination of the glove not fitting Simpson and the audio evidence of Fuhrman's use of the n-word was enough to raise reasonable doubt amongst the jurors. Since the burden of proof lies with the prosecution and not the defense, the reasonable doubt was enough to help Simpson's attorneys secure an acquittal.