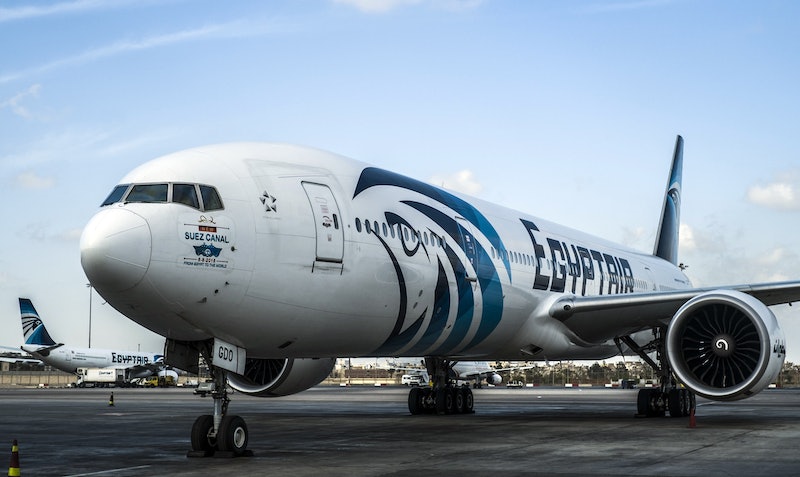 Terrorism is no laughing matter. Tuesday morning, thanks to a suspect described not as a terrorist but "an idiot," an EgyptAir flight en route to Cairo from Alexandria was rerouted to Cyprus after a passenger threatened to blow up the plane with a suicide belt. Luckily, everything turned out just fine; everyone is safe and the hijacker is on the ground and in custody. Details are still emerging as to what on earth he was thinking, but one likely scenario that emerged during the hostage negotiation was that a lovesick 27-year-old hoped to win back his ex-wife. And that's when Twitter stepped in.

Leave it to the Twitterverse to make jokes even as several hostages remained onboard the plane (aka not a funny situation at all). Look, it's totally not appropriate — especially if love is not behind the act after all, and especially given all the hijackings of the past.

And yet ... Some of the jokes are kind of funny. Now that everyone is accounted for and safely off the plane, you might want to check these out. They might not renew your confidence in flying, airport security, or a vacation to see the pyramids, but they may just renew your belief in how insane love can be — again, a completely and utterly crazy in love version that even Beyoncé would not endorse.

It Sounds More Innocent In Rhyme

But How Does She Know That He Really Loves Her

You've Got To Feel For The Airline

This One Just Makes Me Think of M.I.A.

Finding Love In A Hopeless Place

Everywhere I Look Around

And For Any Copycat Romantics Out There:

But seriously, no funny business on future flights. Send a freaking e-card!