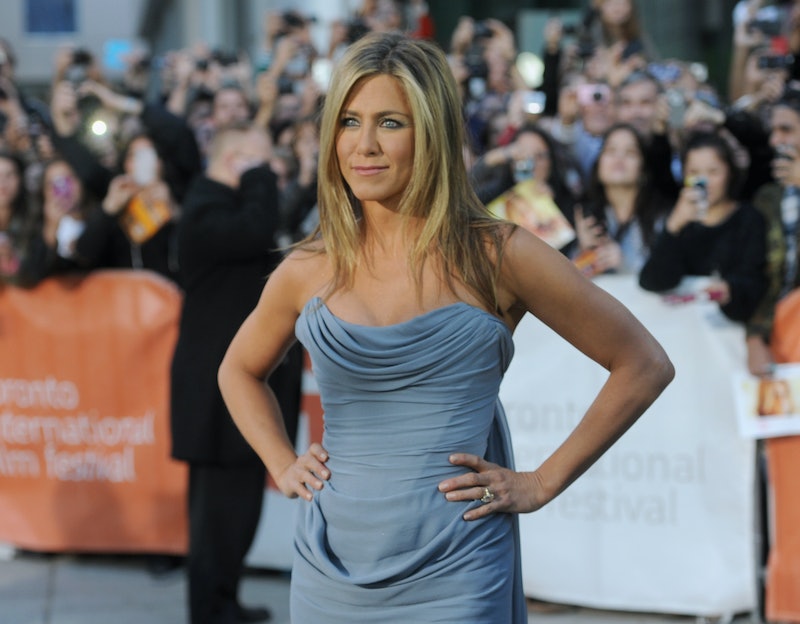 If you're one of those people who likes to keep tabs on which scripts from film's yearly Black List are actually getting made and with who, we've got good news for you: Patrick Tobin's Cake is going forward with Jennifer Aniston attached to star. While Tobin's probably celebrating as we speak, this news is a win for Aniston as well.

Aniston is set to star as "the acerbic, hilarious Claire Simmons, who becomes fascinated by the suicide of Nina, a woman in her chronic pain support group. As she uncovers the details of Nina’s suicide and develops a poignant relationship with Nina’s husband, Claire also grapples with her own very raw personal tragedy."

Cake landed itself on the 2013 Black List, that sacred rundown of unproduced screenplays Hollywood's producers are most impressed by. Cake scribe Tobin is so new to the biz that he doesn't even have an easy-to-find IMDb page yet — there are multiple Patrick Tobins on IMDb including a grip on A Very Harold & Kumar 3D Christmas , PA on a bunch of reality TV, or writer on the 1996 film No Easy Way . Regardless, Cake's Tobin probably having a very good day. Aniston's also executive producing the film, with Daniel Barnz (Won't Back Down) directing.

Aniston has, of course, been one of the queens of the rom-com for quite a while now. And while I love me some rom-coms, it's always a special joy to see Aniston stepping out of that box she and Hollywood have long conspired to keep her in. Aniston's often flourished in darker divergences from her rep — we saw that over a decade ago with the positive reviews of her performance in The Good Girl, and we saw it again for the praise she got for her bit in Horrible Bosses. Hopefully this movie will further that even more.