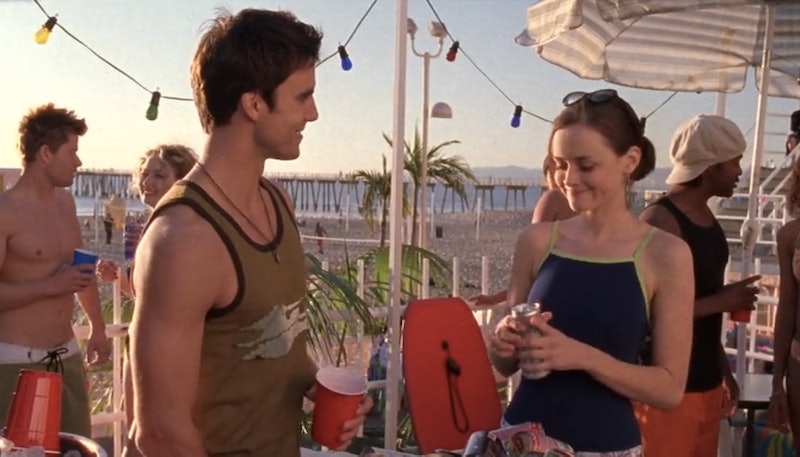 Rory Gilmore doesn't seem much like a spring breaker. We only see her at the beach once aside from her misguided jaunt to Florida, and it's in February on Cape Cod. She was never one to really party it up, choosing fun that was more low-key, like reading or watching terrible movies with her mom. Which is why it seemed more like an anthropological study, a lesson in being a real college student, when Rory actually decided to head down to Florida for spring break in an episode of the Gilmore Girls called "Girls in Bikinis, Boys Doin' The Twist." In fact, it's such a thorough study that from this episode alone, we can actually put together a complete Gilmore Girls guide to spring break.

In this episode, Rory, along with Paris, doesn't do the whole spring break thing the way we've seen it done on MTV (and definitely not the way it looks in Spring Breakers). It's no surprise really, since Rory even says she's "not really a spring break kind of gal" when the idea of going first comes up. She is not one to just give up, though, so she tries, valiantly, to get drunk, make out, and do things she'll probably regret — on a very G-rated level, of course. In the end, Rory and Paris, who stands out like a sore thumb in her wide brim sun hat, inadvertently put forth a spring break lesson for fans who are similarly inclined. Bottom line: do the college right of passage on your own terms (with a few cliché moments thrown in for good measure).

1. Tip As You Go Along, So You Get The Best Of Everything

Don't want to be in a motel room with sticky beer-covered floors? Just throw around a few Andrew Jacksons to the staff; this way they're ready and waiting to take care of you. Paris swears by this technique and says that waiting to tip to the end is a rookie mistake when it comes to vacationing.

2. Keep Properly Sunscreened At All Times

As Paris points out, 10 minutes in the sun can cause irreparable skin damage, so make sure you're reapplying liberally. Especially if you're as fair-skinned as Rory, who Paris sweetly calls "Casper."

3. Stay Away From Any And All Windows

This is Lorelai's one piece of advice. She knows there's a very good chance they'll be drinking, and windows definitely complicate things for those who don't have good balance. The best way to keep yourself from falling out of a window is to just stay away from them.

4. Find Your Own Madeline & Louise To Help You Do Spring Break Right

When Paris and Rory run into their old Chilton buddies, they find that Madeline and Louise have been on spring break for weeks and now rule this town. "The chamber of commerce must be thrilled," Paris jokes. But these girls definitely aren't kidding around, sharing the rules for proper spring breaking, which include finding the right hot club each night and adjusting your sleeping patterns for maximum partying.

5. But Don't Be Afraid To Break Some Of The Rules

These girls are under 21, so Madeline and Louise suggest a few ways to get past any age restrictions — namely, flirting and making out with any guy you see to get in the club (PSA: none of this behavior is a good idea, folks). In one of Paris' weaker moments, she decides to plant a kiss on Rory that sadly proves Madeline and Louise right. The move leaves her feeling like she should have stuck to her guns and not participated to that degree. #NoRegrets, until you definitely have one.

6. Do Your Research Before Heading Into Town

Kind of a no-brainer when it comes to vacationing, but it may be something you forget when you go on spring break. What if you just want to rent a movie and get a pizza? You're going to need to know where the best video store is, especially if you want to rent The Power of Myth, a six-hour documentary about comparative mythology. A perfect evening, courtesy of Rory Gilmore and Bill Moyers.

Bill Moyers is great and all, but, if you head down to the beach to party, you probably should, you know, party. And do so with other people. There's nothing wrong with doing spring break how you want, but don't be afraid to try something outside your comfort zone. Who knows, you may even like it?

8. But Stay Away From The Banana Eating Contest

No matter how hungry you are, a banana eating contest is not really a way to boost your potassium. Paris learned this the hard way so you don't have to.

Back in 2004, this was the band that was going to change your life so it was definitely an experience worth having. And, lo and behold, this was the hot party of the night, allowing Rory and Paris to check that and dancing off their spring break bucket list. The band may change, but the need to see good music stays the same. The change-your-life-part, though, definitely varies.

Which means, don't be concerned about the fun you think everyone else is having. This vacation is all about you. You can't force yourself to have fun; you just have to seek it out. Someone else's idea of fun may not be yours, and that's perfectly OK.

11. Stop Yourself From Drunk Dialing Anyone

Especially your ex, especially if he also happens to be married. Even if your psychic friend tells you the marriage isn't going to last, it's just not cool.

Rory has a few drinks, enough drinks to have her taking turns with Paris on who will hold the other's hair back while they throw up. Possibly, all over the beach. What she learned, and certainly a right of passage to many a spring breaker, was what she likes to eat after having too much alcohol. For Rory, it was mac and cheese all way. "My baby's discovered her first hangover food," Lorelai tells Rory over the phone. "Wish I had a picture to put by your clay handprint."

Once you've checked off everything you need to do to say you've officially participated in the social ritual, you can go home happy. Even happier, if you can fly back in first class and get an extra bag of peanuts.

What this really shows is that there's no right or wrong way to do spring break; there's just your way. And, if you think you're a Rory or a Paris, you may just want to follow their lead. (That Power Of Myth viewing, very optional, of course.)