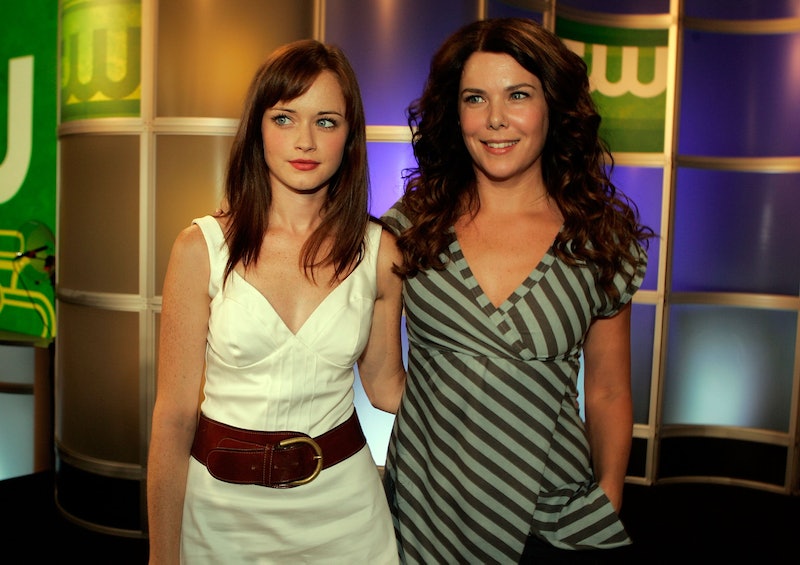 For anyone who was excited, but kind of confused by reports that a Gilmore Girls revival might be happening at Netflix, but will only include four episodes running 90-minutes each, TVLine may have just figured out the reason for this unconventional twist. According to the website, the episodes will span all four seasons, meaning there will be an episode that takes place in the winter, the spring, the summer and the fall. Not too farfetched a concept being that Carole King, who opened each episode of the seven year long series with the theme "Where You Lead," let us know on Tapestry that friends will be there any season you need them, all you have to do is call. Netflix apparently heard us loud and clear.

Though we still don't know yet whether Melissa McCarthy will be back or if Rory is still single and following Barack Obama around, we do know that Stars Hollow is a nice place to visit any time of the year. Gilmore Girls always helped us get through things no matter the season with some coffee and some witty one-liners. Seriously, oy with the poodles already!

In anticipation of this new — still unconfirmed — development for the upcoming episodes, we've come up with the perfect seasonal guide to watching Gilmore Girls in winter, spring, summer or fall.

"The Lorelais' First Day at Chilton"

It's hard to forget this Season 1 episode, if not for those cutoffs Lorelai wears to bring Rory to school. First days of school are hard, but with your mother not quite appropriately dressed to meet your headmaster, it becomes a little tougher and a whole lot more embarrassing. It also introduced fans to the wacky world we'd entered into with this show. One we'd certainly never want to leave willingly.

In this Season 1 episode, we celebrate Rory's October birthday with not one, but two parties. One of which includes a cake with Rory's face on it. Yes, that was Emily Gilmore's idea. But it's the party Lorelai throws for her only daughter that shows the special bond this mother-daughter duo has by giving us the amazing GIF above.

It was the year of three Thanksgivings in Season 3 that only the Gilmore girls could find room for. The highlight is Melissa McCarthy's drunkenness as Sookie attempts to deal with her husband Jackson deep frying a turkey. Nothing a few drinks couldn't solve.

"The Lorelai's First Day At Yale"

Copper boom! In this Season 4 episode, the Lorelais head to college and for the first time are forced to be a part. While Luke gets stuck trying to figure out what to do with a mattress, Lorelai showed why she's actually a cool mom, throwing the best first night of college party ever. Complete with a menu from around the world.

The Chilton formal in Season 1 had Rory showing off the designs of Lorelai Gilmore with Dean Forester by her side. She also got to enjoy a kiss to the sounds of Mazzy Star's "Fade Into You" — the perfect make-out soundtrack for a girl that brings a book with her to a dance. Of course, Emily Gilmore is more concerned about this boy and why he's honking outside Lorelai's door and not bringing her granddaughter back in time for curfew. Or, at all. It's one of the first fights the Gilmore girls will have over Dean — that includes Lorelai telling Rory she's going on the pill — but it certainly wouldn't be the last.

When a snowstorm leaves the Independence Inn guest-less for an elaborate 19th century seven course dinner, Lorelai invites the town to take part in the festivities. While I'm sure the food was delicious in this Season 2 episode, all I can remember is that horse-drawn carriage ride that had Jess totally showing why he was the perfect match for Rory (hint, it has something to do with Björk), and officially made me #TeamJess4Ever.

As we learn throughout the series, Lorelai rejoices in the falling of the first snow, but that doesn't always mean it brings her a winter wonderland. In this Season 5 episode, she falls out of love with it. Luckily, Luke is there to build her an ice rink to help her fall back in love. Let it snow, let it snow, let it snow.

In Season 7, the Gilmore girls postpone Christmas with a late celebration that shows us that after the holidays is the best time to buy a tree and wear ugly sweaters. But the real story here is the letter Lorelei writes about Luke's character, which didn't make Chris too happy, but certainly excited fans. The phrase "monkey, monkey underpants" never made so much sense.

It's spring time, and love is in the air for the Lorelais. In this first season's finale, Lorelai is given a thousand yellow daisies from Max Medina, who so wants to marry her. And Rory gets to finally tell Dean she loves him for the first time in the best way ever: "I love you, you idiot." Better words were never spoken.

It's spring break, and Rory and Paris aren't sure they're exactly doing it right. And, since they're too busy watching The Power of Myth to get to the beach, we have to agree with them. Luckily, Madeline and Louise were there to teach them the rules of proper spring breaking, and soon enough they're doing what all the kids do: checking out The Shins, doing some random kissing and leaving drunken voicemails to exes. Totally nailed it.

The renaissance wedding of Luke's sister Liz to TJ is the perfect place for Lorelai and Luke to have their first official slow dance. Yes, Luke can waltz.

"You trust me?" And with those words we all knew Logan Huntzberger wasn't going anywhere. Rory may have been in full-on journalist mode to cover this Life and Death Brigade event, but she couldn't help but jump with Logan.

Taylor Doose's plan for the Spring Fling in Season 7 leaves everyone trapped in an elaborate entire town-sized haybale maze. But, it also gives Lorelai and Luke a chance to reconnect. Something we would wait all year for.

In Season 2, Rory is not really enjoying her summer as she tries to figure out how she's going to up her resume and get into Harvard. The answer: Habitat for Humanity and a hammer that has feathers attached to it.

"I Can't Get Started"

It's Sookie's wedding day, and Jackson is wearing a kilt. But there are so many other things going on in this Season 2 finale, like Rory trying to decide between Dean and Jess, with an unexpected kiss helping her decide what she's doing that summer.

This Season 3 opener starts off with a strange dream about Luke that has Lorelai questioning her feelings, while Rory returns from D.C. to see Jess kissing a new blonde. What a way to spend the First Annual Stars Hollow End of Summer Madness Festival, right? Seriously though, good luck getting this song out of your head.

In Season 4, we got the Luke/Lorelai kiss we've been waiting so long for, and also got to see Kurt naked. That's something we weren't necessarily waiting for, but we got it anyway. We also got to see Rory make a mistake with much bigger consequence then she could even imagine, proving why pro and con lists are so important.

Rory's just graduated Yale and is getting ready for her first big job: following pre-President Barack Obama on his campaign trail. And, of course, everyone in town wants to say goodbye. This season finale — no matter how you feel about it — had you in tears, wishing like Lorelei there was more time.

Of course, this is just a seasonal primer that focuses on those episodes where the weather is almost like another character. To really get yourself prepared for the revival and fully immerse yourself in all things Gilmore, I recommend watching all 153 episodes. That should cover you for at least half of the year's seasons anyway.

More like this
“The Door Is Always Open” For Another 'Breaking Bad' Spin-Off, Says AMC Boss
By El Hunt
18 Unanswered Questions From 'The Hills' That Still Haunt Us Today
By Ivana Rihter
20 Photos Of "Beefy" Jeremy Allen White To Tempt You To Watch 'The Bear'
By Radhika Menon
Everything To Know About The Flash Season 9
By Brad Witter
Get Even More From Bustle — Sign Up For The Newsletter