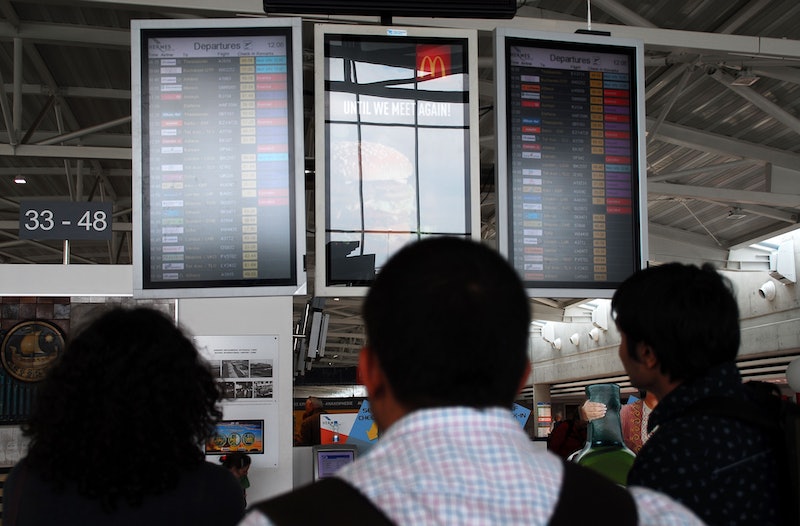 Tuesday morning, Seif El Din Mustafa hijacked EgyptAir Flight MS181 en route to Cairo from Alexandria. After much alarm, it became clear that the EgyptAir hijacking was not an act of terrorism, and the hostages were freed after the flight landed in Cyprus. Mustafa was immediately arrested. Though the hijacker's motives remain unconfirmed, Reuters reported that some believe Mustafa was protesting the imprisonment of Egyptian women, while others suggested that he wanted the plane rerouted to Cyprus because his ex-wife is a resident there.

Update: The person in the photo has been identified by The Telegraph as Benjamin Innes, a British man who was one of the last captives left on the flight. His relatives dispute the photo's designation as a "selfie."

Unsurprisingly, the Twittersphere has watched this event closely. Many actually joked about Mustafa hijacking a plane in the name of his ex-wife, while others have rightfully condemned his actions — no matter his motivation, he put over 50 people in danger. However, the trending hashtag, #EgyptAir, received even more fodder Tuesday morning after an apparent selfie with the EgyptAir hijacker emerged on social media.

Understandably, Twitter went wild, and many lauded the man for the "selfie," which has not yet been confirmed as such. According to The Daily Mail, which initially published the photo, the identity of the man in the photo remains unknown, and it is therefore impossible to know his motives for being in the photo — no matter how bizarre a "hijacker selfie" may be. However, even if it was evident that Mustafa's suicide belt was fake, taking a selfie with him would be an undeniably inappropriate response. Hijacking a plane is not a matter to be taken lightly. It is not a joke, but rather a serious and potentially lethal offense.

Many tweets make important points about the reality of the EgyptAir hijacking.

Many of the reactions to the EgyptAir "selfie" only highlight the absurdity of so many social media responses to entirely unfunny events. Thankfully, everyone on the flight was unharmed.

More like this
Taylor Swift, Kerry Washington & More Speak Out On Uvalde Mass Shooting
By Jake Viswanath
Photos Of Boris Johnson Drinking At A Downing Street Lockdown Party Have Surfaced
By Bustle UK
7 Gun Control Advocates To Follow On Twitter
By Madhuri Sathish-Van Atta
TikTok Is Using A Kendrick Lamar Song To Post Thirst Traps
By Courtney Young
Get Even More From Bustle — Sign Up For The Newsletter